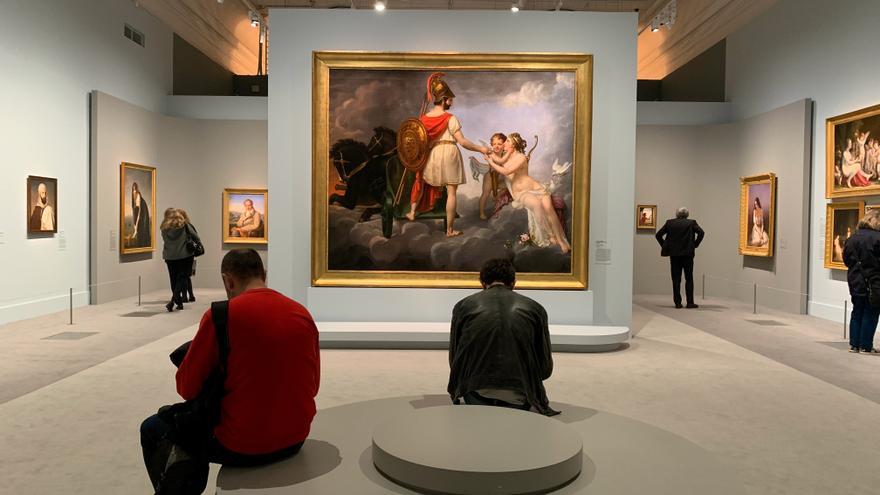 Paris, May 22 (EFE) .- They neither had a minor role nor were they limited to intimate painting. Paris strongly vindicates the names of female artists who have gone unnoticed in Art History, with two major exhibitions at the Pompidou Center and the Luxembourg Museum.

As "a combat against oblivion", the curator Martine Lacas defines the exhibition "Peintres femmes, 1780-1830. Naissance d'un combat" (Female painters. Birth of a combat), which will be accessible in the Luxembourg Museum, next to the French Senate, until next July 4.

About 70 works ranging from the pre-revolutionary period to the French Restoration are exhibited in this museum with the aim of ending the clichés and "Manichean differences" that have traditionally weighed in the studies of female painters.

"The exhibition is proof that at this time there was an abundance of creators with quality in their productions, and that they were not content to make a maternal or gender painting," says Lacas in statements to EFE.

According to this doctor in History and Theory of Art and researcher, it is frequent to respond to the reason for the absence of "great women artists" in terms of prohibitions: the veto of women to paint nudes, their lower level of training, the vocation of marriage or maternal, etc.

But although these arguments are exact, they are not the only ones, and Lacas considers that the term "great artist" assigned to men is a "presupposition", an "aesthetic and political intention" that has determined that a part of the documentary research has been omitted.

In other words, if these women were not classified as "great artists" it is because there was no interest in them being so, that they were made invisible.

In addition to the most famous names, such as Élisabeth Vigée-Lebrun or Adélaïde Labille-Guiard, the exhibition brings together excellent painters such as Constance Mayer, Hortense Haudebourt-Lescot, Marie-Victoire Jacquotot, Adrienne-Marie-Louise Grandpierre-Deverzy or Marie-Gabrielle Capet , to name a few.

De Capet, her popular "Workshop Scene" shows how female workshops were places of creation in which young women received technical classes and became professional. There, women shared their knowledge and refined their strategies as painters.

For many, for example, abandoning historical painting was a personal decision since "economically it was more intelligent to turn to everyday scenes because the new bourgeois public asked for more portraits".

"It is not necessary to attribute everything to a prohibition or to sexism. In this period there was an unprecedented phenomenon of serious training among women who had a professional vocation, who received medals, who ran extremely famous workshops and who hung out with the Parisian intelligentsia", adds Lacquers.

The problem with this exhibition, confesses its curator, has been having to give up "all the works" that he would have liked to exhibit due to lack of space, the vast majority in the hands of French museums outside of Paris or private collectors.

A HUNDRED OF ARTISTS IN THE POMPIDOU

"Elles font l'abstraction" (They make abstraction) is the name of the extensive exhibition at the Center Pompidou, which will travel to the Guggenheim in Bilbao in October with some changes and Spanish additions, and which focuses on the work of the artists of the abstract art.

The starting point, as in Luxembourg, is to reread the history of abstraction from the end of the 19th century to the 1980s, showing the contribution of some 110 women artists and highlighting the "invisibilization process" by the artist. that has been marking your work.

In more than forty rooms, the Pompidou shows creations of plastic arts, but also dance, photography, cinema and decoration; rediscover the work of spiritualist roots of Georgiana Houghton in the 1860s, of the women of the Bauhaus school or the global reach of these creators.

The Cuban Carmen Herrera, the Argentine Martha Boto, the Brazilian Lygia Clark, the Chinese Irene Chou or the Lebanese Saloua Raouda Choucair serve as examples of how pictorial traditions traveled beyond the European or American sphere.

The most prominent figures, such as Sonia Delaunay-Terk, Vanessa Bell (Virginia Woold's sister) or Helen Frankenthaler have small monographs within the exhibition, which emphasizes the context of the artists and what favored or limited the fame of these pioneers.