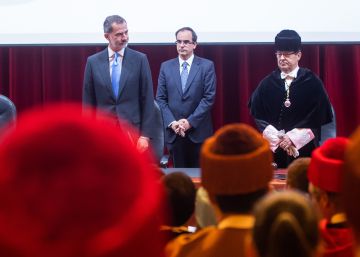 Spanish universities start a new course with many urgencies and the response without deadlines of a government with elections around the corner. The president of the CRUE (Conference of Rectors), José Carlos Gómez Villamandos, asked for help on Monday during his speech at the solemn act held in A Coruña under the presidency of the King and with the assistance of the acting Minister of Science, Pedro Duque . Gomez has warned against the budget constraints suffered by campuses, the need for structural reforms in the university system and an "economic structure" that condemns graduates to emigrate. "The labor market forces young people to seek employment abroad, where your training and qualification is, look where, valued and recognized ”, has affected.

The budget per student in Spain is the fifth part that the universities of the European Union enjoy on average, has illustrated who has been the maximum representative of the rectors since last May. Despite this, Gómez added, the University has fulfilled for decades in Spain "personal and professional aspirations of many families", a function that now wobbles. "The social elevator is in danger as a result of lower public investment and a labor market and an economic structure that widen the social gap and generate populist approaches," said the rector of Córdoba.

Like Gomez, the rector of A Coruña, Julio Abalde, has demanded a new law on universities that guarantees “stable and sufficient” funding and the “necessary autonomy” to end “bureaucratic corsets that undermine their competence and efficiency” . The cuts in the crisis, Abalde said, subtracted from the campus 10,000 million euros and 1.20% of the GDP that Spain invests in R & D & I is far from the 3% that Europe had marked by 2020 .

After the lament of the rectors, both Felipe VI and the acting Minister of Science have praised the "quality" of the Spanish University and its resistance despite the cuts imposed by austerity. Duque has stressed that the campuses managed to "maintain and even improve their results" during the crisis, but has admitted, without giving time, the "need" for a new law that "raises reforms to solve chronic deficits." The socialist minister has included among those changes the creation of “mechanisms to attract both young scientists and established scientists ” and the “adaptation of training to the new labor reality”, although its reference to the labor market was in a different line from that of the rectors. Duque has complained that "the levels of overqualification are very high compared to the European average."

The King has affirmed that "the challenge lies in adapting an institution with so many centuries of history so that it remains central today and tomorrow, even at the pace of the accelerated changes of our time." Felipe VI has called to “strengthen studies in technology and computing” but “without forgetting” that scientific development raises “questions that must necessarily take into account humanistic conceptions and knowledge”.

The presidency of the King has been attended by positions and leaders of PP and PSOE. Meanwhile, at the gates of the Coruñés Rectorate, a hundred people have protested against the presence of the monarch convened by the Galiza pola República platform and the Right-to-Decide Pole, composed of about twenty parties, unions and cultural and historical memory organizations, among They BNG, Podemos, Esquerda Unida, Anova, En Marea and Equo. The entity, which has carried a photo of Felipe VI as a child with his father Juan Carlos I and the dictator Francisco Franco, demands a referendum on the monarchy and the elimination of noble titles that "distinguish coup plotters, Francoists and criminals."

If the rectors have outlined on Monday some of the challenges that lie in higher education, the professor at the University of A Coruña Amparo Alonso Betanzos outlined with her inaugural lesson entitled Artificial intelligence: to be or not to be in the 21st century the challenges facing the entire humanity. "Both opportunities and challenges in terms of artificial intelligence (AI), their algorithms and the use of personal data will require companies, governments and citizens who understand data, algorithms, their scope and limitations," he warned. This Vigo engineer. "AI education should be taken care of at all levels to generate a mature and critical society."

The also president of the Spanish Association of Artificial Intelligence has requested training in Computer Science and Technology since Primary, changes that "also help reduce the tremendous gender gap" in the degrees of Computer Engineering. The expansion of artificial intelligence, he explained, will require professionals who have knowledge of "ethics, communication, critical spirit and creativity" and who receive training "throughout life." And it will be essential "more regulation" and face "ethical dilemmas" and a "social and political debate" on how to make the "transition" from the current production model (with a universal basic income, with reduction of working hours or taxes to robots, for example).

For Spain, Alonso said, there is a "clear opportunity" to join the head of an investigation that "can double the rates of economic growth in the short and medium term" and create "stable and quality employment". But for this, he added, he must recover the emigrated talent and "correct as soon as possible the current decline in graduates" in Science, Technology, Engineering and Mathematics. In Spain, the number of graduates in these disciplines is expected to fall 3.5% annually in the next five years.