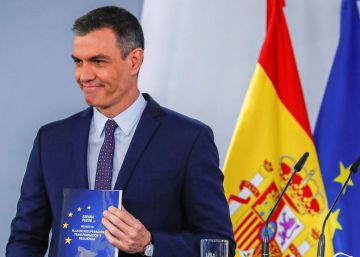 The Government has finally put in black on white its calculations on the additional growth that the nearly 140,000 million euros in European aid on the way will contribute to the Spanish economy that will pay for the two hundred investments and reforms included in its Recovery Plan, Transformation and Resilience. Overall, according to the provisional document, the program will contribute two additional points to the annual increase in GDP, although in the medium term its impact will gradually fade to just four tenths. A residual contribution that, in any case, should allow potential economic growth to be above 2% per year in the next decade.

The detail of the draft, which the Government will complete in a matter of days with the additional nuances required by Brussels, largely explains the new economic forecasts updated last Friday. After the bad start to the year left by the pandemic and given the delay in the implementation of the plan, which the Executive assumes that it will not begin to bear fruit until the second semester, the Economy reduced from 9.8% to 6.5% the estimated GDP advance for this year, when aid would contribute less than two points to growth.

The push would be somewhat higher in 2022, when it would advance by 7% and lose steam, up to 3.5% in 2023 and 2.1% in 2024. In this period, Spain will receive close to 80,000 million euros in subsidies, while in the following three years it aspires to obtain up to 70,000 in soft loans with which to revive growth again. The strategy, as advanced yesterday by the President of the Government, Pedro Sánchez, after the analysis of the plan carried out by the interministerial commission, is to place potential GDP growth above 2% per year as of 2030.

Thus, for the period 2021-2023, the effects on GDP and employment will be “intense”, as detailed in the document, thanks to the measures that form the axis of the urban and rural agenda, on the one hand, and the from the modernization and digitization of the industrial fabric and recovery of tourism, to the other. In the world of work, again in the short term, the axis of the new care economy and employment policies will also have striking effects.

In the long term, however, the investments that will result in higher GDP growth will be those related, on the one hand, to education, continuing training and capacity building and, on the other, to the pact for science and innovation. . However, both axes, for 2021-2023, have a “moderate” effect, according to the document. In the long term, the digitization of the company and the sustainable energy transition will also be notable. The potential impact of the urban agenda, so important in the next two years, will nevertheless be “moderate” in the long term.

The document, which Sánchez will detail today to the Congress of Deputies, also offers some key details of the package of reforms that Spain will commit to its European partners in exchange for aid. These include fiscal measures to advance “towards a sufficient and more efficient, equitable and fair tax system, and that guarantees the sustainability of public finances”, after the crisis has triggered the public deficit from 2.8% to 10.9 % and public debt from 95.5% to 120% of GDP. To this end, he states, “a reform of the tax system will be undertaken, to guarantee a flow of resources that allows responding to spending and investment needs, contributing to the reduction of the structural deficit and the maintenance of the welfare state, bringing the tax burden of Spain to the average of the countries of the euro zone ”.

The measure will include “tax adjustments (with an in-depth review of the multiple existing exemptions and bonuses)”, to complement the measures already in place for digital (Google tax), financial (Tobin tax) and anti-tax fraud (pending). Much of the focus will be on a battery of green taxes like plastic fees on the way.

In turn, “to rebalance the pension system”, “adjustments and incentives will be incorporated to bring the effective retirement age closer to the legal one, the contribution system for self-employed workers will be modified, the development of supplementary pension systems will be promoted, and the separation of financing sources will be completed ”.

In addition, “the procedure for integrating contribution gaps will be reviewed, to address the reality of increasingly fragmented work careers, especially associated with temporary employment, which is particularly detrimental to young people, as well as women, that experience more interruptions in their working life on average ”. Finally, the Government states that “the adaptation of the system requires a gradual adaptation of the maximum contribution bases that must be concurrent with a modification of the maximum pension so as not to affect the contributory nature of the system.”

On the side of the labor reform, the Government focuses on the simplification of contracts in order to generalize the use of the indefinite, restrict that of the temporary and value a form of training. In addition, the plan proposes to seek alternative adjustment formulas to dismissal, for example, by redesigning the temporary employment regulation files (ERTE) that it has been squeezing in this crisis.