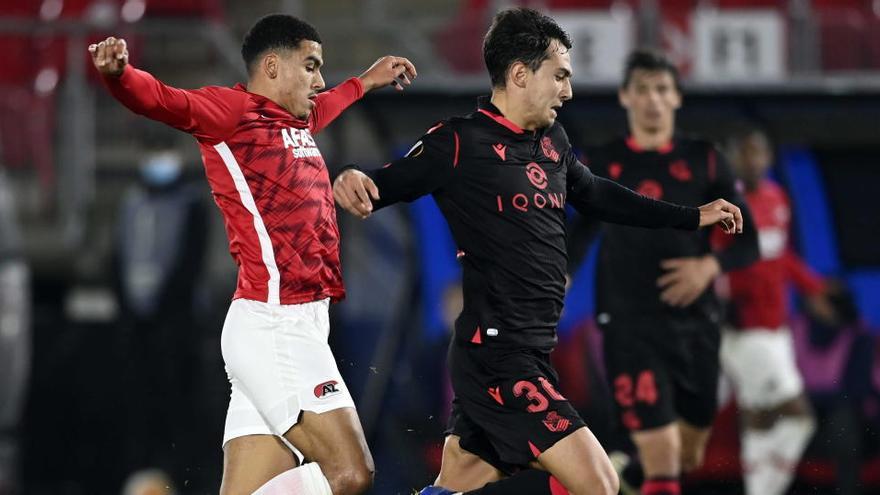 The Real society got a meritorious point in the field of AZ Alkmaar, as they suffered to defend the goal against a much more offensive team than the one that played three weeks ago in San Sebastián, although Cristian Portu and Mikel Merino were about to score for the San Sebastian towards the end of the match.

With the results of tonight, group F tightens up. Napoli leads the standings with nine points, followed by Real Sociedad and AZ Alkmaar with seven and Rijeka closes, with zero points.

Imanol Alguacil chose Adnan Januzaj to replace midfielder David Silva, a loss due to injury that was noted in the match. Robin Le Normand in defense and Martín Zubimendi and Cristian Portu in midfield were the news regarding the LaLiga match against Cádiz.

Arne Slot for his part raised a much more offensive poster than the one presented in the San Sebastián match that the donostiarras took away. With Myron Boadu on the bench, the Dutch sought the goal through the dangerous trident of Calvin Stengs, Albert Gudmundsson and Jesper Karlsson.

The two teams started scoring, measuring each other, knowing that an imbalance at this point in the championship can be decisive. Both knew that Napoli had it easy in their match against Rijeka and the Italians did not fail at home.

Real Sociedad started with the lines well advanced and exerting pressure that forced the Dutch to go long. Stengs, the most decisive player in the local attack, fell several times into the offside trap.

The match was back and forth, with chances for both. The first was from Real Sociedad, a header from Alexander Isak culminating a good corner kick from Januzaj that hit a defender.

On good display from AZ Alkmaar, Karlsson advanced on the left and he made a low horizontal pass that walked through the Real Sociedad area until he found Svensson, who finished off awkwardly.

That play heated up the game. In the next game, Oryazabal and Isak understood each other perfectly in a beautiful combination and the ball reached Januzaj on a tray, but the ball bounced a little and the Belgian sent it too high.

The subsequent opportunities for Real Sociedad came from set pieces, with a free kick and a couple of corners. It is evident that Alguacil has rehearsed with his own, because in each corner they tried something different. Tonight, however, none of those formulas saw the goal.

AZ Alkmaar almost took the lead in the 30th minute with a quick counterattack. Stengs crept into the area from the left to the baseline and delivered a death pass to Midtsjo. The Norwegian’s shot touched Oryazabal, the ball became poisoned and Remiro pulled out a prodigious hand that saved the goal.

Shortly after, the referee made a mistake and called Isak offside, which was not, a play that if he had gone ahead could have declined the score, since the forward was left alone in front of the goalkeeper.

After the break, AZ Alkmaar got into the role of home team and chained three dangerous occasions. The first was a shot from Karlsson that cleared a defense to corner, the second a header from De Wit that Remiro saved by putting his leg. In the continuation of that play, Koopmeiners launched a surface-to-air missile that crashed into the crossbar.

Donostiarras suffered, as the Dutch pressed in those first bars of the second half, but little by little they were deflated.

Oyarzabal, possibly the best of the team, caused a foul on the edge of the area that tensed the local defense. The free kick hit the barrier, fell to Cristian Portu and his shot hit Willian José’s back.

Neither team seemed to settle for the draw and the game went crazy in the last minutes. Zakaria Aboukhlal headed a cross from Myron Boadu too high, a good opportunity for the hosts. Then, Mikel Merino entered the area and his shot went crying near the post, in the last of the San Sebastian.

Incidents: match corresponding to the fourth day of group F of the Europa League played behind closed doors at the AZ Stadion. Before the start of the match, a minute’s silence was observed in tribute to Diego Armando Maradona. Right after the kickoff, several flares streaked across the Alkmaar sky, some falling onto the grass and had to be removed by the Dutch club’s staff.