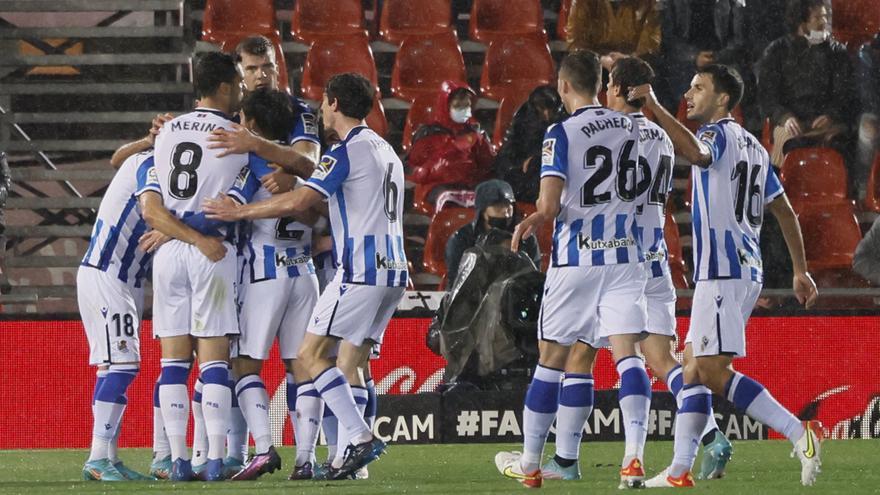 The Royal Society of San Sebastian sits on the Europa League and is located at a point on the Champions League after defeating this Wednesday by 0-2 to the Majorca in the pending match of the twenty-first day of the Spanish LaLiga Santander with goals of David Silva in the first part and Mikel Merino in the second.

The Imanol Alguacil group always controlled the actions and took into account Merino to her great figure. The Navarrese provided the pass for the first goal and scored the second to sign victory number 12 for his team, the fifth as a visitor of the season.

Mallorca tried it, but it was not successful in the final meters. The third loss in a row, fourth in his field, prevents him from moving away from the red zone of the table.

The Basque team tried to monopolize possession of the ball, as Luis García Plaza had already warned - tonight in the stands due to suspension - and patiently sought the way to harm the vermilion in a few first minutes without a clear dominator.

La Real could not impose their game and Mallorca, with Pedro Rostoll on the bench, tried to well-shaped bands where Maffeo and Oliván deepened, but in both cases, without danger some in both goals.

La Real faced the clash with eight casualties in their ranks which forced Imanol Alguacil to line up Gorosabel, who had already played against Osasuna, and Jon Pacheco on the flanks accompanying Le Normand and Ariz.

Mallorca came out with two changes compared to last day against Valencia -Amath and Oliván replaced Ángel and Costa- and looked for the goal with the skill of the Japanese Take Kubo and the aerial power of the Kosovar Vedat Muriqi with his 1.94 meter height. height.

The Gipuzkoan team found a huge hallway at minute 35 that Mikel Merino and David Silva made the most of; The Navarrese leaked an extraordinary pass and the Canarian, with his usual mastery, turned it into the first goal of the game and of his personal account this season.

Mallorca was touched. Despite the fact that he reached the rival area well, with the speed of Take and Amath Ndiayé - Ángel's substitute - he was unable to hit the last pass. Kosovar Vedat Muriqi, well controlled, missed several passes. The duel of giants who starred with Alexander Sorloth, 1.95 meters tall, was favorable to the Norwegian in the first half.

The Mallorca came out determined to look for the tie on resumption. He had it Kubo (min. 54), but he hit him in a defective way with Remiro fallen on the ground and unable to intervene. Mikel Merino did not fail shortly after to score the second goal by taking advantage of a loose ball in the area, which, as the match was, seemed definitive.

It was a blow that ended up quelling the enthusiasm in the stands and the faith of the local players, who were able to concede a third goal, after the omnipresent Mikel Merino crashed a ball into the crossbar (min. 66). La Real controlled the actions well in the final stretch and prevented Mallorca from getting into the game with a goal.

Triumph more placid than anticipated for the people from San Sebastian, who have regained a place in the Europa League and are fully aiming for the Champions League. And a blow to the vermilion in their aspirations to get away from the relegation zone.

Incidents: Postponed match corresponding to matchday 21 of LaLiga Santander played at the Visit Mallorca Estadi in front of 11,550 spectators. It rained during some phases of the match.