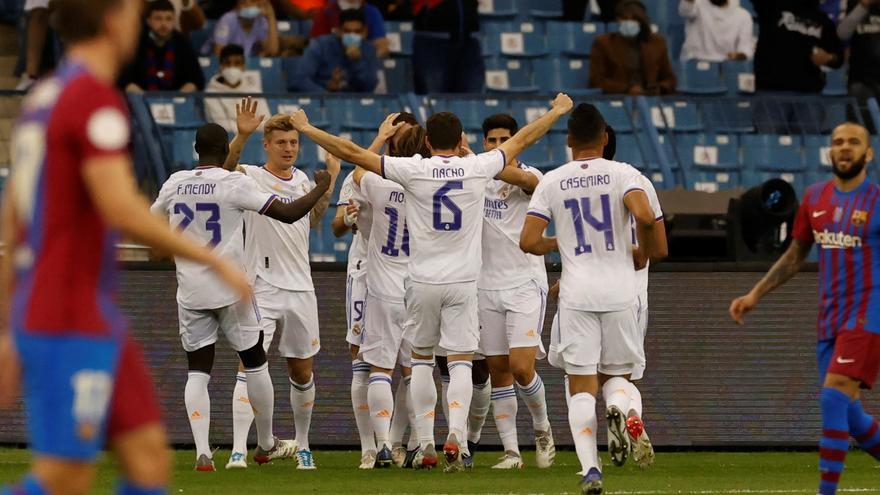 A Real Madrid most lethal won in extra time by 2-3 thanks to goals from Vinícius Júnior, Karim Benzema and 'Fede' Valverde still Barcelona which confirmed its growth in the semifinals of the Spain Supercup, in which the goals of Luuk de Jong and Ansu Fati at the King Fadh International Stadium in Riyadh.

The white forcefulness in the offensive facet was too much for a Barça that did not exist until half an hour of play to later complete a few 90 minutes remaining that confirmed in a first-rate challenge that the arrival of Xavi Hernández to the bench has changed his face.

Real Madrid took control of the danger as soon as the game started based on fluid transitions that had as finishers Marco Asensio and Vinícius Júnior.

The Barça, on the other hand, did not manage to disturb Thibaut Courtois until minute 18, when Dani alves a white wall was found when firing from the front.

Real Madrid's reply was lethal. Another swift counterattack, this one commanded by Karim Benzema, connected with the feet of Vinícius Junior, who won the race against Ronald araujo before defining overlooked before Ter Stegen.

It was the 24th minute and the events of the match were cheering the public of the King Fahd International Stadium from Riad, of majority madridista. The chants in favor of the white team were a keynote and in the equator of the first half the fans dared with the first wave that went around the stadium.

But, despite the clear white dominance on the pitch and in the stands, Barcelona overcame the blow and already had Two occasions to tie for around half an hour with a header from a reborn Luuk de Jong that ended up in the hands of Thibaut Courtois.

It was an omen. When the first half died, the Dutch scored for the third consecutive game thanks to his instinct to set foot in the face of a rebound from Eder Militao inside the area, thus achieving a draw that at that time did not reflect the merits made by the two teams.

Hours before the match, there was a lot of optimism in the Barcelona expedition, although some authorized voices from the top admitted that perhaps the match had arrived two weeks earlier than appropriate because many players were just returning from injuries important.

One of them was Ferran torres, with whom Xavi Hernandez He tried to give a mental blow at the beginning by daring to start him even though he had not played a game since October 10. But the experiment did not go well for him and the coach replaced the Valencian with Ez Abde at half-time, at which point Pedro González 'Pedri' reappeared to replace a limping Frenkie de Jong.

Carlo Ancelotti, meanwhile, encountered a last-minute setback with the muscle injury of David Alaba, scorer in the Camp Nou league classic, who did not even enter the call. His place was occupied by Nacho in a defense that also had the return of Dani carvajal on the right side.

Precisely, Pedri had the opportunity to turn the scoreboard with a shot from the front that came out brushing the right stick from Courtois' goal in the first interesting play of the second half. Barça had turned into a very different one from the first half, unleashing Madrid, and shortly after Dembélé did not sing the goal for a sigh.

The good news for the Catalans continued to be given with the reappearance of Ansu Fati, who had not played since he was injured on November 6, for which he will play the last 25 minutes of regulation time, in which again it would be decisive.

But first a superlative Benzema appeared. In '69, hit a shot on the stick and, in 72, he was attentive inside the area to make it 1-2 after a rejection by Ter Stegen to Carvajal's center.

And again Barcelona grew after a goal against. Ansu Fati, who has a gift in front of the goal that not even serious injuries have usurped him, returned equality with a header from Jordi Alba with seven minutes to go, enough time for Dembélé had a hand in hand with Courtois, who became great against the French and sent the semifinal to extra time.

The Barça appeared in the extra time grown up with that 2-2, feeling that for the first time in a long time he was not inferior to a first-rate rival. But that was not enough to prevent Real Madrid from getting back ahead on the scoreboard with another transition that ended 'Fede' Valverde in the 98th minute with the calm of a veteran.

Xavi Hernández's men continued without giving up and had a triple chance to beat Courtois by reaching the minute 100. Sergio Busquets, Dembélé and Pedri stayed at the gates of the long-awaited tie. Also Ansu Fati with an agonizing Chilean attempt. Rodrygo was not right either for Real Madrid, although he did not need to seal his classification to the final.

Incidents: First semifinal of the Spanish Super Cup held at the King Fahd International Stadium in Riyadh before 30,000 spectators, 50% of the capacity allowed due to restrictions due to the coronavirus pandemic.