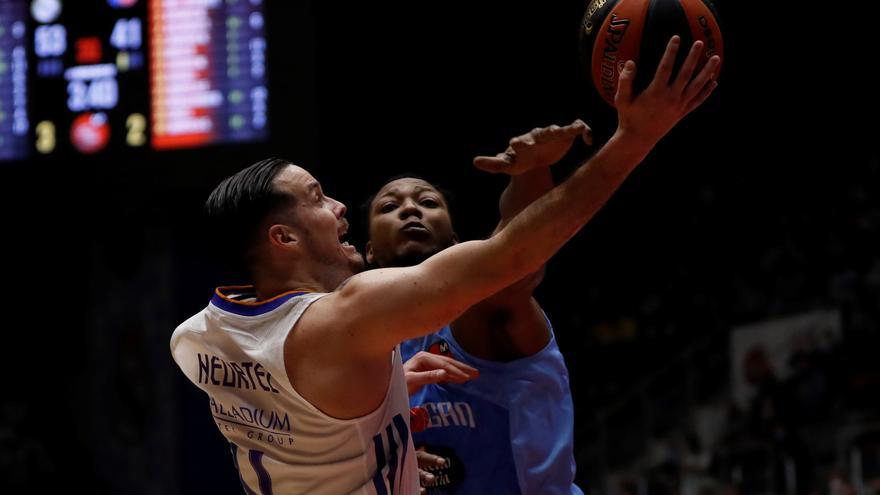 The Real Madrid fulfilled this Thursday with the planned script qualifying for the semifinals of the King of Granada Cup after winning in a tough battle, the resistance of a brave Río Breogán who fought hard, prevailed in three quarters and took him to the limit, but missed the points of his two stars, Dzanan Musa and Bell-Haynes, well defended from start to finish by a white team to which he is waiting for Lenovo Tenerife (73-67).

The French Guerschon Yabuselewith 17 points and 4/5 in triples and double digits of Walter Tavares (11 and 11 rebounds) and Thomas Heurtel (12 and 10 assists) allowed Pablo's players to overcome the resistance of one of the League's revelations, who left a great image on his return to the KO tournament.

Yabusele made his Cup debut with the first five points for his team, while Musa, another sensation in the League, opened the Galician scoreboard with a triple in his first action after getting rid of Alberto Abalde's sticky marking. From the first minute sparks flew between the two and Pablo Laso's slogan was clear: stop the Bosnian as it was.

Real Madrid dominated a willing opponent without excessive stress but who seemed to suffer from the nerves of his debut in his second cup participation and after 32 years of waiting. He accumulated errors in the shot and suffered before the potential of the leader of the League, well directed by another Frenchman, Thomas Heurtel.

🔥 @albertoabalde6How many Granada tapas have you eaten already?

You don't run out of power!

Yabusele's second triple set off the first alarms in a Breogán that was 13 down at the first change and that only had three points in six minutes, a complete recklessness against the king of Cups. The scoring rhythm of one and the other was very different and Real Madrid seemed to be going for the win from the start, with all their men contributing in attack.

Hanga took over from Abalde and stuck to Musa, who he suffered to receive balls and find comfortable shots, while in the other zone Yabusele -the great protagonist of the first act with eleven points- continued to do his thing and hit the Galician illusion with his third triple, which Sergio Llull imitated in the next play to get on the scoreboard 27-16 with which finished a first quarter of clear white color.

Mrsic doesn't want to leave the #ACB Cup and look for the reaction of his boys.

Since the perimeter was still working for him, Real Madrid maintained a great scoring rhythm. The players trained by the Croatian Veljko Mrsic did not give up and squeezed every attack to avoid greater evils, but in defense they could not contain the potential of an opponent eager to win the Cup to put behind their poor run of play and results.

After three minutes of respite, Musa returned to the track when his team trailed by ten points but, the star of the team from Lugo could not detach himself from his defenders, who stopped him based on fouls, assists and blocks and managed to despair him over and over again.

As the minutes went by, the attacks from one side to the other became bogged down, so Real Madrid's advantage remained around ten points until the break with a 41-31 that kept Breogan alive who knew how to supply Musa's little contribution through fighting.

Yabusele's success (14 points), Tavares' rebounds (7), Heurtel's assists (8) and Hanga and Abalde's defenses favored Pablo Laso's men in the first half, although Breogan, who won the second act, continued with options waiting for the awakening of its two stars, who only added eight points after twenty minutes of struggle.

🔥 In this #ACB Cup the points SWEAT like a charm.

"There is no easy basket" they would not buy it from me #NoMoreTopicsbut... how barbaric.

The exchange of blows continued after passing through changing rooms. Yabusele continued to his own and added his fourth triple and Abalde hit his second while in the other basket the Slovenian center Rahid Mahalbasic contributed points and rebounds and, after many minutes, Musa managed to free himself from his mark and hit from the goal to go down to nine the handicap.

As the minutes passed, Galician hopes evaporated. They couldn't find their way to the rim and saw how the gap widened at a worrying rate and for the first time reached fifteen points after a shot by Sergio Llull (56-41, min 18).

The Galician dream won the whole with its great start to the final chapter. Jordan Sakho left the mattress at five points as soon as the act began and Lukovic dropped him to just two from the perimeter with eight minutes to go. Real Madrid was stuck and accumulated four and a half minutes without any basket in play until William-Goss, unpublished until then, gave air to his with a triple in the last second of possession.

👏 @DzMusa take the floor and the River @CBBreogan say goodbye to this #ACB Cup in the middle of a standing ovation.

We are waiting for you back!

Due to a lack of success, the Whites pressed their defense to the limit, which kept them ahead, but the minutes kept passing and they couldn't get away, forcing Pablo Laso to stop the game to prepare the final offensive (62-60, min 36).

In the end, the experience of the Madrid team in this type of tournament allowed them to seal a victory that was more fought than expected. In the semifinals, Lenovo Tenerife awaits him on Saturday, while The Breogán River returns to Lugo with its head held high after having stood up to a rival that it pushed to the limit.

Incidents: Second knockout round of the quarterfinals of the Granada Basketball King's Cup, played at the Palacio Municipal de Deportes before 6,319 spectators, 75 percent of the permitted capacity.

Sadiku is running out of time: his contract ends today and he has not yet decided

Tejeda becomes one of the epicenters of Transgrancanaria 2023

Muguruza succumbs to the first change against Minnen

21 arrested, more than half of them soccer players, for match fixing

Moleiro opens the round of medical examinations before the preseason