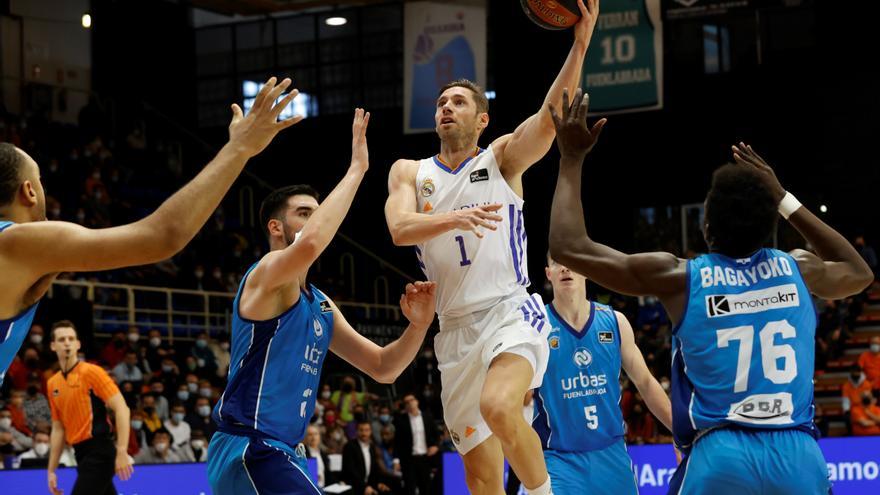 A triple in the last second from the French base Thomas heurtel saved the win for him Real Madrid (85-88) in an even final against him Urbas Fuenlabrada, which was vindicated after the bad image of the previous day competing until the end to the powerful white team.

The set of Pablo Laso he took the victory thanks to the final tino of the French base (12 points and 9 assists), although his compatriot Fabien Causeur (19 points and 6 rebounds) had supported him until then, in an even final in which he was left without Cape Verdean center Walter Tavares (10 points and 11 rebounds), sent off for a protest that cost him his second technical foul.

The fifth consecutive victory for Real Madrid among all the competitions gave him more work than expected by a vindictive Fuenlabrada after his bad image in Murcia (99-76), which had caused a sanctioning file to all the players, aggravated in the case of the American escort Sean Armand, who became entangled on Twitter with a fan. As a consequence, neither Armand nor Álex López played, due to a technical decision supported by the entity.

The @RMBbasketball wins the Urbas court @BFuenlabrada with this white base TRIPLE.

The Fuenlabreños gave, this time, the image that their audience demanded: they recovered from a bad start, they matched the powerful white team under the hoops (33-33 in rebounds) and had the inspiration of the Nigerian guard Obi Emegano (27 points ) and the Serbian center Dusan Rstic (25 points, 5 of 6 in triples) to put the duel in a fist until the last possession.

However, that equality was slow to come due to a dominating start from Madrid, driven by the energy of Guerschon Yabusele and with two triples in a row from Causeur. Kyle Alexander dared to block Tavares, but he was the only one trying to stop a downpour that capped another triple by Yabusele (5-16, min. 4).

The whites liked each other with remote-controlled passes from Heurtel for the races of Alberto Abalde and Causeur, until Ristic appeared. The Serbian pivot surprised Laso’s men with his versatility in attack, both in the triple and in the blocking and continuation (10 points in 4 minutes), until a slap from Tavares sent him to the locker room with a cut in the eyebrow for a first partial of 20-34.

Urbas stirred taking advantage of a more tender Real with the young Juan Núñez at the controls -17 years, one less than the Argentine interior Juan Fernández who debuted with Fuenlabrada-, and began to smooth the disadvantage, through a refined Jovan Novak and the return of Ristic, which was to jump onto the floor and hit a triple (31-36).

That improvement in defense and rebounding (9-5 in the second quarter) made ‘Fuenla’ believe, that he managed to run for the first time in the game, with an ‘alley-oop’ by Christian Eyenga and triples by Emegano and Ristic to turn the duel (43-41, min. 16). Laso stopped the game and put Yabusele, Heurtel and Abalde back, although the Frenchman’s triples did not stop the locals, hopeful with the 49-47 at halftime.

😱 The party of @obiemegano he was being SCANDAL and … He just DRAWN it 18 seconds from the end with this TRIPLE!

Fuenlabrada followed with the same intensity after the intermission, which began to unhinge some white players, while those in blue not only denied shots, but also rebounded and hit three (65-57, min. 28) to go to the last quarter with the initiative on the scoreboard (69-64).

The difference between a meritorious team and a winning one is demonstrated in the last quarters, and Madrid took less than two minutes to demolish the disadvantage (69-70), although a lack of Tavares on Emegano and the subsequent protests of the Cape Verdean pivot ended with the white ’22’ in the locker room.

Even so, Real Madrid remained firm in defense and two triples by Sergio Llull kept him ahead, an effort that Vincent Poirier continued on the inside, while ‘Fuenla’ was still stuck and only worked thanks to Obi Emegano, who insisted until the point of equaling the duel 85-85 with a triple with 18.4 seconds to go.

The last possession was white, Llull looked inside and ended up giving the ball back for Heurtel to play the decisive triple in the last second. The Frenchman was right and signed the Madrid victory, before a Fuenlabreña who regained pride in his team, he let him know despite the defeat. Triumph that feeds the whites before the Euroleague double-round week.

Incidents: match of the tenth day of the Endesa League, played at the Fernando Martín de Fuenlabrada Pavilion (Madrid) before 4,600 spectators. Before the start of the meeting, both teams posed with a banner against gender violence, promoted by the Fuenlabrada City Council.