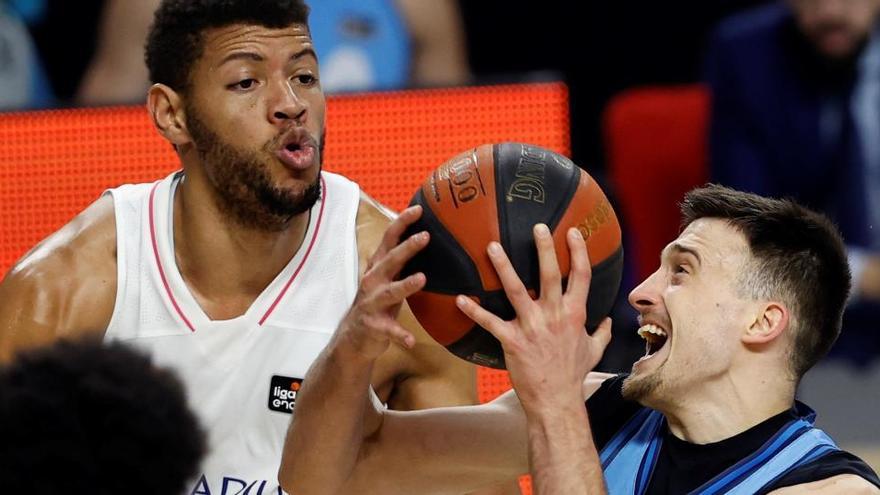 The Real Madrid sweated more than expected to carry out the derby of the Capital against a brave Movistar Estudiantes that, although he stood up to him until the last quarter, he could not stop the exterior success of his rival or the dominance in the painting of Walter Tavares, who one more day was fundamental in the last white league win before the Copa del Rey (65-79).

With twelve 3s made from 25 attempts (48 percent) and Jaycee Carroll and Fabien Causeur as leading stilettos, the leader survived the bravery of a rival who was in the game for many minutes but will have to keep rowing to get out of the dangerous zone of the table after conceding his ninth loss in his last ten performances.

The two teams jumped onto the track equally plugged, with success from all positions. The Estudiantes played the leader from you to you, although his courage lasted only five minutes because Carroll started to have his day and wrote down everything he threw, well supported by Carlos Alocén, and with four triples without failure the whites began their escape.

From 11-13 it went five minutes later to 12-22 with which ended a first quarter of clear visitor color thanks to the success of the American guard, who contributed ten points in that period the day he reappeared after his ankle injury. In addition, Walter Tavares once again imposed his law on painting and prevented any approach to the Madrid rim.

The second act was one of complete collegial dominance. The JJ Barea-Ángel Delgado connection began to bear fruit and the shock tightened again. With Tavares already on the bench, the Dominican pivot was the one who dominated under hoops, and Aleksa Avramovic joined the party, putting his team down three.

The leader accused the rotations and stayed ahead thanks to his success from the perimeter, because in the zone he was losing the battle for the rebound (21-16 at halftime) and his two-point percentages began to drop dangerously.

A triple by American John Roberson tied the derby many minutes later and in the next play Víctor Arteaga finished the comeback, returning command to Javier Zamora’s men, who in a good second quarter were able to cancel the twelve points of disadvantage and they went to the changing rooms with a more optimistic vision (35-35, min 20).

Pablo Laso returned to the track his two best men at the start, Tavares and Carroll, to return the waters to their course and although the Cape Verdean quickly got on with three fouls, the Vitorian coach kept him on track. To add insult to injury Jeffery Taylor and Usman Garuba had to retire injured, adding to the long list of headdresses for the Copa del Rey.

The derby remained even for many minutes. Real Madrid missed a refreshment in the management, with Carlos Alocén too alone after the losses of Sergio Llull and Nico Laprovittola, and it did not fuel at its usual level, although he knew how to get ahead to the last act thanks to the good hand of Carroll, his most inspired player (51-54, min 30).

With three stratospheric plugs, Tavares sealed the white ring again at the decisive moment and allowed a new stretch on the scoreboard, with an eight-point lead that gave air to a physically punished Real Madrid but in which Causeur saw the ring very easily, like his teammate Alberto Abalde (58-66, min 34).

Pablo Laso’s players went to more in all facets of the game, which was in contrast to a Estudiantes who was losing steam and seemed to accuse his inactivity after more than a month without playing until last Wednesday. After many minutes of suspense, the leader added his twentieth league win and he is already thinking about the Copa del Rey, in which from Thursday he will begin to defend his crown.

Incidents: Match of day 23 of the Endesa League played at the WiZink Center pavilion in Madrid behind closed doors due to the coronavirus pandemic.