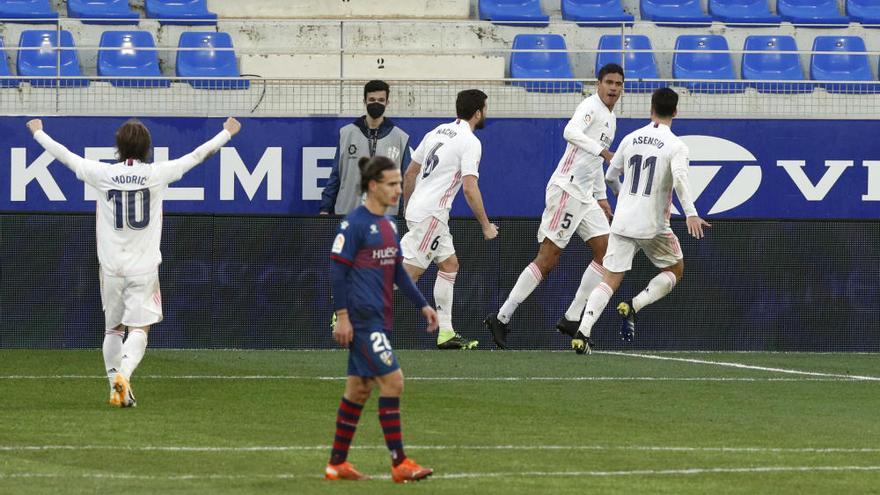 Real Madrid shot with pride to win 1-2 at Huesca and Raphael Varane, author of two goals, avoided a new shipwreck of the white team and gave air to his compatriot Zinedine Zidane.

The Madrid team was obliged to take the victory from El Alcoraz to maintain the minimal options he still has to fight for the league title and he achieved his seventh victory away from home, although suffering a lot, against Huesca that ran into the superiority of its rival in the second half and also had opportunities to increase its account.

Real Madrid, after the fiasco against Levante, went warned to Huesca, where, after a balanced first half, he gave no room for surprise to the team of José Rojo ‘Pacheta’ who, with the defeat, runs the risk of seeing his distance with the salvation zone increase if his closest rivals manage to score this day.

Last week’s victory in the Valladolid field had raised the morale of the Aragonese to the point of thinking that they could be surprised at the irregular moment of the Madrid team, but they ran into the harsh reality of their opponent’s potential And, although the white team had stumbled this campaign with several of the teams that are fighting for permanence, this time it was insurmountable in the second half for Huesca.

The Huesca team came out with high pressure that caused visitors losses that meant that in the first four minutes they had finished up to three times on the Madrid goal. Real Madrid was little by little avoiding errors in the exit of the ball to become owner of the ball, which made Huesca take shelter at the edge of his area with the lines very close together.

Zidane’s team tried to open the local wall by overturning the game on the left side, where Vinicius was the most active man. His was one of the two scoring chances for Real Madrid in the first 45 minutes. It was in the 25th, after a good individual action and with a Vaseline that came out narrowly. The other was played by a Karim Benzema abducted by the Huesca defense and who did not appear until minute 34 with a shot with a thread that was saved by goal Alvaro Fernández.

The story of the beginning of the game was repeated after the break with a plethora of Barça team that sent a ball to the crossbar with a shot from Mikel Rico, achieved the 1-0 with a goal from Javi Galán two minutes later and had a third chance at 50 with another shot, by Rafa Mir, to the crossbar.

They were the best minutes from Huesca, but shortly after, in the 55th, and after a free-kick from Benzema that hit the crossbar, Raphael Varane imposed his greater stature on a ball that plummeted to equalize the score. Aware that the draw did not serve them, Huesca and Real Madrid sought the rival goal with more conviction. The game became an accumulation of chances for both of them, but especially for the Whites.

However, sometimes the lack of finishing efficiency and other times the local goal forced Zidane’s team to suffer.

The 1-2 savior for Real Madrid was also marked by Varane, after taking a free kick in the 84th minute and taking advantage of a rebound by the local goalkeeper after a header from Casemiro.