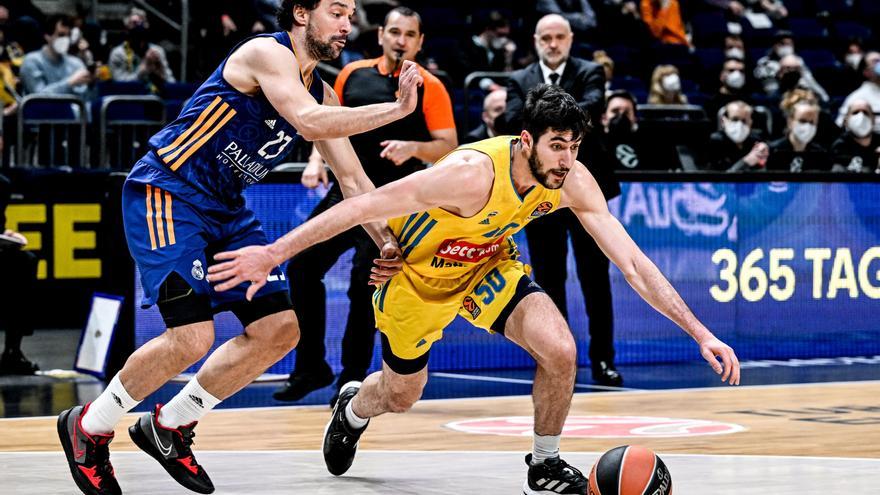 A Coral Real Madrid put the win in Berlin on track against Alba (74-89) with a French flavour, that of the interior solidity of Vincent Poirier (13 points, 5 rebounds) and the genius of Thomas Heurtel (17 points, 7 assists) in the return game of the Argentine Gabriel Deck, who played 9 minutes and scored a basket, after returning to the Spanish club after a bitter year in the NBA.

With his usual solidity, disabling the leathery Maodo Lo, the German star who finished with 21 points, 5 rebounds and 2 assists, the Madrid team managed a distance of more than ten from the second quarter and were able to overcome the yellow reaction at the end of the third period, with which they became the leader of the Euroleague standings with 16 wins and 3 losses, the same as Barcelona but with two fewer games played.

In the duel of his 'redebut', Deck played the finals of the first and fourth quarters, as part of the process of his reinstatement. to a team that knows him perfectly and where he will be able to show the talent that was not convincing in Oklahoma (United States), and Real Madrid resolved without Rudy Fernández and Edy Tavares, both isolated by covid-19, and was able to rest Nigel Williams-Goss and Fabien Causeur, who stayed in Spain.

those of Paul Lasso They were clear that they had to prevent the dynamic Alba Berlin of Spanish coach Israel González from picking up pace, and for that they had to defend. The white team got it, sealing their hoop and going 0-6 in the first three minutes, thanks to a long shot from Poirier.

Alba had to entrust themselves to their figure, Maodo Lo, to initiate a brilliant response, with five points from the German international, finding holes in the defense to find trays and leaving Guerschon Yabusele on the floor to score a triple. Another hit from 6.75 meters from outside Alba Marcus Erikkson allowed 8-8 in just over a minute (min. 4).

What followed was a more balanced version, back and forth, with white dominance and responses from soloist Lo. 34.5 seconds from the end of the first quarter, closed in a white 15-19, Deck's first reunion with Real Madrid took place. The 'Tortu' stayed on the floor after the break, but Sergio Llull was the one who blew the white bugle, with a basket and unleashing a rain of triples to which Trey Thompkins, Heurtel and even Yabusele were added to overcome the ten in the halfway point of second part (24-35, min. 15).

The distance allowed the Whites to resist moments of offensive drought and new streaks of success by Lo, with answers from Alberto Abalde, Adam Hanga and again Poirier to go to the dressing room with a comfortable 36-48 in the electronic.

A less fluid Madrid in attack and attentive in defense came out of the locker room, and Alba took advantage of that to run and recover ground with a choral version, not so 'Lodependent', which earned him a 10-2 start and get to four points (46-50, min. 24). Yabusele, until then surpassed by the speed of the yellow defense, and again Poirier, stopped the Teutonic advance.

Seeing the rival scoring frenzy stopped, and buoyed by Abalde's energy and Heurtel's direction, Madrid began not only to respond in attack, but to seal the defense with an immense Poirier, to take off almost definitively with a 0-10 run (from 54-61 to 54-71 in two minutes) to face the last quarter with 17 lead points: 56-73.

And there wasn't much of a game, because the balls to the giant Christ Koumadje (2.24 meters from the immense Chadian pivot) did not seem like enough tool to break a Real Madrid lead that Thompkins and Heurtel raised to twenty (60-81, min. 34) .

With the last five minutes for Deck on the floor, a hoop basket passed in his 'redebut' and 74-89 in the electronic one, the white team settled the night in Berlin, with the satisfaction of having fulfilled their duty three days before meeting Barça again on Sunday in Madrid, ten games and ten victories after the defeat against the eternal rival in the duel of Euroleague December.

Incidents: game of the twenty-second day of the regular phase of the Euroleague, played at the Mercedes-Benz Arena in Berlin (Germany), before 1,600 spectators.