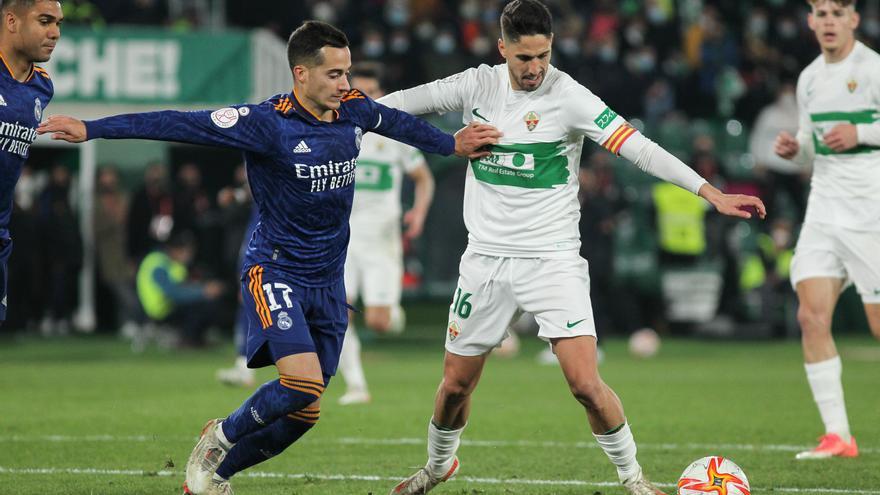 The Real Madrid will play against him again elche this Sunday (4:15 p.m.) just three days after seeing their faces in the Copa del Rey, with victory 'in extremis' of the meringues in extra time, and with very different objectives in a match corresponding to day 22 in the LaLiga Santander.

The Santiago Bernabéu will host a duel again 13 days later. At that time, theirs were proclaimed super champions of Spain in Saudi Arabia -with Clásico including the buchaca- and they also got the ticket for the Cup quarterfinals after eliminating, precisely, Elche, their rival this Sunday in the return home.

Ancelotti's men continue to grow as the season progresses, they maintain a leadership four points over Sevilla and are alive in all competitions. A situation that seems unbeatable, especially if comparisons arise with the eternal rival or the neighbor of the Metropolitan. A season where everything is possible in Chamartín.

The Italian coach hugs the counter and possession "depending on the circumstances of the match and the rival" and has achieved a solid block that -moreover- seems to accommodate new guests as seen in the Martínez Valero. Isco, Ceballos and Hazard were the best example. The three were substitutions that had their relevance in the comeback.

Ancelotti, who has dropped that the Belgian will start, also recovers Dani Carvajal for this game, separated by COVID the last two commitments, and Courtois, who returns to goal after leaving his place to Lunin in the Cup. Another of those who also returns is Karim Benzema, while Marco Asensio, Vallejo and Mariano, the three injured, will be the Madrid players.

In this way, the eleven of 'Carletto' should be the same as always with the possible presence of Hazard in the offensive trident and with the question of whether Carvajal will occupy the right side or Lucas Vázquez will be its owner. The versatile Galician player was more than notable last Thursday in Elche, as was Marcelo, whose recent suspension only affects the Copa del Rey and not the league championship.

For its part, Elche visits the capital of Spain in fifteenth position, with a cushion of four points above the relegation places, and with the illusion of causing a surprise in a stadium where never in its history -after 22 games- was able to achieve victory. They have a record of 19 defeats and 3 draws, the last one in the 1975/76 season.

The people from Alicante, who recover Piatti, will continue to be without the injured Pedro Bigas and Iván Marcone, who are joined by Guido Carrillo, and maintain a long list of players in doubt after having tested positive in COVID-19 in recent dates. This is the case of Kiko Casilla, Enzo Roco, Barragán, Pastore and Omar Mascarell, in addition to their coach, Francisco, who was unable to sit on the bench in the last Cup match.

However, his recent good results give him some peace of mind before tackling this venture. Elche, who had the Whites on the ropes last Thursday, knows which way to hurt Real Madrid. those of Francisco They have two consecutive victories in the League and have accumulated three games without losing, a good letter of introduction for their duel at the Bernabéu.