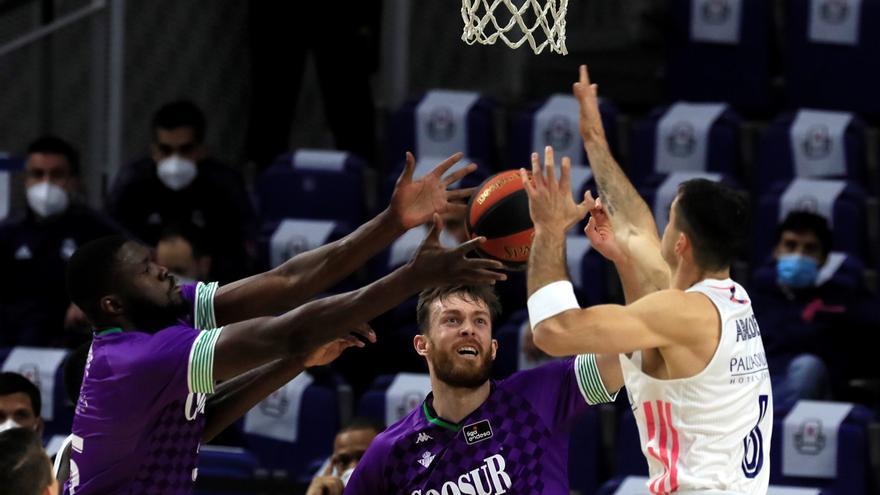 Real Madrid pulled ex officio to overcome the initial resistance of a Coosur Real Betis who, although he stood up to him for a few minutes, ended up succumbing to the greatest wardrobe of a leader who stands firm and this Sunday it went from less to more until, in the third quarter, Argentine Nico Laprovittola broke in to break the clash definitely (95-77).

The white team dominated the scoreboard from start to finish thanks to good performances from Gabriel Deck and TreyThompkins and the usual intimidation of Walter Tavares. The Cape Verdean pivot once again imposed his law under hoops and contributed to adding the twenty-fourth league victory for the team coached by Pablo Laso.

Hand in hand with his two interiors, Real Madrid, took command from the beginning. Usman Garuba contributed points and Tavares dominated in the paint. Coosur Betis responded as best they could, with some isolated actions that kept them in the game although they were missing a clear reference in attack.

As the minutes passed, the Andalusians were adjusting their defense, although in return they suffered with the better aim of his rival from the perimeter. The four Madrid triples in the first act, in front of a single success from the Sevillians, decided in favor of the locals the score at the end of the first ten minutes more even than expected (18-14, min 10)

In the resumption, the triples continued to hurt Joan Plaza’s men. Three consecutive scored by Jaycee Carroll, Trey Thompkins and Fabien Causeur threatened to open the first gap of the afternoon, although the green-and-white team was resisting as best they could and Billy Ouattara, from the corner, returned the calm by raising the score 32-28.

Real Madrid continued their business, looking for gaps in the Betic defense. Tavares, with a mate, managed to raise his income for the first time above ten points two and a half minutes before the break. Betis, who dominated the rebound in the first half thanks to Youssou Ndoye, suffered to score in each attack, until the American TJ Campbell appeared in the game, who avoided greater damage with a pair of consecutive triples that allowed his team to reach the break alive (46-38, min 20).

Betis, who had their best men in Randle and Ndoye, with 16 points each, threatened to come back thanks to their best start after passing through the changing rooms and got four down by taking advantage of several errors in attack by their opponent that he was not comfortable in attack, stopped by defense in the green-and-white zone, and was only able to add four points in five minutes.

Deck avoided surprises and kept the leader ahead with his success, while Tavares continued to dominate under hoops, blocking and intimidating those who approached his domain. Madrid controlled the game but did not finish breaking the game, until Laprovittola emerged in a big way and revolutionized the clash.

The Argentine point guard linked three consecutive triples – the third with an additional shot included – and his thirteen points in a spectacular fourth quarter finish put the leader’s triumph on track with the last ten minutes remaining (70-51, min 30).

The exchange of blows in the decisive section benefited the leader, who maintained a comfortable mattress of twenty points and was able to distribute minutes among his men before the marathon of matches ahead. The last act had hardly any history, and only served to certify the dominance of a Real Madrid that remains at the top of the table, with a single stumble after 25 games.

Incidents: Match corresponding to the 27th day of the Endesa League held behind closed doors at the WiZink Center in Madrid.