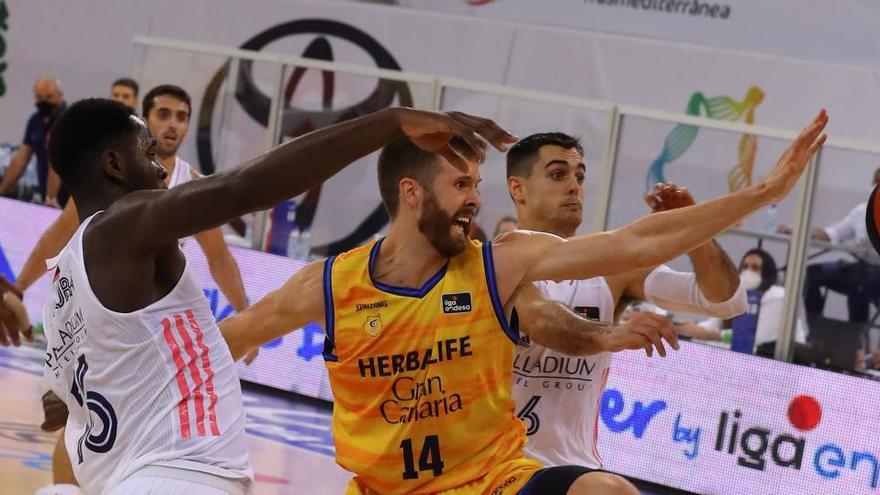 He Real Madrid recovers from defeats in continental competition passing the roller one more week in the Endesa League, this time before a Herbalife Gran Canaria (65-90) in reverse situation, undefeated in Europe, but already stuck in the red zone with a worrying 1-3 balance.

The ex-yellow Eddy Tavares, with 15 points and 5 rebounds, and the Argentine Facundo Campazzo, with 11 points and 8 assists, stood out against a Canarian team that could barely sweeten the defeat with the points of Okoye (12) and the inside game of Costello (another 11 and 5 rebounds).

In a erratic onset by both teams, Herbalife took advantage thanks to an exultant Frankie Ferrari who jumped from the starter wasting all his gasoline from the perimeter (10-7, min. 6).

However, the white team dissipated any hint of relaxation, with Abalde and Laprovittola as protagonists although the defensive balance of the islanders was a balm for the Fisac ​​slate, which began to rush the second unit in a first quarter of low figures (12-11).

However, a time out of Pablo Laso, combined with a series of cutting edge settings, caused a short circuit in the island game, Madrid taking the initiative with a 7-0 partial (12-18).

Already in the second quarter, the Claretians charged back with a Ferrari dusting off their offensive inventory, while Dimsa reduced Carroll’s gunpowder on the outside line, balancing the scales at 3:40 by the break (28-28).

From there, the wrists began to carbure in both teams. Costello and Albicy were encouraged to the recital, while Llull savored this improvised contest with two almost consecutive triples. From 31-28 he went to an eloquent 34-42 in just two minutes.

He 36% on field goals It was taking its toll on the local squad, and to make matters worse, the 0-14 set allowed Real Madrid to take ground in the resumption (36-50). Tavares was a torment in painting, while Campazzo distilled his best repertoire as a conductor -8 almost consecutive points-.

The spills reached 19 points. Gran Canaria could barely make up the bleeding before a pluperfect Madrid, which even with rotations allowed itself the luxury of maintaining income (45-64).

Already in the last period, Herbalife was still on the verge of coma (47-72 with 8 minutes to go), with the Thompkins and Deck show deactivating any hint of optimism among the island squad. Fisac ​​tried to speed up rotations so that the team would not break down at the white escabechinaBut all effort seemed sterile.

For its part, Madrid continued increasing figures through Llull and Laprovittola, while the youth squad Tristan Tsalikis-Vouktsevits – of Swedish, Serbian and Italian nationality – enjoyed his first minutes (3) and points (2) in the ACB, in a purely white clash.

Incidents: Meeting corresponding to the fourth day of the Endesa League, postponed after detecting a positive case for Covid-19 in the yellow squad. No spectators.

Barça seeks to dispel doubts in its European debut against Ferencváros