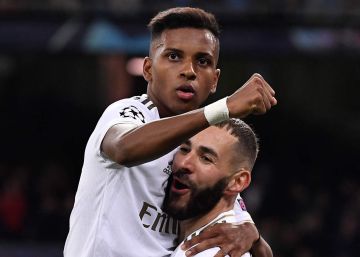 Rodrygo Goes presents a child's gesture that fully corresponds to his physiognomy (174 centimeters and 64 kilos, about six below the muscular ruler that determines the ideal relationship between weight and height) and, nevertheless, his way of playing imitates the of veteran players. From the right wing, this 18-year-old Brazilian does not give away unnecessary races or dribbles, and it seems that under his shirt he had a detailed report of the conditions of his marker. Before the Galatasaray, Maybe he knew that the Nagatomo side has a tendency to join the center (Marcao), neglecting his back. Seen the hole, the Brazilian huddled a center to the area of ​​Marcelo, cut Lemina and with the left leg exceeded the stretch of Muslera. Then he blinked.

His third goal of the season, the first in Europe, came with the first shot on goal, as it happened in his premiere scorer in LaLiga against Osasuna. The second goal brought together the same protagonists, with the only difference that on this occasion the center of Marcelo was with the right leg and the shot of Rodrygo with the head, well placed between the two Turkish centrals. Hazard, who had watched the scene twice, approached him after the second and snapped at something that caused their laughter. Perhaps the Belgian suggested a bit of solidarity, because of what the good distributed best knows. Rodrygo's was the earliest double in the history of the Champions League: six minutes and 13 seconds.

Rodrygo's select mobility mixed well with Carvajal climbs and Valverde's aid, generating a triangle through which the Galatasaray fell directly into the sink. The apparent good plant of the Turkish team is nothing more than a costume with loose seams. Not even the injury of Marcelo, who retired on the verge of rest with what, in the absence of a medical part, refers to the third muscular problem suffered by the Brazilian throughout the season, and that occurred in his 100th match in Europe With the white shirt, it generated some lack of control in Madrid.

In fact, Galatasaray's defensive unconsciousness represented in the figure of Nagatomo caused a new Rodrygo pilgrimage. The carioca hunted a lousy pass behind the Japanese and then gave the ball down to Benzema. With his two goals, the Frenchman has 62 goals in the Champions League (50 with Madrid beating Di Stefano), which places him as the fourth highest gunner in the competition.

Evaporated the Galatasaray to the rest, the party acquired a sufficiently festive tone so that Zidane decided to replace Casemiro (the second time in 15 games) and gave entry to Isco, unpublished in the last match against Betis. The readings between the lines of the changes are read in a particular language. Despite taking three goals and delivering an assist, Rodrygo played the game in full. Zidane changed a standing ovation for a complete task. There is no greater message of confidence for a kid than to give him the opportunity to enjoy the party until the last minute. And on the last breath he marked the third. There came the tribute. The perfect triplet: one goal with the left leg, one with the head, and another with the right. The triplet emulates Raúl against Ferencváros in a 6-1 Champions League of the 1995-1996 season. The 7 marked two with the left and one head, being 18 years and 113 days the youngest in history to mark three goals in the Champions League. Rodrygo got it with 18 years and 301 days.