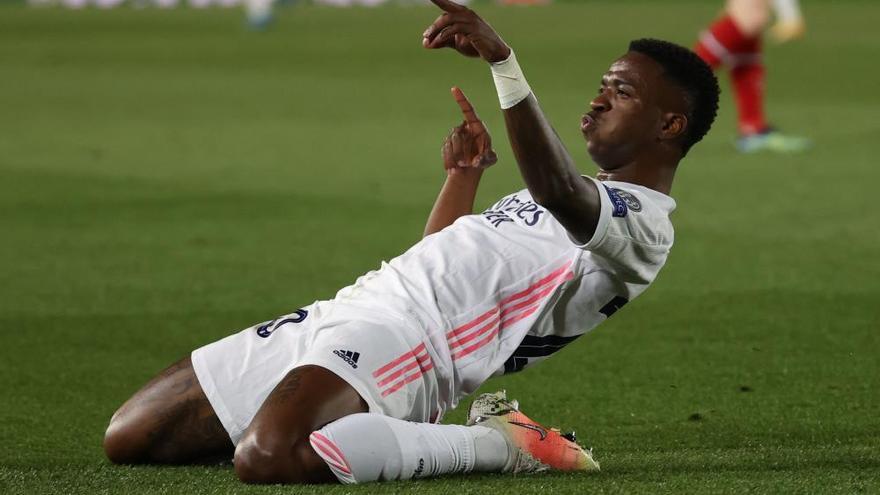 Vinicius he had his best game in store for a big day. His dream night buried fears in the definition and relaunched his impudence, based on speed to hit hard at the Liverpool in the Alfredo di Stéfano, with a double from the Brazilian and a goal of Marco Asensio that give a good advantage to return to the semifinals after passing through Anfield.

The competitive gene of Real Madrid it never goes away. He is oblivious to the circumstances that mark a high-flying European duel. At the moment of truth, that squad that got tired of hearing that they had not had a goal since the goodbye of Cristiano Ronaldo and that does not give him to get far in the ‘Champions‘since that golden final in Kiev against Liverpool itself he got his best game of the season out of his hat at a decisive moment.

Pandemic football doesn’t just leave empty stadiums that dwarf the show. He hit Real Madrid hours before the big date with the positive of Varane. It could affect the idea of ​​playing with three Zidane centers, but not the winning mentality exhibited by his players. The king of Europe came out to play with the same weapons as a Liverpool that intimidates with its trident but that was made small before the intensity of Madrid.

A choral match, united in the effort, launched in a morale that skyrocketed as Madrid found its best football. With rhythm and precision. He made Liverpool long with deep passes from Kroos, nullifying his intention to press up. With Vinicius and Marco Asensio plugged into a trident that has plenty of class appearances from Benzema for any offensive corner. As soon as he started, he warned Alisson of his intentions.

That shot at two minutes was a direct message. The significant casualties would not affect Real Madrid at all if all their players pushed with the same idea. With Casemiro exhibiting intelligence in the coverage, Lucas Vázquez marking the ground for Sané since the first ball arrived and Salah without being able to show his danger by not having meters to run. Real Madrid found insecurity in its rival due to its defensive losses and a flank to attack. Alexander-Arnold was a custard and Vinicius drove him crazy.

It was the day of the Brazilian. The moment to transfer to the biggest stage its moment of growth. He invented perfect running control before looking for Modric, downed on the edge of the box. Mendy struck in the same area and Vini headed across. At the third he was lethal correcting that nervousness that he feels in the definition. Kroos’s millimeter pass to break the English defense and the Brazilian’s breakthrough break. Control with the chest and hand to hand surpassed with an ease until now nonexistent.

The goal left Liverpool touched and Real Madrid felt it. Benzema called for a penalty and gave Vinicius a perfect ball that he kicked across a post. Each move by Karim generated defensive problems for Klopp’s team, who was desperate. AND Asensio appeared to extend his scoring streak to four consecutive games. With the confidence to fight for any ball and find Arnold’s bad clearance to sting the ball at the goalkeeper’s exit and score the second at will.

He even had the third in a moment of unexpected collapse of Liverpool, which was rediscovered with its worst image of the premier. Klopp didn’t wait until halftime to try to change the script. He put Thiago on the field for Keita. “What are we doing with the ball? We want it,” the Spanish midfielder shouted in English, exercising leadership and inviting us to turn the game around.

He succeeded at times as soon as the second act began. It was the quick punishment after a few minutes in which Zidane’s team recoiled and delivered the ball. The leaked pass to Salah found his hit on the edge of offside. Lucas enabled it. The first shot on goal was a goal. And Mendy saved the second when the quality of Jota appeared between the lines. Everything won was thrown to the ground by the white team.

And Real Madrid realized to recover the ball and be more lethal than ever. Vinicius had the ‘fault’ of that mutation. Everything happened for him. Radiant with confidence, always facing rivals, unbalancing with speed. He punished the spaces and signed a very important goal for Anfield. Asensio had earlier forgiven one against three against three for thinking too much how to finish it.

Vinicius did not do it when he finished first, appearing by surprise in the area where a scorer lives, turning an inside pass from Modric into gold. His shot between the legs of a rival and adjusted to the post returned Liverpool to the canvas, who was still able to receive a fourth goal in full display from the young Brazilian pearl and with a low shot from Benzema before a game finale with Real Madrid defending their advantage, almost without strength but with a lot of heart.