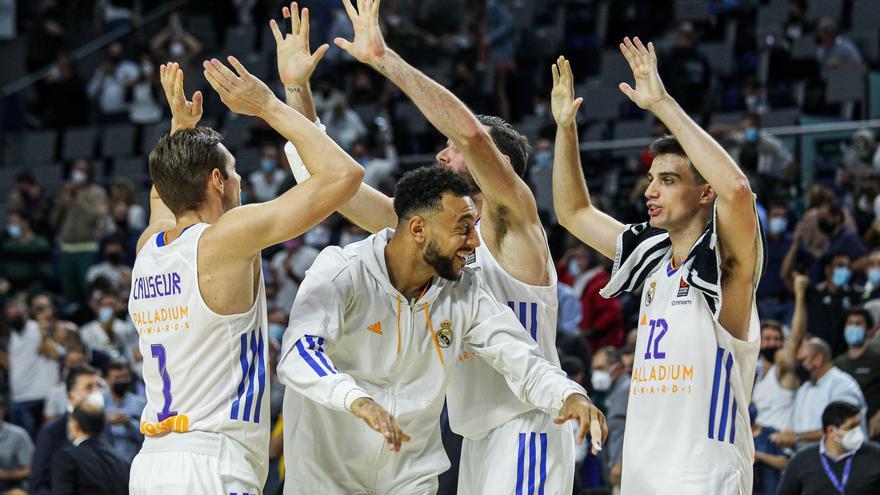 The start of the premises surprised Madrid. Baxi Manresa started 13-6 before Pablo Laso's first time-out (min 5). The Catalans generated very easy baskets through the 'pick and roll' and the game on the counterattack. An unsportsmanlike act by forward Thomasson threw the locals out of focus and the Madrid team tied the game with a 0-7 run. Baxi Manresa kept the minimum lead at the end of the first quarter, but Madrid managed to slow down the pace of the match.

Real Madrid turned the sign of the duel in the second quarter thanks to the success from the triple (6/12). Baxi Manresa dropped percentages and still managed to follow in the wake of their rival despite the whites' 9-19 in seven minutes (28-35, min 17). In the final stretch, the visitors continued to command the game from the triple, but found a worthy rival in center Luke Maye who scored 8 points in a row to keep his team very close on the scoreboard.

In the third quarter both teams they uncovered the jar of essences and attacked. Each positive action of the rival was answered by the other and the game took a lot of rhythm (60-58 min 28). The dynamics in the third quarter remained until the end and the two teams saved it for the last quarter with the score tied at 68.

In the last quarter the pulse was maintained between the two teams. The Manresa managed a five-point advantage after the first five minutes, chaining two good actions in attack and defense (80-75 min 35). But Madrid came back led by Sergi Llull and Rudy Fernández. Pablo Laso's team was placed with more than three with 30 seconds left (87-90). Baxi Manresa's point guard, Dani Pérez, could tie but missed the triple and Tavares sentenced from the free kick.

Incidents: match corresponding to matchday 17 of the Champions League played in the Nou Congost pavilion before 4,000 spectators.