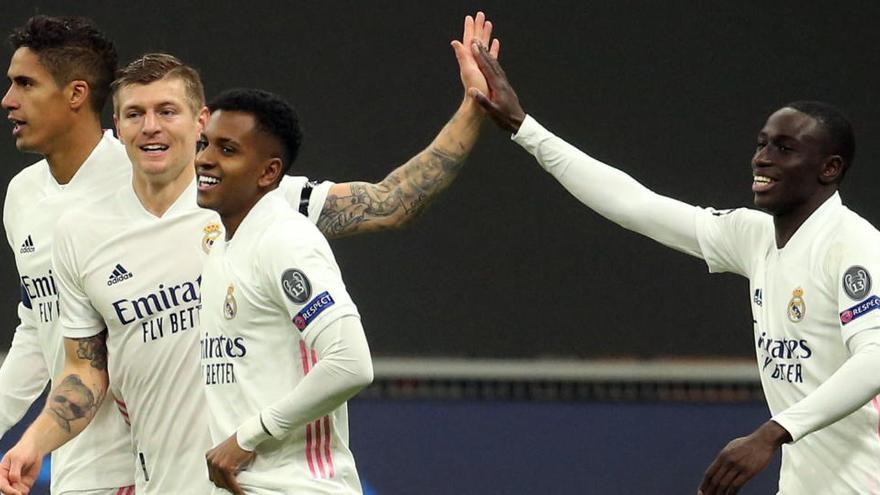 The Real Madrid wants to use the moral that gave him victory against Inter to get back on the path of victory in LaLiga Santander this Saturday (9:00 p.m. CET) in front of a Alaves what comes after four consecutive games without knowing defeat -one victory and three draws-, although it remains at the bottom of the standings.

The white team arrives with the morale up after the important victory at home of Inter Milan (0-2), which leaves the classification for the second round of the ‘Champions’ in their hand, and they want convey that image of “team” in which the French insists Zinedine Zidane to a domestic championship in which they add two consecutive games without knowing victory: a defeat, against Valencia (4-1), and a tie, against Villarreal (1-1).

Two results that have separated him from the leader, although with one game less, the Real society -23 points- and Atlético de Madrid, who with eight games, for Madrid’s nine, has 20 points in his locker, three more than the white team. With a lot of the League ahead, regaining regularity is key.

For this reason it happens to be strong again and the victory against Inter is the way to go. First clean sheet for a Thibaut Courtois to whom it is distanced to repeat the Zamora trophy to the goalkeeper less thrashed -ten goals for the two received by Oblak-

Precisely in the defensive section is where Zidane has received another bad news this Friday since Dani Carvajal suffers “a muscle injury in the short right adductor “that could leave him off the pitch for between two and three weeks. An estimated time that with the load of matches translates to between four and five absent.

Also, the captain Sergio Ramos still injured in the hamstring, although the Varane-Nacho duo arrives with high spirits after their great match against Romelu Lukaku. The medical part is completed by Álvaro Odriozola and Fede Valverde, due to injury, and Luka Jovic, who remains isolated after testing positive for coronavirus.

The good news for Madrid, in addition to the recent victory, is the growth of Belgian Eden Hazard, who assured that with minutes and perseverance, after a first season full of injury and in this one having passed the coronavirus, he will regain the level with which he dazzled Europe.

To measure your good time, They will face an Alavés who arrives in a good dynamic to this day after four games without losing and with two important draws against Barcelona and Valencia, which make him optimistic to face the white team.

The people from Vitoria add a victory and three draws to escape from the bottom of the table and will seek to surprise, as they did 20 years ago at the Santiago Bernabéu with a goal from Jorge Azkoitia that was the only victory for the Glorioso as a visitor against the whites.

Pablo Machín maintains the casualties by injury to Pere Pons and Jorge Franco ‘Burgui’, isolated by coronavirus, who was joined by Manu García last Monday, who will not be able to travel with the Albiazul expedition either.

This leaves the core very touched, short of troops, with only three players from the first team who will be able to develop their game in that area: Argentine Rodrigo Battaglia, Tomás Pina and Jota Peleteiro, so it is likely that some player from the subsidiary team will join the call to have alternatives in that position.

The babazorro coach recovers Édgar Méndez after serving the penalty match last day and aims to be one of those who will start. What is not clear is whether Machín will bet on a 3-5-2 or a 4-4-2 to try to surprise Real Madrid.

Despite the drawing, the eleven albiazul will hardly change. It will have Fernando Pacheco in the goal that returns to the house where it was formed; and in defensive tasks will participate Ximo Navarro, one of the best in the past day; Víctor Laguardia, Florian Lejeune and Rubén Duarte.

In attack positions Lucas Pérez and Joselu Mato will repeat, while Tomás Pina and Rodrigo Battaglia will participate in the center of the field, as well as Édgar Méndez and Jota Peleteiro, who will play it inside or outside, depending on the tactical scheme of the Vitoria players.

The key: May Madrid regain defensive strength and concentration for 90 minutes. The great moment of Fernando Pacheco and the biggest Albiazul hit in recent days.

The data: Madrid add two games in a row without winning in LaLigaSantander. Alavés have only won once visiting Real Madrid, 20 years ago (0-1).

Zidane: “If we do things together and with concentration we are very difficult to win.”

Machín: “We have to find our moment in the game.”

The environment: Zidane adds another casualty to the infirmary with Carvajal’s injury. Manu García and Burgui remain isolated by coronavirus.