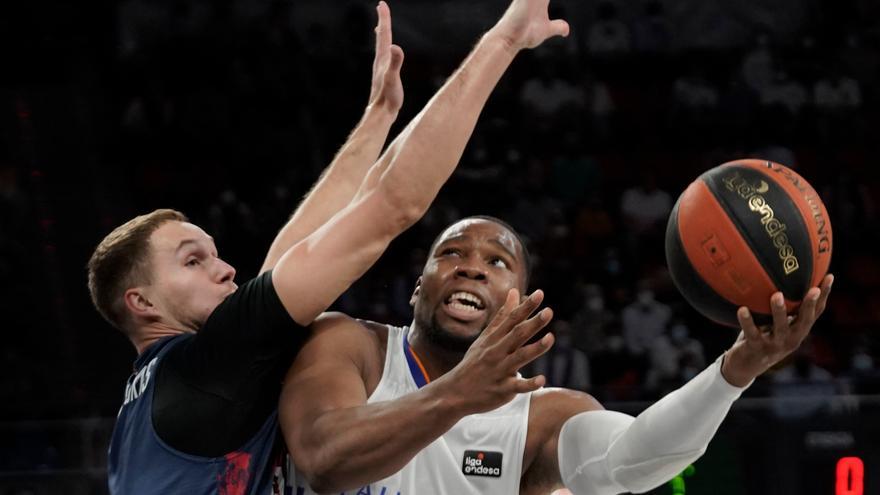 The Real Madrid scored an important victory in Munich against the Bayern, 76-80, holding on to Guerschon Yabusele when in the final three minutes both Walter Tavares and Vincent Poirier were eliminated by five personnel.

Madrid went out for all from the beginning and the presence of Alberto Abalde and Adam Hanga, taking turns in the base position, he showed it, although it was Walter Tavares and Guerscon Yabusele who were in charge of blowing up the team in the first five minutes.

The 4-11 in the middle of the first quarter with Tavares dominating under the hoops and 5 points and Yabusele with 6 points, made Bayern react, which through Augustine Rubit turned the tables in an almost incredible way.

Madrid went dark and did not see a hoop again until the final moments of the fourth when Vincent Poirier scored the tie at 13 that ended the first 10 minutes.

Rubit extended his state of grace by scoring the first two baskets of the second act, 17-13 (min.11). Madrid had not scored any of the 6 triples they had tried and it had to be Sergio Llull, of course, the one who opened the can from long distance. Tristán Vukcevic took note and another triple returned Madrid to blue numbers, 17-19 (m.12).

Madrid began to give good sensations backwards and in attack and only the spectacular work and success of Othello Hunter delayed the advance of the Madrid marker, but the 5 triples scored and another arreón of strength and power from Yabusele, with an NBA dunk in counterattack with assistance from Jeff Taylor, determined that at halftime Pablo Laso’s team went 32-43 on the scoreboard.

The 30 points scored by the Spanish team in this second quarter are the best explanation for what happened, together with the fact that only 4 balls were lost and the rebound was dominated by 15-21.

Bayern came out better in the third quarter and in 2.30 minutes they scored a 9-2 run (41-45) who pressed the light and allowed him to grow morally.

Abalde with 7 points in a row, returned a more comfortable lead to his team, 44-52 (m. 24.45) in a match in which Madrid did not quite take the reins of the game and in which Bayern always seemed to be one step ahead from behind but with options to climb onto the beard of his rival.

The good defense over Vladimir Lucic, and his low scoring, was another of the keys until that moment, although Hunter’s return gave wings to the German team again, 49-52 (m.26). Two minutes before the end of the third act, an unspoken foul on Fabien Causeur and a technique on the Madrid bench allowed the Germans to tie the score, 53-53.

The low score of the Spanish team, 21-10 in 8 minutes, were weighing on their performance. The entry and a basket to draw by Llull, a triple by Yabusele and two free ones by Rudy were the best possible reaction in 1 minute, 53-60, although the good performance of Darrun Hilliard, 58-60, left all options open for the last period.

An image of Guerschon Yabusele. EP

Deshaun Thomas tied the game again, 60-60, and Hilliard, from the free kick, gave the Bavarians an advantage, 62-60 (m.31.30), after many minutes. Rudy in his first triple on the fifth attempt and another one from Causeur returned Madrid to dominance on the scoreboard, 62-66 (m.33.20).

With Tavares and Poirier on the track, Madrid tried to unbalance under the hoops and open spaces on the perimeter, but a technique to Poirier undid Laso’s plans with his twin towers, 65-66 (m.35).

A triple by Thomas, 68-66, was answered with another by Yabusele, 68-69 but another technique, this time to Tavares, the fifth, and the fifth personal also to Poirier a few seconds later, they left Madrid without centers for the last 3 minutes, 73-69.

Yabusele emerged again and a triple and two free games, plus another two free ones by Llull in the final seconds, gave Madrid the victory 76-80.

Incidents: Match corresponding to the eighth day of the Euroleague played at the Audi Dome in Munich before 4,982 spectators.