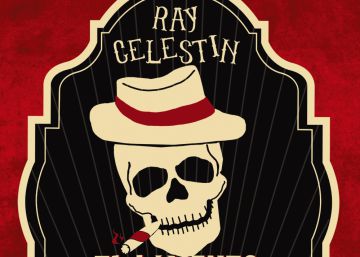 The mobster’s lament (Alianza Editorial, translation by Mariano Antolín) continues the ambitious series by Ray Celestin, determined to follow the trail of jazz history and mix it with the best of police. Already surprised with Jazz for the ax killer and confirmed everything with the overwhelming Dead man’s blues. This is the third installment.

They headed north through Midtown, past Times Square and its night rainbow. They cut down 7, then 52. They passed the jazz clubs on Swing Street, still pulsing with neon, music, and movement. They took Madison upstairs, which was quieter, as if respecting the time. The classic facades of their offices and apartment blocks were permeated with stillness and shadow, making them look like mausoleums, as if the street were lined with crypts. Gabriel imagined that the entire city was a necropolis, with skeletons behind every door.

The taxi turned onto 61st Street and there were signs of life: the Copacabana, located on what was otherwise an old-fashioned residential street in the wealthiest area of ​​the Upper East Side. There was still a meandering queue of people on the sidewalk, waiting to enter. There were doormen and taxi drivers and night owls heading home. The excitement of a nightclub. The muffled sound of music shook the air. They stopped behind the radio truck parked by the entrance to the Copa Lounge, next door. Gabriel jumped out, paid for the ride, and looked up at the ad: “Never a version that is not authentic or a minimal consumption.” Gabriel passed him on foot, right up to the entrance of the Cup. The doormen opened the cordon, letting him pass. He thanked them with a nod.

He went into the hall and down the stairs, and the sound of the orchestra increased; then the doors to the ballroom opened and the music hit him like a shock wave. The two o’clock show run was reaching its climax; Carmen Miranda on stage wiggled in a tight satin dress, her head scarf contained half a fruit bowl. Behind her a set of Samba Sirens broke hearts with their hips, mimicking Miranda’s movements with disturbing precision.

The club was close to full capacity: seven hundred people scattered across the various floors, mezzanines, and bleachers. On the stairs and ramps that connected all of this, managers and waiters went from one place to another. The Copa had started out as a modest attempt to bring the glamor of Rio de Janeiro’s hotel nightlife to the cold north, but it had become so popular that they had constantly had to expand the space. They opened a cocktail bar upstairs and the WINS station began broadcasting a radio show from there: the most famous hangout and its stunning girls. And you are invited!

Then someone decided to turn it into a movie: Copacabana, starring Groucho Marx and Carmen Miranda. Since the film required a soundtrack, the Copa was also turned into a song:

“Let’s go to Copacabana.” This song was the one that Carmen Miranda was dancing at that time. The Brazilian singer-dancer-actress had been hired at the club to perform for five weeks as part of the film’s publicity tour, and the song was the climax of the show. As his hips swayed to the rhythm of the atomic rumbling of the congas, Gabriel swept his gaze across the crowd.

At the bar Frank Sinatra and Rocky Graciano were totally involved in some kind of limbo competition with a couple of girls that Gabriel thought he recognized from the 42nd Street theater posters. He could appreciate the effect of bencedrine in their eyes. One of the girls fell to the carpet and they all burst out laughing. Frank clapped Rocky’s shoulder, as if something had gone right, and it might.

Behind them were a few second-rate movie stars and half the Yankees team players, who had flocked to the club every night since they had won the Baseball Championship a month earlier. Some men of the Bonanno family

they roamed there with women who could be their wives, girlfriends or mistresses. Members of the other four New York Mafia families were scattered around. In one of the upstairs boxes, protected by the darkness of some fake palm trees and mirrored columns, Gabriel made out O’Dwyer, the mayor, sitting at a table with a crowd of guys in suits, stirring with a cocktail shoulder a sad Mai Tai. The mayor looked up, and amid the clamor of the dancers his eyes met Gabriel’s. They nodded to each other. O’Dwyer was chosen with the support of Frank Costello, head of the Luciano family, the owner of the Copacabana, and the man who had commissioned Gabriel to run the club. Gabriel tried to make out the other men at the mayor’s table, but they were too shady. One of them took a pill from a cigarette case and put it in his mouth. As the orchestra attacked a crescendo, Gabriel took one last look around the room and was once again overwhelmed by what he saw, the idea that this was what they had come to, that this decadence was what had brought peace, the end result of the world falling apart, the slaughter of millions and shadows burning on the walls. He wondered, as it often did, if perhaps the world hadn’t died in the conflagration, and they all just dragged their existence into limbo, a necropolis, and he was the only one who noticed.

The orchestra came to the end of the song with an avalanche of conga rolls and a blast of brass. A kind of roar rose from the crowd and people hugged, some kissing. The eyes were shining.

The emcee grabbed the microphone and announced that the orchestra would be taking a break but would be staying with Martin and Lewis to keep them entertained. Dean Martin appeared on stage with a whiskey in hand; Jerry Lewis, with his hands in his pockets. Martin thanked the emcee and pointed a finger at him as he left the stage.

“Behind a winner,” she said, “is a surprised mother-in-law.” The drummer drew a beat. The crowd broke into laughter. Gabriel turned his back on it all, walked to a door with a “Personal Only” sign, and entered a cold, damp gray hallway. The door closed behind him and muffled most of the sound. After a few corners, he reached his office, unlocked the door with his key, and stepped inside. It was a windowless space, as gray as the hallway, with a stale, musty smell. It was dominated by a table covered by green cloth on which three men counted piles of money. They put money in piles, they tied the bills with rubber bands, they put them in trays, they sucked pencils, they wrote lists. The count was complicated, a list of what they actually earned, a list of what would be declared to the Treasury, a list of what the owners received, a list of what Costello and the Mafia would take from foreigners. Gabriel was probably the only person in the operation capable of keeping track of all this.

He locked the door and slumped into his chair, and the two passports looked as if they were punching a hole in his jacket. Six years of planning, ten days to go, and he was once again feeling nervous. He lit a cigarette and noticed Havemeyer, the oldest man sitting around the table counting the stacks, glancing at him.

Panic hit Gabriel’s chest and spread through his torso.

Havemeyer shook his head. He finished counting the pile, put a rubber band around it, put it on the tray and marked a point on the list. Only then did he turn to look at Gabriel. The lime-colored cellophane on his visor caught the lightning above his head and sent a garish green glow to his face, making him look like a character from one of the comic books Sarah left scattered around the apartment.

“He called,” Havemeyer said. He left a message through Augie.

“Did you say what you wanted?” Asked Gabriel. Then he realized it was a stupid question. The city had tapped on Costello’s phones, and while Costello had hired a telephony specialist to clean them up, he was only dealing with business in person.

-What do you think? Havemeyer said.

Gabriel tried to calm down. Costello may have had a job for him and everything was fine. Or maybe Costello had found out and Gabriel’s grave was already being dug.

-You are sweating? Havemeyer asked.

The old man seemed to believe him, because he nodded and went back to his accounts. One of the men placed a tray of money on top of the safe in the corner, a squat cast iron object whose shape had always reminded Gabriel of a bomb. Another of the men opened the door of the safe, and the dollar bills were swallowed by the darkness inside. If everything was an illusion, if in fact they had descended to hell, that bomb was the furnace that fed the dream.

Six years of planning, ten days to go, and the boss of all bosses had called him.