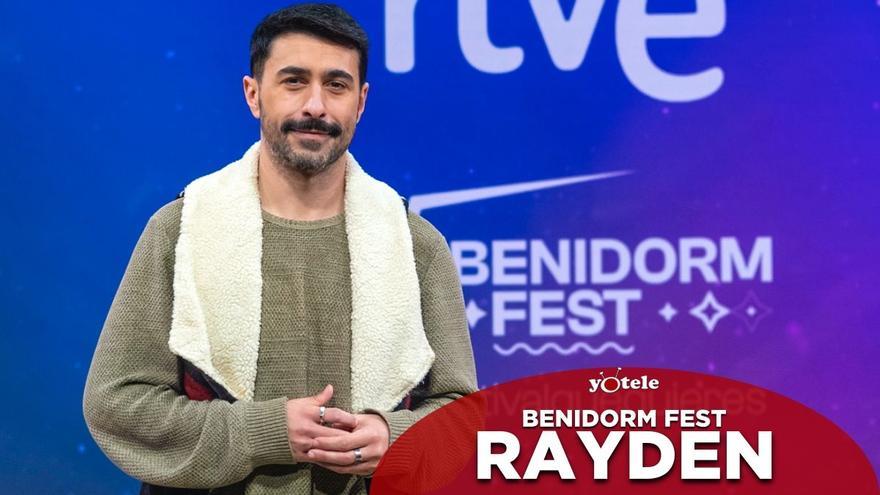 The first edition of 'Benidorm Fest' It is just around the corner. After several weeks of preparations, the 14 candidates and the last of their suitcases to travel to the Alicante town, among which are Rayden. The artist will participate in this contest with 'Crying Street', a song, which according to him, is "an x-ray of a society that sees vulnerability as something to cover up or make up".

Composed by himself together with Francois Legoffic, Rayden assures that "in the sound continent of the song I wanted to mix current trends together with the sound that prevailed in Spain in the 70s, creating a unique mixture without losing the coherence of what you can find in my songs". YOTELE talks to Rayden about his candidacy for the 'Benidorm Fest'

What encouraged you to participate in this first edition of the 'Benidorm Fest'?

Because I'm like that and it bit me (the bug). I am crazy and peculiar.

You have said that you and Ruth Lorenzo ended up at David Meca's house watching performances by Eurovision. Was Ruth the promoter of this candidacy?

Yes, totally. He is my mole in the shadow. I always ask for advice. She is my oracle.

How was your relationship with the Eurovision Song Contest before presenting the candidacy? Did you have any Eurovision referent?

I have followed him for the last three years. It was from the edition in which Mahmood participated because I love Italian music and the Sanremo Festival, that I have followed for many years. When I saw him with 'Soldi', my concept of the event changed. I understood that if you had a round song with a round staging and a round video clip, yes, they can take you into account. It was also reinforced with the participation of Barbara Pravi and Måneskin.

Within the world of artists, do you think that image has arrived that Eurovision is an open festival?

I have discussed this with my closest circle. I think that the emergence of generation Z has shaken hands with the Eurofans, and that has served to break down prejudices. Generation Z has a multi-style taste, very festival. I think it's time for Spain to start taking this seriously and not seem like this geek. Now that I'm inside I see a lot of love, affection and respect, not only in Spain, but in other European countries. I think that this year all this will begin to unite in favor of the culture rooted in our country.

What would you be most excited about taking your 'Crying Street' to Turin?

First, show off to my son. He is already studying the countries and wants to go to Italy (laughs). I think taking him there would be throwing the goop at me. I also consider that I make a genre of its own in itself. A very rare thing. Whatever happens, I have realized that it has a place in the media and I think that, if I go to Turin, there will be a lot of truth. Without detracting but, because of the message, I think he would be the artist who would carry the most truth in recent years. What I do is empower vulnerability. I think that in these times it is necessary.

Were you clear that you wanted to participate in the 'Benidorm Fest' with 'Calle de la llorería' or did you have more proposals?

As I am the lyricist and the producer together with François Legoffic, it was clear to me. It had a lot of elements to be the key. There was no plan B. In fact, it is the first preview of the next album. If I hadn't been chosen, I would have brought up the subject anyway, but I did see that it was a subject deeply rooted in tradition. As soon as you dive into it, you realize that there is a bit of saeta, comparsa and even chirigota due to the refrain of the ridiculousness of something that unites all Spaniards such as Twitter or a meme. Also, on a percussive level, you can also see my style.

How have you received the good reception that 'Calle de la llorería' has had among Eurofans and those who aren't?

Overwhelmed for good. Every time I look at the phone, it's on fire. From here I want to thank all the Eurofans and those who are not. In the end, it is a proposal close to rap, the first with aspirations to (represent Spain in Madrid). That they receive him so well seems to me a blessed madness.

What can you tell us about the staging? Is it going to be assimilated to the video clip?

That is in charge of Javier Pageo (creative director of his candidacy). In fact, before knowing if he was chosen, it was clear to him that if he were, he was going to do it with him. The good thing is that the best thing is the staging. Seeing the acceptance of the first, I already have a solid base for things to happen in the staging. Let's see if you can transcribe the mischievous little smile that I'm getting (laughs).

In other words, you fully trust the direct.

Do you feel favorite?

I'm going to be fake humble. From what I'm seeing, there are clearly three proposals that are a little bit on par, and it's something I never thought possible in my life. In fact, I consider it a simulation (laughs).

Many people say that this is the best preselection in the history of Spain in the Eurovision Song Contest. What do you feel when you hear that?

I feel part of the solution and not the problem (laughs). When I released the song, only two proposals had come out and I saw that many people commented that it was the best sensitive song to be a candidate in the last 15 years. I read it and it was a shock. I remember that at that moment I was making a colacao and I said 'Look, how nice'. As I was saying before, I am a big fan of Sanremo and for me this is like Sanremo but in Spain. Seeing the quality of the song, it is wrong to say this and maybe next year in other countries they will try to adapt the 'Benidorm Fest'.

There is a common feeling among the 14 participants that this is not a pre-selection for Eurovision. In other words, you have submitted a proposal to participate in a festival in Spain. It's the first time it happens.

Clear. There are no discards here, there is no attempt to please anyone. Here is the cover letter of the best that each group or artist knows how to do and I think all the beneficiaries have been all the people and the Eurofans because they have seen something to be proud of. I feel honored to feel that proposals like Tanxugueiras's, Rigoberta Bandini's or mine are reasons for pride and that they boast about them. This is very rare.

Have you talked among yourselves about possible collaborations after the 'Benidorm Fest'?

Tanxugueiras and I have a song together that we won't release yet, we don't know when. The other day we were recording the video clip with her and I, when I was lucky enough to play at my concert with the Wizink Center, I took them out. It is something that happened before. I'm sure other things will come up now. The stage is to share, not to compete. There are already people on social networks to pull their hair out. We are freaking out that other people's songs stick to us.