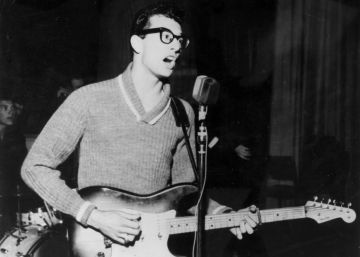 On February 3, 1959, a Beechcraft Bonanza plane crashed as soon as it took off from Mason City Airport (Iowa). The pilot and his three passengers were killed: the Chicano rocker Ritchie Valens, the Texan aspirant The big bopper and the biggest star, Buddy Holly

It was the first great tragedy of rock and roll and hit hard. Little used to death, his colleagues published abundant tribute records. In fact, the event became part of the myth of a cosmic conspiracy against rock and roll, which also affected Elvis, Chuck Bery, Little Richard or Jerry Lee Lewis. It served as the basis for the parable of American pie (1971), from singer-songwriter Don McLean. And he slipped into the cinema, already with retrograde resonances. Remember John Milner, in American graffiti The type more cool the town twists the nose when listening – we are in 1962 – to the Beach Boys and exclaims: “Rock and roll has been down since Buddy Holly died.” And Buddy was expected to guide the evolution of pop music as the sixties entered.

Actually, and this is a personal obsession, only the progress of an artist is fully understood if the objective conditions in which he develops his work are known. That is, his relations with the record company, the producer, the manager, the publishing house. Holly was “discovered” by Norman Petty, owner of a small studio where he made a good sound of electric guitars.

A guy with a nose: a few months earlier, Owen Bradley, one of Nashville’s most cunning producers, had been unable to find Buddy’s streak. In addition, Petty knew how to move around the industry: he got a double contract for Holly, one as a soloist and another as part of his group, The Crickets. True to the stereotype of the swindler representative, he insisted on co-authoring the songs that Buddy and his companions brought him. They were easy prey: they signed powers for all the income to pass through their hands.

Need we add that little of that money reached the pardillos? Buddy understood the immensity of the theft when, in New York, he fell in love with the Puerto Rican María Elena Santiago, who worked in his publishing house, Peer Southern Music. Once married, they began the process of breaking up with Norman Petty. That he responded with the heavy artillery of his lawyers, ordering the (scarce) payments to cease. Holly discovered that fame did not guarantee liquidity.

This is how Holly ended up embarking on the hard Winter Dance Party tour, five artists who toured the iciest areas of the country (to get an idea, Fargo and surroundings). Then they turned on buses and they had some dilapidated school buses, where the heating could or could not work. To save, they avoided hotels as much as possible and slept on the journey between one city and another. There were freezes down but the worst, they would remember, was the stench. After the forced two passes each night, even the uniforms stunk.

It occurred to Buddy to rent a plane and earn precious hours to go through the laundry, shower and rest between sheets. It was a good idea but, alas, it was a rookie pilot. Since then, there is speculation about what his career might have been. Resident in the New York Greenwich Village since 1958, he went to jazz and folk venues, wanted to study flamenco guitar and interpretation. Do not imagine anything transgressive: the last songs he recorded were ballads, elegant but ballads.

Anyway, Holly had already sown her seed. During his visit to the United Kingdom, he stunned the public, who had never heard rock at such a high volume (maybe it was the first time they heard a well-amplified Fender). Besides, Holly and the Crickets spread the concept of the self-sufficient vocal-musician group. Imagine John Lennon licking in the family home in Liverpool: “I could even go on stage with my glasses!”