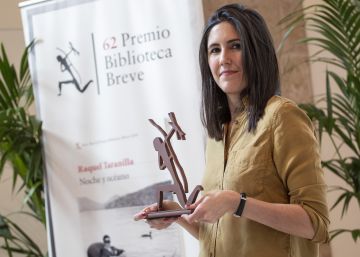 Raquel Taranilla (Barcelona, ​​1981) has been the winner of the Short Library Award in its 62nd edition for the novel Night and ocean, the first immersion in fiction of this professor from the Complutense University of Madrid based in the capital since 2016. The jury - formed by Lola Larumbe, Fernando León de Aranoa, Clara Usón, Pere Gimferrer and Elena Ramírez - highlights "the playful aspect and parodic "of this" story overflowing with intelligent humor and enormous expressive energy, written with great confidence and completely unexpected poise in a first novel ". According to the jury, this award gives way to "an unmistakable voice, as powerful as it is shrewd, which turns this book into an extraordinary work of an unusual quality."

The academic career is bullshit, I left and went back in the open. Teachers work as waiters to complete the salary. How to have faith in what you are doing

The winning novel stars Beatriz Silva, a professor of Sociology who discovers a story in the newspaper that disrupts her: someone has stolen the embalmed skull of silent film director F.W. Murnau and she is sure to know who she has been. This is Quiros, a filmmaker obsessed with making a policy about the mythical director, who lives in the same huge and dilapidated house.

The protagonist is, in certain aspects, alter ego from the author: "Bea is many things, like me," said Taranilla. "She is a university professor, is a super-willing reader and has an absolutely precarious existence." That precariousness that she shares with the character is what has led her to say, categorically: "The acemic race is crap." And he has specified: "Bea and I are professors in a Spanish university, and that is somewhat heroic. Many of my colleagues have completed their salaries by working on Waiters. How to have faith in what you are doing? "

But above all the novel, which Seix Barral will publish on March 10, is "the unhealthy fruit of the knowledge society." The film director Fernando León de Aranoa has defined it as "an intelligent game, a runaway and runaway monologue in the ocean of information that drowns us." His juror, the writer Clara Usón, has agreed: "It is very current, it is like a metaphor for Google, which paralyzes it and keeps it held at home," said Usón.

The bookstore Lola Larumbe, member of the jury, has highlighted the references and winks that the novel has with the work of Eduardo to Mendoza, Vila Matas or David Foster Wallace. Night and ocean It includes a lot of notes that could confirm almost another book, very much in tune with the work of the American writer. But, as the award-winning author has acknowledged, the book is a response to Enrique Vila-Matas (whom he loves, he said), specifically to his novel Dylan Air. "That book was like a kick in the face," he explained. “I was making an unfair portrait of my generation and this book is the answer. And before the sweeping power of Bea's knowledge, salvation finally comes with laughter. It is a claim of cynicism. ”

The writer sent the manuscript without any faith, "from a humble and jaded position", as she has told. Taranilla has talked about the act of the prize (which is endowed with 30,000 euros) as a game of the "planet culture", as its protagonist would say. The writer, who has defined her book as a “gothic novel about a crush on a dilapidated house,” explained that the title took it from You will return to Region by Juan Benet, attracted by the idea of ​​"shipwreck and the search for hope".

In 2015, Taranilla published the autobiographical book My body too (Lynx Editions). The Short Library prize, endowed with 30,000 euros, has been convened since 1958 by the Seix Barral publishing house and last year fell to the poet Elvira Sastre.