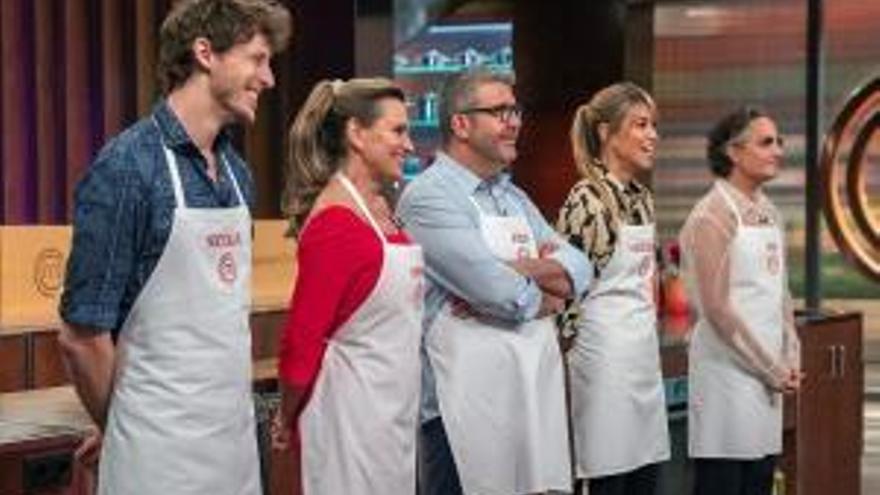 Although co-owner of a chiringuito in Tarifa (Cádiz), the actress Raquel Meroño entered the fifth edition of “MasterChef Celebrity” as the “microwave mom” and has won the title of winner thanks to a career and a final menu that convinced the jury and the three-starred Joan Roca and Ángel León.

Meroño designed his final menu with Oriol Castro, Mateu Casañas and Eduard Xatruch, the three chefs from Enjoy, with two Michelin stars and three Repsol soles in Barcelona, ​​traveling between Spain and Asia with a tuna sashimi, an Iberian pork tenderloin with Asian touches and a mango volcano with peanut butter.

He acknowledged that he did not even know how to fry an egg when it premiered in this “MasterChef Celebrity” and not only did it evolve, but it also knew how to take refuge in one of the most creative kitchen teams in Spain, that of Enjoy, to win the 75,000 euros allocated to the NGO Messengers of Peace, so that “they continue to feed all who need it.”

He fought with “pico y pala”, his mango volcano dessert with coconut, cocoa and aromatics against the first classified for the final, the comedian Florentino Fernández.

“Flo”, more kitchens and a glutton, was the first to get his place to fight for the title after being the best to overcome the complicated test of following Dabiz Muñoz, the only three Michelin stars in Madrid in DiverXO, in the elaboration of a lobster with aged chédar omelette and nam prik pao sauce.

The comedian worked his final menu with Toño Pérez, from the biestrelled Atrio (Cáceres), whom he imitated in the absence of his parody of “Flosie” in the final (as happened in the semifinal), since RTVE decided to eliminate any reference to the character homosexual that Fernández parodied by the audience criticism, and for which he publicly apologized.

His menu, although he forgot the potatoes for the parmentier, received multiple praises from the two chefs invited to the final, Joan Roca (El Celler de Can Roca, Girona) and Ángel León (Aponiente, El Puerto de Santa María, Cádiz), but both they with the jury composed of Pepe Rodríguez, Samantha Vallejo-Nágera and Jordi Cruz opted for the one from Meroño.

The actress presented some dishes in which she combined her passion for Bali, an island that marked him “deeply”, to which the judges gave compliments such as “makes you travel in an elegant way” or presents “subtle flavors”.

Both had 120 minutes to prepare a starter, main and dessert, in front of the usual jury – with a hoarse Pepe Rodríguez -, the guest chefs and their family members and fellow competitors as exceptional spectators.

“Flo” was the first to sneak into the final in the last outdoor cooking of this edition, which was done in another three Michelin stars, Cenador de Amós (Villaverde de Pontones, Cantabria), where Raquel Meroño, Nicolás Coronado, Ainhoa Arteta and Josie had to emulate a menu designed by their cook and co-owner, Jesús Sánchez.

The judges had to help the contestants to prepare the dishes of tomato albumin and Cantabrian anchovy, crunchy sardine coca and chickweed salad, lobster salad, coral cream and tarragon; Smoked cuttlefish and free-range egg timbale, grouper loin with seaweed butter and chard, Tudanca beef sirloin roasted with land blood, passion fruit and yogurt ice cream and its version of the San Marcos cake.

It was at a meal paying tribute to the work of the room, in which several sommeliers and room managers from Cantabria participated, as well as the president of the community, Miguel Angel Revilla, and the president of Banco Santander, Ana Patricia Botín.

At the Cenador de Amós restaurant, the only one that achieved in 2019 the third Michelin star in the guide to Spain and Portugal, the actress Raquel Meroño achieved her pass to the final.

The followers of this contest have a new appointment next Tuesday, when a new edition of “Masterchef Junior” begins.

Encounter between Diego Losada and Rocío Monasterio by TVE: “Have respect for the workers”