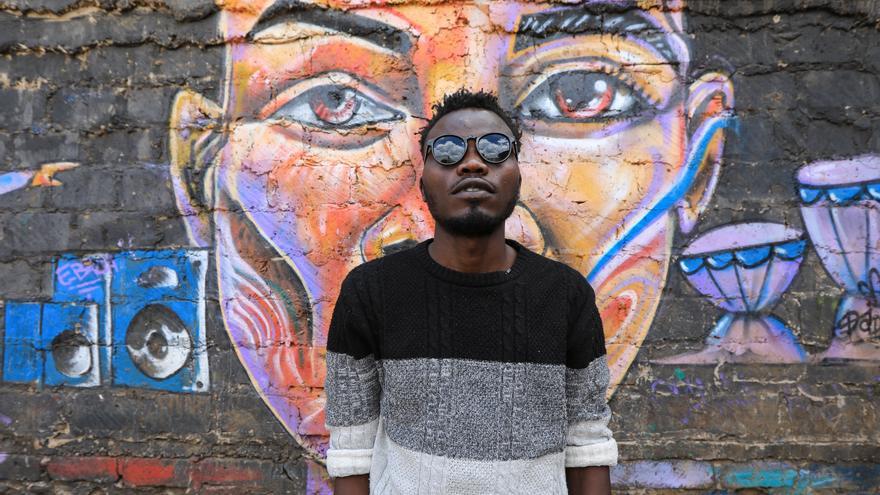 Nairobi, Mar 20 (EFE) .- "The thick blood of the kid who was shot in the ditch, the boys we lost by entrusting weapons to the wrong hands," sings the Kenyan rapper Wyban, in some verses that seek to denounce police violence in the informal settlement of Mathare, in the Kenyan capital.

Crude words, of mourning, but also of protest for the right to a dignified life are those wielded by Wyban and other young people from this neighborhood of Nairobi.

On World Poetry Day that is celebrated this Sunday, but also the rest of the year, the sung word has already become an essential part of the popular mobilization in Mathare.

Young people rap about rights such as access to water, a waste-free space or an end to impunity for police brutality, which has claimed at least 541 lives in Kenya since 2017, according to the Kenyan organization Missing Voices.

"The first thing I see when I get up are mountains of garbage, if I look around there are only gray houses, poorly maintained latrines. And that defines how we see ourselves," says Wyban, born and raised in Mathare and with just 25 years of age. .

Together with more young people from the neighborhood, this rapper promoted the Green Movement of Mathare (MGM, in English), in which they are dedicated to cleaning spaces overflowing with garbage and reoccupying them with trees to "change the environment and change ourselves."

Since 2017, "we have successfully transformed about seven spots," says Wyban, where the smell of rot has given way to the wet aroma of plants.

"Philosophically we choose the tree - fruit, medicinal, simply beautiful or memorial trees - because for us it is the symbol of our resistance, of our regeneration," says the activist.

And while these trees take root, the music also spreads through the streets of the settlement, because these activists, most of them artists at the same time, have found in the sung word the most effective tool to spread their vision "of a different future for Mathare, greener, with a politically conscious population. "

RAP TO EDUCATE AND REMEMBER

"The colonizers seized our lands, they deployed barbed wire on them", recites the rapper Stoneface, beginning to sing naturally in the middle of the conversation, as if the music were an organic continuation of his spoken discourse.

"I use music to liberate and educate the community, to speak out about the issues that affect them, as a channel to reach the masses in Mathare," says the 22-year-old artist.

When Stoneface Bombaa - Brian Otieno's stage name - started writing music, his lyrics had no social or political content but everything changed in 2016, when he discovered the Mathare Social Justice Center (MSJC).

Among the walls of this somewhat dilapidated place, covered, however, with colorful murals with slogans of freedom, the protest was organized that gathered hundreds of people against police brutality on June 8.

"The music is a witness. The children and the 'mama mbogas' (street vendors of vegetables) witness the murders but remain silent, and the silence is killing us even more than the police," he says. "Silence is a form of violence in itself."

Further into the network of irregular streets of Mathare, on the river bank where much of the garbage that these young people try to make disappear ends up, the Centro Sanaa rises, another modest space in structure but ambitious in objectives where they hold events of music and art every month.

"No race, no tribe separates us from you", intons Micko Migra, rapper and co-founder of the center, throwing a very significant verse in a neighborhood that has been the scene of strong inter-ethnic clashes in past electoral appointments.

"In our community, many people have not had access to an education and live in poverty, so if you tell them to read (their rights in) the Constitution, it will be difficult for them. But if you include that same information in the music, it they will understand, "explains Micko, 26, whose real name is Oula Agira.

THE LANGUAGE OF THE PEOPLE

A single linguistic DNA connects these songs of vigil and protest: most Mathare artists choose to rap in sheng, the local slang born from the mix of Swahili and English, when they talk about the violence that afflicts the community.

"When I write about the problems of my people I want to do it in the language they understand best," says Stoneface, while Micko Migra opts for lúo, the language of his ethnic group, one of the majority among the more than forty tribes that inhabit the country. .

Although neither trees nor words will be physical shields against violence for the population of Mathare, this generation of young people fights their own collective battle through music, to build consciences, and through trees, which green and dignify the space that inhabit.

"As artists, it is our duty to articulate what people feel so that they can identify it. They already know that the Police kill them, but sometimes they don't know how to say it or to whom. For that reason, you articulate it for them, because you are one of them. "Wyban concludes.