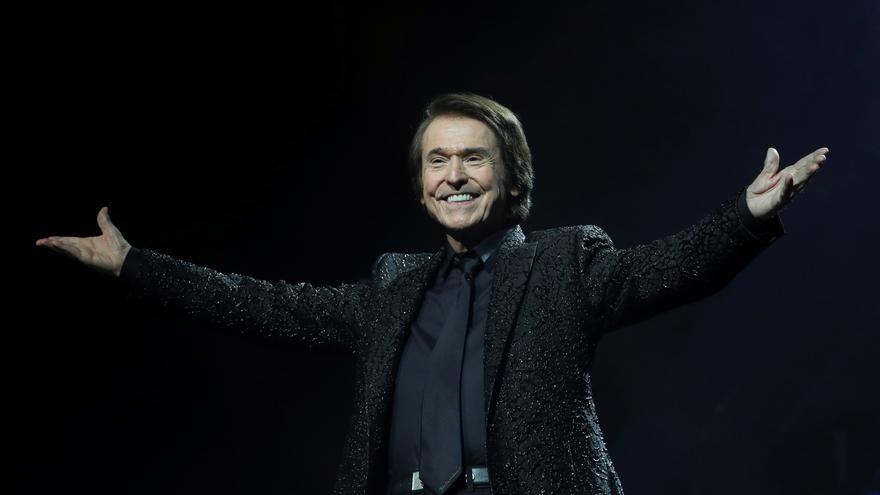 Madrid, Dec 19 (EFE) .- Not even the pandemic has prevented Raphael from returning for Christmas one more year to the main stage of the Spanish capital, and not with a low profile, but with a sold-out concert that 5,000 people have attended and first-rate guests, such as Manuel Carrasco and Pablo López.

Since last March these same stands of the Wizink Center in Madrid received 10,000 souls to enjoy Camela, no other musical event in Spain had received such a large audience, yes, with all the health measures and precautions activated.

“What a great happiness to have you in front of you. Tonight is very important to me and I know that for many of you too, that this begins to roll,” has certified the protagonist of the night before a general feeling and a panoramic view of the venue that encouraged the hope to regain the old normality.

The excuse well deserved this coming-out: to celebrate 60 years in Raphael’s career, an anniversary that just a few weeks ago motivated the release of the album “Raphael 6.0”, in which he covers equally mythical foreign songs with duos, such as “Resistiré”, “Our love broke” or the “I forgot to live” popularized by Julio Iglesias.

He never forgot to live, the incombustible artist born as Rafael Martos (Linares, 1943) specified in a talk with Efe, that what he has done often during his career is to emerge as the “Ave Fénix” with which he punctually 7:00 p.m. has jumped to the tables, true to its style, in rigorous black but giving space to fantasy with a sequined jacket.

After that atypical theme taken from his album of the same name published in 1992, in all probability a bet with double reading at the moment we are going through, the divo has not been slow to make his own another of the jewels of his latest album, “Living like this is to die of love “, by Camilo Sesto.

Where the voice no longer reaches the complex breaks and sustains of this type of Herculean songs is supplied by the formidable band that accompanies him on these appointments, a fifteen musicians, including a string quartet and a brass section, all before a triangular canopy and custom lighting to display flashes and underline each passage.

There has been the opportunity to listen to nearly thirty songs throughout the two hours and fifteen minutes of tonight’s concert, in which there has been no lack of his greatest hits, such as the very powerful (and now electronic) “Say what they say “and” My big night “, or like” I’m still that one “and” I was in love “, which have put the crowd on their feet and wanting to release the hours of dancing accumulated in the months of hiatus.

In between, it was the turn of the first visit of the evening, Manuel Carrasco. “I love him and admire him a lot”, he said of the Huelva bestseller, together with whom for the first time live he has shared that aforementioned “I forgot to live” that served as the spearhead of “6.0”, before addressing solitary “Face to face”, original by Bunbury, with which he has been able to exploit all his dramatic streak.

While still being Raphael, there have been many other opportunities to see him make pieces from outside his repertoire his own, even from outside this part of the world, such as “Vida Loca” by Pancho Céspedes and, from Argentina, “Nostalgias” by Andrés Calamaro , “Alfonsina y el mar” by Mercedes Sosa and “La March” by La Mancha by Rolando.

In some cases the celebration has been both for the interpretation and for the theme itself, as has happened with the powerful “We broke our love” who was orphaned without Rocío Jurado, after which he has paid tribute with “Adoro” to Armando Manzanero, currently admitted due to covid-19.

Pablo López has not missed the appointment, who for the last album made him a custom theme. “Truth, on a billboard at Olympia / with thirty, twenty-five or nineteen / waiting in dressing rooms / where it rains”, Raphael has recited, to which his “partner” has responded loudly: “thirty-five / thirty-six / his name on the poster / I dreamed that he wrote / a song, to Raphael “, causing a sudden climax of applause.

In this theme, the man from Malaga wanted to include as a wink the percussive base of “The drummer”, which has become so common and essential in his Christmas engagements and which of course has not been lacking today either to the joy of those present and as a preview of the great final fireworks.

Preoccupied with providing a brooch of height, the last section began with his colossal “En carne viva”, with that apotheosis ending that has once again put the audience on their feet, followed by “Ámame” and his reinterpretation of “Resistiré “, a subject that for years and years his wife demanded so much that he cover.

Thus, with the fifth gear engaged in the engine and the belt at full revolutions, the essential ones have arrived: “What does anyone know”, “I am that one”, “Scandal” and “As I love you” as a great culmination, all hypervitamins with the production that Lucas Vidal reimagined just a year ago.

“What a beautiful night! Thank you very much. And that next year we will see each other again with everything arranged, take good care of yourselves!”, The artist has asked, that tomorrow he will return to a new and last appointment in this space, because one Christmas without Raphael or music at the Wizink Center it is less Christmas.