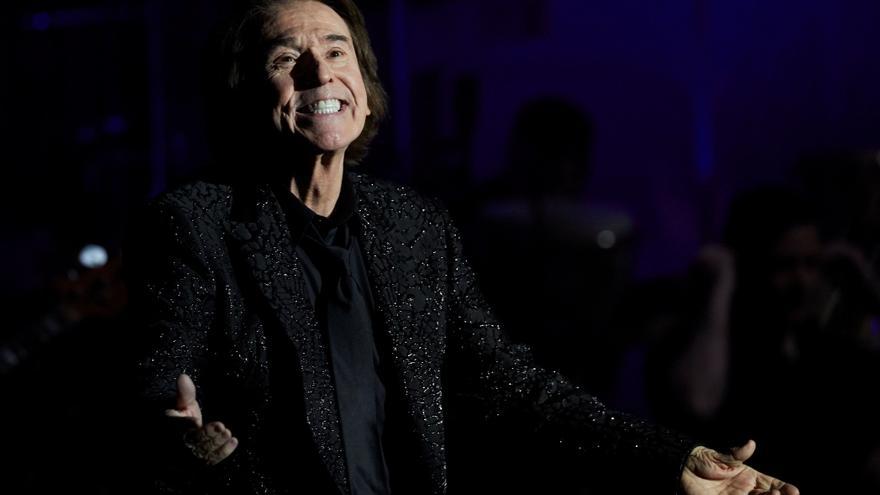 Barcelona, ​​Jun 13 (EFE) .- Intense, seductive, excessive …. Raphael “continues to be the one who always gets up again”, also after the pandemic, and who, as the song says, “loves with the strength of a madman “to his audience, with whom this Sunday he has met again in Barcelona, ​​and who has reciprocated with passion.

The director of the Jardines Pedralbes Festival, Martín Pérez, said it before starting the concert: “Raphael is from another dimension”, and that is that only someone like this can turn a concert with 1,800 people into the reunion of two lovers.

This is how Raphael and his audience felt tonight, like two lovers whose skin crawled when the first chords of “I am that” sounded and this 78-year-old artist has appeared on stage. Last November he tried to celebrate his 60th anniversary on stage, but until now he has not been able to resume the tour that began at the Wizink Center in Madrid, due to the restrictions imposed by the covid.

This time without controversy, the Linares divo has performed in the open air, before an audience that occupied 70% of the capacity and that the mask has not been removed at any time so that the evening could not be clouded by criticism, as it happened in Madrid half a year ago.

After the chords of “I am that one”, the first song that has sounded complete has been “Ave Fénix”, a title with a special meaning after the pandemic, because today’s reunion has not been only that of the artist and his audience, It has also been that of the artist and his audience with live music, summer festivals and those pleasures of life that this last year and a half have been so rare.

Actually, the oasis of the Pedralbes Gardens has managed to convey tonight the magical feeling that the danger has weighed, and really, although the pandemic is not yet defeated, for many of those present it is because, taking into account the Middle Ages from the public, the percentage of people vaccinated was high.

Raphael attracts followers of all generations, but the older ones are so much so that the average rises rapidly and it is a joy to hear from the public an octogenarian who says to her husband “look, yesterday it was terrible and now nothing”.

A reunion like this deserves a party in style, so Raphael, who is already one of those who does things in a big way, has surrounded himself for the occasion with thirteen musicians, has prepared a repertoire full of great successes and has sung tirelessly for more than two hours.

The first great success has been “Living like this is dying of love”, the song popularized by Camilo Sesto and that he covers on his latest album “Raphael 6.0”, an album of duets in which he interprets without complex themes that have marked his career. of others, such as “I forgot to live” (Julio Iglesias) “Our love was broken” (Rocío Jurado) “Face to face” (Jeanette) or “Resistiré” (Dynamic Duo), which were played live tonight.

In “Say what they say” he has taken his first dance steps, with a style that many young people would like for them, and the ovation has been unanimous.

In “Mi gran noche” the audience has sung from the first to the last verse; In “Nostalgia”, the star has shown that having 13 musicians is very good, but he is enough and there is plenty of it with a piano and his voice; and in “Ámame” the public has said “I love you” with conviction.

Love has floated in the air throughout the concert and more than one couple has not been able to suppress themselves and has kissed with a mask on, which is not easy.

After a “Resistiré” with pandemic connotations, a very heartfelt “What does nobody know”, in which the expressive and gesticulating face of Raphael has filled the big screen of the stage, and a very danced “Scandal”, despite the chairs and distances, Raphael said goodbye with “Como yo te amo” and launched a “Barcelona, ​​I love you so much!” that has reached the last of the reunited hearts.

With his hand on his chest, the veteran divo of the romantic song has left the side of the stage smiling and with the audience in his pocket, once again.Rosa Díaz