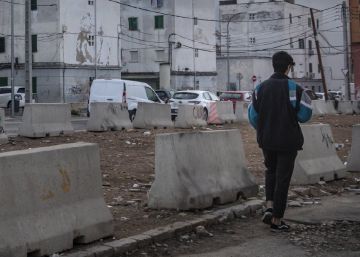 At eight in the afternoon it is already a closed night in the Korea of ​​Palma. Four men drink, sheltered in a porch of the degraded neighborhood of Korea, where simple, white housing blocks with green shutters, rise in parallel on the neglected pavement. In one of them, the youngest nightmare imaginable for Christmas Eve is under 14 years old. The girl says she was raped in a flat for six teenagers between 15 and 17 years old. A girl who was a friend of his intimidated him to submit to the demands of the group. A few hours earlier, just three kilometers away, several older men tried to exploit her sexually in a bar where, as she confessed to the Police, similar episodes had already occurred with other supervised girls who the Balearic Prosecutor’s Office investigates.

To the hardness of this story is added the situation of extreme vulnerability of a child who drags a history of helplessness that led her to be protected by the social services of the Administration, to which criticism is now directed. The group rape has uncovered the existence of at least 16 cases of supervised minors who have been victims of assault and sexual exploitation (although it is not known how many came to guardianship for being victims of this crime and how many suffered episodes of exploitation while already being protected ). They would be mostly girls to whom third parties have forced to maintain relations with adults when they leave the shelters daily or the sheltered flats of open regime, to which they arrive derived because their families cannot take care of them.

Following the Korea case, The Diario de Mallorca He published a report last weekend where social workers and police officers denounced with frustration the negligence and inaction of the Mallorquin Institute of Social Affairs (IMAS) and described as a habitual phenomenon, for years and with dozens of children affected, the escapes of girls under his tutelage to be sexually exploited in exchange for small amounts of money or gifts.

According to the local press, the educators had informed the Administration of the cases but, due to lack of means, they would not go beyond. Before the media pressure and after admitting the 16 cases of sexual abuse to 15 girls and a boy in their care, the IMAS convened a meeting with the Police and the Civil Guard, after which he took the opportunity to reject errors in the protocol, emphasizing that Cases are isolated, they are investigated and they are only before. The president of the IMAS, Javier de Juan, said that this problem affects “any child, come from the field that comes”, not just their guardianship. And he justified that the administration cannot supervise the activities that its supervisors carry out outside their centers.

A psychologist who has worked for one of these centers for years and who prefers to remain anonymous, notes that the episodes of “no return” (the technicality they use in social services to describe that a minor has not returned at the time touches) began to be more common five years ago, although it does not qualify as massive. “In recent years there has been a lot of concern about the cases of teenagers who do not return and their relationship with child sexual exploitation. We do not know if it is through an organized plot or with groups of boys from troubled neighborhoods that give them facilities to access sexual contacts, ”he says. This worker also knows about the existence of supervised girls who capture other girls in the same situation. Educators realize when the child appears with more money than usual, valuables or because they themselves count it.

The IMAS has delegated the competences in matters of child protection and manages on the island 30 centers for children with 278 supervised adolescents, six in their own homes and 24 concerted. “We ensure that children have a life as normalized as possible, that they continue to go to the same school, to the neighborhood activities they did before entering, to maintain contact with the family,” says Joan Ferrer, president of the Federation of Entities of Attention to Children and Adolescents Balearic. The little ones are accompanied in all activities, but when they enter adolescence, self-management is encouraged for things like going to class alone or taking the bus. It is there that the risk of them not returning increases. “Educators have the same tools as a parent to know how a child is, if there are changes in mood, if he speaks less. Continuing education is essential, because if a minor does not want to be in a center, he will not be, ”he says.

“One of the first approaches of girls to sexual exploitation is the non-return to the centers,” says Marc Tur, former director of the Office for the Defense of the Rights of Minors, which calls into question the methodology of the guardianship system and He asks if girls are really protected “when their free time is not fully supervised.” Tur believes that if the host institution facilitates everything that a teenager needs “they would not need to look for anything outside” and warns of the high risk of these non-returns because many of these girls have gangs, social networks and some are involved in very complex situations in which “they look cheated.”

The protocols of action of the centers require the Police or the Civil Guard to be notified as soon as they are aware of the absence of a minor, but the protocol of police action with minors of the Secretary of State for Security does not catalog “high risk” the cases in which circumstances concur that make the voluntariness of the disappearance evident. Something that is “worrying” for Tur, for whom all non-returns must be taken seriously.