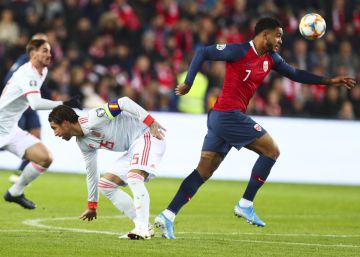 The tie blurred the night in which Sergio Ramos beat Iker Casillas and became with 168 games in the Spanish player with more internationalities. His performance was not brilliant either. He had dangerous losses in the ball outings and some against the Norwegians caught him out of place. In addition, the captain saw the yellow and will not play on Tuesday in Sweden. Now you must decide if you stay in the concentration or return to Madrid. "The record leaves me with a bittersweet taste," explained the central, who spoke with a mixture of enthusiasm and prudence about his desire to go to the Olympic Games, something that advanced The world.“It's too early to talk about the Games, but it's a beautiful idea. It would be quick to talk about it now. But no player with that possibility would say no, ”Ramos warned.

The Spanish coach Robert Moreno also finished the annoying game. After the final whistle, he accelerated to take the path of the changing rooms. The technician was shaking his head from side to side. It seemed to mix the disbelief for the penalty goal embedded in the discount with the disappointment for the game executed by their players, especially with the loss of control in the final leg, and for not being able to certify the classification by the European Championship. The false start of Kepa that originated the penalty was preceded by a play that defined the Spanish match at the Ulleval Stadion in Oslo. Saul lost the ball in a driving that led to a long pass to the area, a prolongation and the false start of Kepa that led to the penalty. Moreno did not want to pronounce himself if this was the worst game in Spain under his direction, but he did not hide that he did not fill his eye. “It was not the game we thought, but I do not have the feeling that we were created more danger than the play in which the goal has come. When a team has everything lost, what has happened can happen, they have looked for long and overlooked balls and there they are strong. I have a bad taste because it was at the end of the game. The message now is that with a draw in Sweden we are classified, and this is what we are going to try, ”said the coach.

The bombing of Norway in the last minutes with three tanks, King, Berge and the giant Serlyot cornered Spain in their area. “The games go crazy when there is a team that has nothing to lose, and that is what happened with Norway. In the end, they have taken the game where they wanted and we have risked a lot, but this is football, ”continued the coach. One of the black points of the Spanish performance was that the changes that Moreno designed to close the game did not give the expected result. The entry of Cazorla first and Rodrigo later did not finish curdling. “I didn't like that we have lost control. In short, we have generated opportunities to score the second goal and wish we could have defended those long balls. The plan was to have long possessions, but they have reached three points high and overwhelmed us. I would have loved to have had possession, but you lose it on that play and any rebound can be dangerous, it was not what we liked to happen, but it is what has happened. ”

Not everything was brute force in Norway. Odegaard shone and was a constant nuisance to Spain. “I'm going a little upset about not winning. It's a great result, but I think we deserved the three points, ”said the young Norwegian star, who said she saw frustrated Spanish players.

Saul also did not ooze joy despite achieving the goal that seemed to give Spain the Eurocup ticket. The first thing he did when he reached the mixed zone was to sing the mea culpa for the loss of the ball that caused the play of the penalty. “Maybe I should have stopped. It was a shame, for me personally it is very important to score, but in the end the goal has not served to win and give us the classification. From this draw, we must think about growing towards Europe, ”concluded the Atlético flyer.