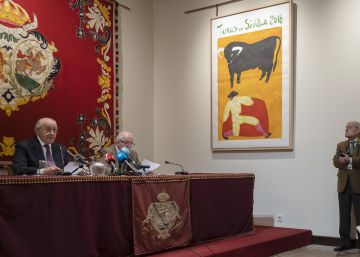 “Paco Ureña did not accept the offer made by the company, and has no reason to feel mistreated,” said Ramón Valencia, businessman of the Plaza de La Maestranza, in the presentation of bullfighting posters of the Sevillian fertilizer, which were already known in advance on social networks.

Valencia played down the filtration (“modern times are increasingly imposed”), asked several times “and why not Garcigrande?” In reference to the refusal of Pablo Aguado to deal with this livestock on Easter Sunday; He added that the bullfighters do not impose “absolutely nothing” on his company, and that he is the only one responsible for four cattle ranches double in the fertilizer, and acknowledged that the goal is no longer to increase the number of subscribers, but to hang “Eight or nine afternoons” the ‘no tickets’ sign, which will rise this year by 2 percent.

There were no last-minute surprises because the combinations of bulls and bullfighters were already in the public domain; nor was there in the words of the businessman, who amply justified his politically correct management in a sector so close to informative darkness and little friend of transparency.

“I would have liked Paco Ureña to be on the posters, but the bullfighter wanted something else,” said Valencia, who clarified that he had offered two runs, that of Santiago Domecq at the fair, and that of Juan Pedro Domecq in San Miguel, an offer that, in his opinion, was adequate to the work of the bullfighter in Seville. “I don’t think he has reason to feel mistreated,” he said.

He devoted much of his speech to explaining the reasons why Pablo Aguado, last year’s winner, is not on the Sunday Resurrection poster: because he has not accepted the bulls of Garcigrande, which are not to the bullfighter’s taste, he said . “And why not Garcigrande,” the businessman asked himself again and again “if it has been the winning iron at the fair for two years.”

He affirmed that Diego Ventura had all the facilities to be on the cartels, “but I cannot enter into personal rivalries between him and Hermoso de Mendoza.”

“Bullfighters impose absolutely nothing on this company; that is guaranteed, ”said Ramón Valencia when asked if the double presence of the cattle ranches of Garcigrande, Victoriano del Río, Núñez del Cuvillo and Juan Pedro Domecq was a decision of the company or an imposition of the figures.

In a long dissertation, Valencia explained that it is he who designs the livestock scheme according to the needs. And these require that you hire the livestock that bullfighters want and like in Seville. “I also prefer other irons,” he added, “but it is difficult for bullfighters to make gestures at this fair.”

One more year, he was asked about José Tomás, and again he replied that he had tried again and that he received the silence in response.

Is it true that Morante de la Puebla has offered to deal with Miura’s run in the centenary year of Joselito’s death? It was the last question.

“The press has a lot of imagination,” said the businessman from Seville.