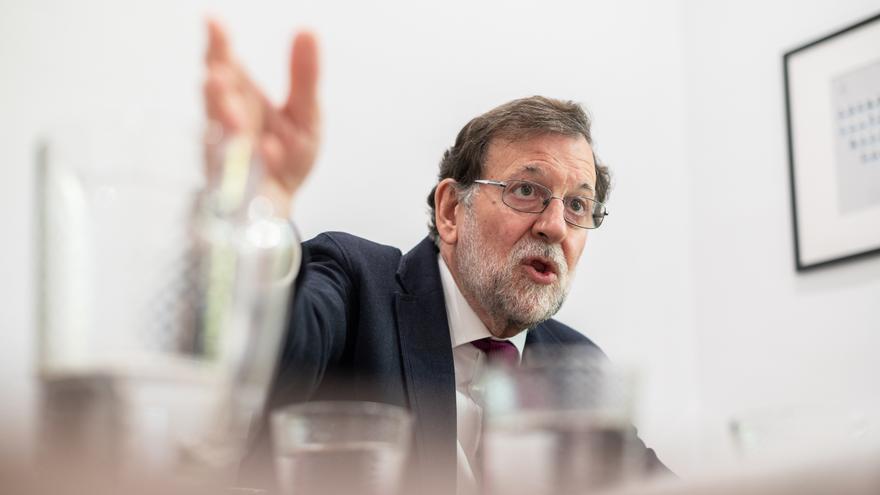 Mariano Rajoy is in full tournée promotion of your book Adult Policy (Plaza & Janés, 2021), a kind of essay on how a person who has devoted himself to it uninterruptedly throughout his working life sees public activity. In the book, the former president of the Government tiptoes over the issue of corruption, one of the slabs of his party. And it does not stop at resorting to the State sewers precisely to appease one of those investigations, the Gürtel plot, in which the National Court has been investigating for three years in the so-called Kitchen operation.

But reality has meant that his promotional tour has coincided in time with the moment of greatest political tension of the parliamentary commission on that operation, focused on espionage to the ex-treasurer Luis Bárcenas supposedly paid for with funds reserved to prevent compromising information for the party. and its leaders reached the Gürtel researchers. This week it was the turn of his minister, Jorge Fernández Díaz, who pointed to the conservative formation by ensuring that the parapolice operation could not be born in the Interior because the interest in Bárcenas did not correspond to the department he directed but to who could harm, the Popular Party. “The GAL or the Pheasant were internal affairs; Bárcenas was not a Ministry official”, he asserted.

Fernández Díaz is currently the main defendant in the Kitchen operation after the decision of Judge Manuel García Castellón of close unexpectedly last summer that piece exonerating María Dolores de Cospedal, secretary general of the party between 2008 and 2018, and without even citing as a witness Rajoy, the maximum beneficiary of that operation and direct head of the former Minister of the Interior. But in the absence of three judges of the Third Section of the Criminal Chamber of the National Court to decide whether the Kitchen case should be limited to the sabotage of the cause of box B of the PP, devised and developed within the margins of the Interior, or if it is necessary to continue investigating the alleged involvement of the party leadership, members of that leadership will have to continue giving explanations within the framework of the aforementioned commission.

After months of appearances, Rajoy will close the sessions on Monday, December 13. It is expected that during his speech the continuous references of Villarejo and others investigated to “El Barbas” or “El Asturiano”, the nicknames with which the members of the plot referred to him, will come to light. And also an Internal Affairs report with notes from the commissioner according to which the former president would learn of the offer and threats to Bárcenas in prison so that he would not confess box B.

These indications, which will clearly come to light during the parliamentary investigation, were not considered by the judge of sufficient authority to cite Rajoy as a witness, whom he did not even cite by name in the car in which he decided to close the instruction downloading all responsibility of the plot in Fernández Díaz. “No diligence that has been carried out so far allows to maintain that Mr. Villarejo had direct communication with any president or prime minister,” García Castellón wrote.

In his book, Rajoy also tiptoes over this issue. “I had to deal with various issues that affected the PP while I presided over it,” he says as if the corruption were not with him. Nor does it spare criticism of the press by saying that “when only cases that affect a party are reported, but those of its rivals are ignored or underestimated, it is evident that a distorted image of reality is offered.” The former president is also “surprised that a police report, the writings of a commissioner or a specific request from the Prosecutor’s Office become a kind of dogma of faith.”

The same attitude has been maintained in some interviews offered in recent days. He told the Efe agency, for example, that it is “absolutely false” that he destroyed evidence, as Bárcenas accuses him. But he immediately recovers a position alien to the matter and compares it with any other policy: “What could I have done more? Surely yes. In any matter of government I could have done more. I have never considered myself someone who is always right.” Also in ‘El Hormiguero’ he responded, briefly, about it. “You cannot ignore” corruption, he said. “In fact, all those people who acted badly have been condemned and are outside the party,” he added. And he settled: “The corrupt must be detected in time and take action.” A message, in any case, dedicated to those who now command the PP.

Days before his speech in Congress, what was his number two is cited. Cospedal, accused of this case last summer, plans to appear next week, on Thursday, December 9. The former secretary general will be asked by parliamentarians predictably about her secret meetings with Villarejo, which the judge frames in the right of assembly, and about another report from Internal Affairs that accounts for the existence of up to 70 communications, between calls and messages, between Commissioner Villarejo and the former Secretary General and his entourage between May and November 2013, during the first months of the espionage operation.

The agents cross the information of these contacts – extracted from a Samsung phone that was intervened in Villarejo after his arrest in 2017 – with the annotations that the policeman was making in their diaries. Thus, for example, it is established that on July 11, 2013, when the Kitchen operation was “born”, Villarejo and Cospedal spoke for 19 seconds and the police officer made the following note in his diary: “Cospe. Very fly with the summons. I advised him to call Chisco “, the nickname of Interior number two, Francisco Martínez, prosecuted in this case together with his boss, former minister Fernández Díaz.

During his appearance this week, the head of the Interior, albeit with caution, alluded to the possible involvement in the espionage of the CNI and of whoever had command over the Intelligence service during the Rajoy government, Vice President Soraya Sáenz de Santamaría, which he is facing. “I cannot go further, nor should I go further,” he said after specifying that he is trying to defend himself in court against the accusations against him and that, consequently, he could not, and should not, say more. This route, which was outlined by some deputies, has also encountered the judge’s refusal to investigate her.

A day before Fernández Díaz and also in the middle of a promotional tour of Rajoy, the parliamentary commission received the counselor of Justice of the Community of Madrid, Enrique López, who refused to give details of the meeting he organized between the lawyer who works for him. PP, Jesus Santos, and a friend of Bárcenas, Agustín de Diego, for belonging to his “private sphere.” López, current member of the leadership of the PP, was then a magistrate of the Criminal Chamber of the National Court when that meeting took place, in full investigation of the Gürtel case. To questions from the deputies, he affirmed that he limited himself to introducing him and refused to give details of the meeting.