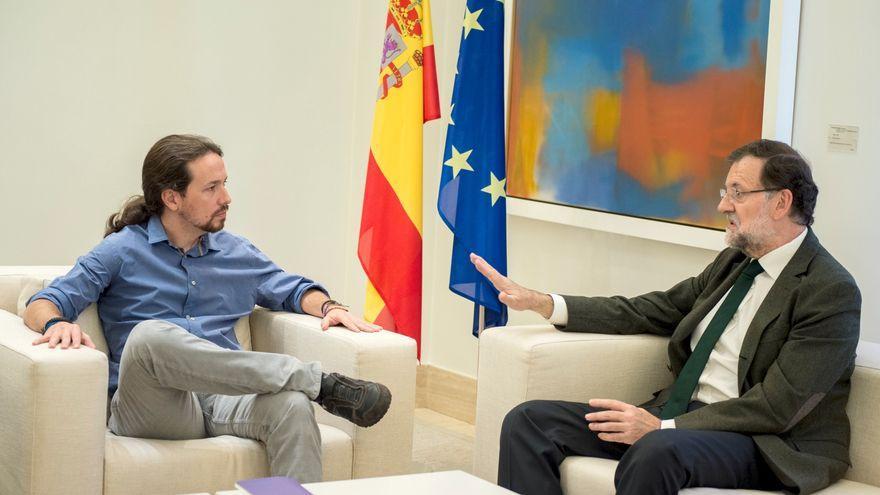 Mariano Rajoy did not know how to see it at the time, but now he is clear: populism is the origin of all problems and, since May 15, 2011, everything is populism. The former Prime Minister dedicates half of his second book (Adult Policy, Plaza & Jané) to denounce that populisms are bad. Of course, some more than others. Podemos and Ciudadanos, populism. The PAH and Stop Evictions, populism. Donald Trump and Antonio Manuel López Obrador, populists. Black Lives Matters, populism and, furthermore, identitarianism. The primaries in the parties, populism. Also the referendums and the Empty Spain. But especially Podemos and the former secretary general, Pablo Iglesias.

"In our country we can smell the unmistakable aroma of populism behind a multitude of events," summarizes Rajoy at the beginning of the volume. Rajoy even makes the genesis of this political movement and takes it to the Argentina of Perón and Evita. Perhaps he is not without reason since Rajoy must know what he is talking about because Alianza Popular, the party founded by Manuel Fraga and of which he was a leader and elected position, declared himself as "populist "in his founding manifesto. Because everything is populism, and populism is bad ... unless it allows the PP to govern. So it is tolerable, even if it is far-right.

That is why the PSOE has betrayed everything that is treacherous by governing in coalition with United We Can, while the PP does what is normal when agreeing to its investiture, and budgets, with Vox. "It is not a fascist party, that is false," says Rajoy, who does point out that Santiago Abascal's party "is the Spanish version of the national-populist movements that we see in many European countries."

"No one from the PP can share Vox's anti-European discourse, nor its demagogic policy regarding immigration, nor its discourse of radicalism and viscerality," adds the former president. "We are different and it is good to see that we are different," he points out. But it is one thing that they are demagogues and anti-Europeans, that the poster of immigrant minors that they used in the Madrid electoral campaign was "morally unacceptable due to the manipulation of data", and another to lose autonomous, municipal and even central governments. "This does not mean that Vox cannot support PP governments in different administrations", clarifies Rajoy.

The exception being made, the former president goes back to 2011. "I always thought that the leadership of that movement was led by the same extreme left of all life," writes Rajoy, for whom 15M was literally something organized by Podemos, despite that the party emerged several years later. That movement was the beginning of the end of the bipartisanism that until then had allowed the PP and the PSOE to alternate in power. A system that Rajoy defends as better than the current multiparty system and to which he hopes to return sooner rather than later: "Vox voters will return to the PP as soon as they are convinced that the PP is the great electoral platform of the entire center-right Spanish and the party that has a real chance of reaching the Government ".

The bulk of the book's criticism falls on Podemos and its founder. The book does not have an onomastic index, an express decision of the author, he says, perhaps to hide the dozens of references to Iglesias and his party, and the very few to other formations or leaders. Pablo Casado hardly speaks, except to criticize the primary process by which he became president of the PP and which he himself established. Of those who accompanied him in the Government, he only mentions Soraya Sáenz de Santamaría and Fátima Báñez.

De Iglesias says he has failed in his plans. "Time has allowed us to verify that between the promises of the activist Iglesias and the actions of the Vice-president Iglesias a distance was generated so great that the political Iglesias ended up sinking in it," he says. At another time, he called the "contribution of the ministers of Podemos to the government of the country" as "negligible and absolutely dispensable".

He reproaches the former vice president, for example, for having criticized certain judicial decisions, such as the conviction of Isa Serra, which led to a reprimand from the CGPJ. The former president of the Government contrasts the attitude of the former leader of United We Can to those of the PP. Obvious Rajoy that he was resigned by two attorneys general, Eduardo Torres Dulce and Consuelo Madrigal, due to pressure from their ministers; or that it was with his Executive that Operation Kitchen was launched, the use of State instruments to destroy evidence of PP corruption and which is now being investigated by the National Court.

About his responsibility in that corruption, just one line: "I had to deal with various issues that affected the PP while I presided over it." Rajoy cannot avoid criticizing the media in this case: "When only the chaos affecting a party is reported, but those of its rivals are ignored or underestimated, it is evident that a distorted image of reality is offered. ". The former president is "surprised that a police report, the writings of a commissioner or a specific request from the Prosecutor's Office become a kind of dogma of faith."

Rajoy also attacks Ciudadanos, but with much less intensity. In fact, he recognizes the legitimacy of Albert Rivera to try to occupy the space of the PP, although he maintains that the beginning of the end was the decision that Inés Arrimadas left Catalan politics by the Congress of Deputies. Although he regrets the ways he used against him, Rajoy reveals that after both leaving politics they had lunch together, where it seems that they reconciled. "Rivera is a very young person with many qualities," he says. And he leaves the door open for me to return to the front line: "I do not know if politics will tempt him again at some point. If so, I am convinced that he will act with more serenity and will be more condescending and flexible."

Rajoy reviews very briefly some of the most complicated moments that happened during his stay in Moncloa, especially those related to the deep social cuts that he undertook and the bank rescue. The former president laments, like this same Tuesday Pablo Casado did, that Europe has now opted for a different way out of the crisis, and even points out that changing budgetary restraint for expansionary policy is, in part, its merit.

What he did not have to deal with was the exile of the king emeritus. A decision that he considers wrong and that he attributes, in part, to the Government of Pedro Sánchez. Rajoy first qualifies as "possible errors" the fact that Juan Carlos de Borbón had money in foundations in tax havens, and proclaims the presumption of innocence for the ex-king. He says he does not understand the reason for the decision and claims that he can "enjoy the last years of his life in the country he served so much."

The former Prime Minister writes his "personal support" to the former head of state and points out that "if he had been in charge of the government, he would have strongly discouraged leaving the country."

The defense of Juan Carlos de Borbón and his successor are nothing more than the protection of the monarchical system, regardless of who occupies the throne. "In Spain, democracy and monarchy are inextricably linked," says Rajoy.

The former president will present his second book this Wednesday and the attendance of the PP staff is expected. In fact, it may be the reunion of Casado with Isabel Díaz Ayuso, whom Rajoy does not name much, but of which he is proud of his 4M electoral result. Because, in the end, that's what it's all about: winning the elections and governing. Whoever it is, and whatever it is.