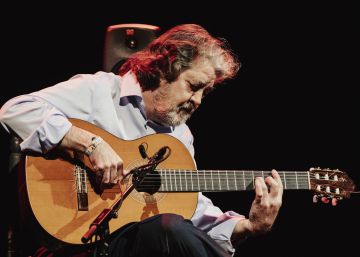 Since the return, each reunion becomes an event. It is not for less, because the absence lasted too long, so, from this reborn life of yours, you must seize every moment. Perhaps because of that, the loyal public of the Sevillian guitarist Rafael Riqueni He receives his deliveries as an authentic celebration: with love, devotion and surrender. It is nothing more than the fair correspondence to the emotions caused by his music, which brings together flamenco and lyricism, air and depth, a polymorphic musicality that populates with melodies of strange and amazing beauty. Listening to it on stage tables is confronting the man who shows his past in the shy look, who is the same man who approaches divinity with compositions in which the most flamenco canons happily coexist with fantasy.

On this occasion, it was to present his next record delivery, scheduled for the month of March. He has titled it Heritage and, with her, he returns to the discipline of the flamenco concert guitar after his celebrated work Maria Luisa Park (2017), which exceeds the formal limits of the genre, but shares the same inspiration and sensitivity that animates the themes of this new album. These are nine flamenco styles, each one dedicated to the author’s contemporary masters: seven guitarists — Serranito, Paco de Lucía, Manolo Sanlúcar, Pepe Habichuela, Enrique de Melchor, Joaquín Amador and Tomatito — and a couple of queries, such as Enrique Morente, always faithful, and the dancer Mario Maya. For him he has composed a farruca, which illustrated with elegant plasticity the Cádiz dancer María Moreno. It could be one of the moments of a night when it is difficult to choose one.

The exhibition of these themes of the album, however, barely occupied half of the concert, because the aforementioned celebratory character contributed to the fact that the thing lasted until about two hours. Before what was a joyful extension, the guitarist could be enjoyed in his solitude and intimacy, only on stage, except on a couple of topics, and maintaining an intimate dialogue with his instrument. The interpretations of the styles – granaína, soleá, sevillanas, taranta, seguiriyas, alegrías, farruca, bulerías and tangos – are brief, but each one of them manages to summarize a guitar treatise. The force of a sting, the delicacy of an arpeggio, the closing of a curb, the silences … There is plenty of haste, everything in its time. The touch is slow, but it can take on tone and cause a pinch at any stretch. Increasingly, the guitarist’s speech seems to gain in clarity and firmness.

The onomatopoeic Trills, from the María Luisa Park album, was the bridge that would prolong a concert in which, as a reunion, some of the artist’s most emblematic themes could not be missing, such as his well-known adaptation of the processional march Bitterness, which was scraped with longitude and astonishing fidelity. The audience interrupted the interpretation and forced the artist to greet with an indisputable smile of satisfaction. Similar to what happened with ‘That night’, Rescued from his recording Crystal Alcazar (2006), another beauty with bolero soul this time. With the huelvanos fandangos, homage to Niño Miguel, the whole combo has already participated, and the concert, with the memory of Manuel Molina (Green rosemary) and the rumberos airs of Damalabara, took on another air. Apotheosis was, in any case, inevitable. We had to calm down and nothing better than the tremolo of Picking roses to illustrate the appearance of Rubén Olmo, who, with his masterful use of the shawl, pretended to be a bird before melting into a hug with the teacher.