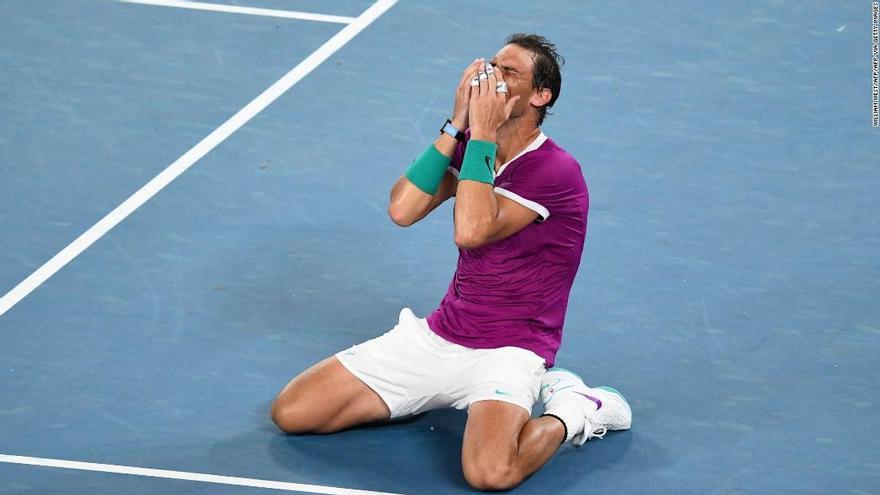 At 12:05 a.m. last Sunday, an artificial intelligence system used by one of the channels that broadcast the match, gave Daniil Medvedev (number 2 on the men's tennis world circuit) a 96% chance of winning compared to a meager 4% given to Rafael Nadal. Right at that moment, the score was 2 sets to 0 for the Russian and 1 game to 0 in the third set. Minutes later, Medvedev had three break points to take a 4-2 lead in what would be the final set of the match if he won it.

Three hours and ten minutes after that moment and after a total of 5 and a half hours of tennis battle, Rafael Nadal managed to turn the match around in one of the most epic comebacks ever remembered in a Grand Slam final, defeating a player 10 times younger than him, against all odds and exciting millions of sports fans, even the most experienced commentators.

His victory at the Australian Open, in addition to erasing the trace of all the controversy related to the absence of Djokovicbreaks the tie between the players that make up the so-called Big 3, placing the Spaniard with 21 Grand Slams, ahead of the 20 of Roger Federer and Novak Djokovic. From sports journalism it is often said about Rafael Nadal that words run out to describe what he has achieved. But yesterday the front pages of numerous national and international media tried to do justice to what the Spanish athlete had achieved.

"The greatest", "When they tell you that something is impossible, think of Rafa", "The best in history" read the Spanish covers. "The Martian", headlined L'Equipe, "Nadal makes history with a comeback for eternity", headlined The Times on the front page. "Nadal is immortal", headlined La Gazzetta dello Sport. The image of Nadal celebrating the victory was also featured in the Wall Street Journal or The Guardian. Professional colleagues such as Roger Federer himself, figures from sports, politics or the world of culture have extolled his victory and what it means.

Nadal stated during the tournament that an injury that has kept him off the pitch for 7 months is incurable. He has a broken navicular bone in his left foot, caused by the mechanical stress to which the bone is subjected, which allows us to move in the race. In addition and as it was known, in December the Balearic passed the COVID "with severe symptoms", which made his preparation for this tournament even more difficult. From seeming to be ruled out for high competition to becoming the tennis player with the most Grand Slam titles in history.

Without stopping to get drunk for a moment and during the post-match press conference, Nadal responded to the question, Are you the best in history? "I know what it means to achieve 21 Slams. Today has been an incredible day. But I cannot forget how much I have fought in the last six months to come back. It has been very hard. I have had conversations with my team where I told them that I did not know if I was going to be able to play again. For me, I feel lucky to be here now." It is not the first time that it seems that Nadal has reached his limit.

Now more than 13 years and after having lost for the first time in his participations in Roland GarrosNadal had serious problems with tendonitis in one of his knees. After missing the Masters Cup at the end of 2008 and playing more than 100 games that year, Nadal left Wimbledon and announced his injury. Although he would compete again that year, he did not win any singles titles again.

At the time, and not without reason, many of the analyzes shared the same mantra: Nadal's career was not going to be long. His way of playing trying to get to balls in forced positions seemed to condemn his joints to accelerated aging. A Premier League manager even said "Nadal is 23 years old, but his knees are those of a 33-year-old man." Today he celebrates his 21st Grand Slam, having silenced the voices of countless experts who announced his retirement or simply the slow disappearance of his sporting achievements.

The last time that Medvedev and Nadal met in a Grand Slam was during the 2009 US Open final. That match, also long and disputed, ended with an agonizing victory for the man from Manacor. As soon as a match ends, Nadal confessed: "In the fifth and with 5-2, in addition to being dead, I was very nervous." Indeed, with all his fans suffering and in a game that seemed to turn around again, he recognized that he was at the limit.

And in Press conference Was beyond. He admitted that he was afraid: “Of course I was afraid. When you have a break point at the beginning of the fifth set and you are coming off losing the last two, it means you are in trouble. Really, I tried to avoid that thought, I always trust that I will continue to have opportunities, that is the way I face those moments. Toni Nadal himself, his uncle and coach for years, once defined the philosophy of his nephew: "Rafael is a person who gives himself many opportunities."

In tennis, faith is not a stamp that you place on an altar and on which you start praying. The faith that you can win a point, a game, a set, and ultimately a match, is forged in every shot. Self-confidence during a match is something that can be broken at any time. Nadal, who over the years has been becoming more and more aware of his strengths and weaknesses, has always said that one of the keys as a player in his case is that he is neither too happy when things go well nor does he suddenly collapse when things go well. the things go wrong. "You have to accept with the same tranquility the good and bad moments".

Nadal has come to declare that does not do mental training: "I try to focus on the daily effort. Forcing myself to do things well, especially the days when it doesn't work out. I've always done it that way, since I was little. That self-obligation to try to be better." Despite the fact that the Internet is full of references of dubious scientific origin using his words or his sports deeds to sell a way of doing business, his way of facing certain situations does have a psychological explanation.

Jose Maria Buceta, sports psychologist, stated a few years ago about the Manacorí: "What best characterizes Nadal is the concept of mental toughness developed in the seventies and later by researchers Kobasa, Maddi and their team at the University of Chicago. It is a personality pattern that characterizes many people who perform at a high level in stressful situations It has three components: commitment (the one that the person assumes to get fully involved in what he has to do, without avoiding it or simply limiting himself to complying), challenge (assumes the stressful situation as a challenge that it provides you with opportunities, instead of a threat) and control (perceives that you control the situation by focusing on what depends on it, on the strengths you have to perform, on your past experiences of success)". Behind the epic, there is a work ethic.

Majorcan tennis player declared on one occasion something that would surprise many regarding the image it projects: “I am not a self-confident person in anything in life. I am not a determined person in almost anything. I have never bragged about that. It is very difficult for me to make decisions…". However, on the court he transforms that personality to make decisions when it corresponds on the court: "...but when I play, in important moments, I have the determination to do something". And that something may be wrong. Or insufficient. In Sunday's final, there is the paradox that Medvedev scored more points than his rival and still lost.

Since he began his career, he has been able to count on resources at his disposal that many other emerging athletes have not been able to have. However, there is one last element that explains part of Nadal's success and that is related to his way of mentally facing life in top competition. An element that not even being part of a privileged class guarantees it. It is what Dr. Eduardo Anitua (who has treated the tennis player on several occasions) defines as "your emotional and affective shelter". His environment. His family and friends. In a context in which many would have capsized with success, Rafael Nadal is still the son, nephew and friend of many of the people who accompany him and who will carry out their work with the same tenacity as him. "It is a very, very solid family environment, in which Rafa feels protected and supported both in good times and in bad times", Anitua specified, turning what we all know as an individual sport into teamwork.

Rafael Nadal will go down in history as one of the best tennis players of all time. An extraordinary athlete with a career full of successes in unlikely and memorable situations. And above all, a mirror in which millions of people look at themselves to face their day to day, trying to imitate some of the values ​​it represents and that move away from the simple epic: commitment, self-control, determination. And also of what a priori seems more complicated and yet it is not: to continue granting opportunities, even when everything seems to indicate the opposite.