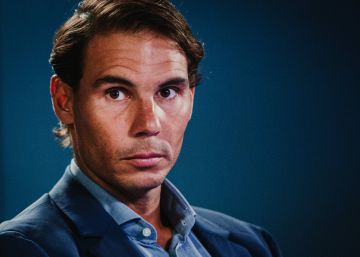 Although the question does not take away his sleep, because today his goals are very different and their efforts are mostly concentrated in the historical race for the great, Rafael Nadal He has found the prize: on November 4, when the Masters 1000 of Paris-Bercy concludes, the Balearic will recover the number one ranking of the ATP. It is the direct consequence of the fall of Novak Djokovic against Stefanos Tsitsipas in the quarters of Shanghai (3-6, 7-5 and 6-4). The Serbian, dominator of the circuit since last November 5, yielded to the young Greek and therefore will grant the throne to Nadal once the locker is updated later this month.

Djokovic will land in Paris still sitting in the poltrona, but next Monday he will lose 820 points and regardless of what he does there, where he defends the 600 obtained last year, he will lose his command because in turn he will deduct another 1000 for the final the Masters Cup he reached in 2018. Nole will arrive at the London Masters (from November 10 to 17) with a maximum of 8,945 points, while Nadal faces from now on a highway on which he can only add. The Mallorcan, 33, could not compete last year in this stretch of the season and now finds a booty ahead.

It is, after all, the Spanish regularity award, which has been completing a magnificent campaign. He has played fewer tournaments (11) than ever, but his performance has been optimal in virtually all of them. Except Acapulco, where he lost in the second round against Nick Kyrgios, Nadal has signed at least the semifinals in all the remaining events. Champion of Roland Garros and the US Open, now await two succulent goals, the Masters and the new Davis Cup (from November 18 to 24), and from the physical point of view he smiles because they are respecting his injuries.

Manacor totals 196 weeks at the top of the list, but Djokovic's stumbling block in Shanghai guarantees him at least two more, expandable depending on what happens in Bercy: if he wins the title there, one of the three Thousands that still do not appear in his medal list, along with Miami and Shanghai, he would make sure to close 2019 at the top. The last time he defended the one it was in the period between June 25 and October 29 last year; He previously linked another nine weeks (from April 2 to May 7, and from May 21 to June 11), and previously ruled firm for 24 weeks, from August 21, 2017 to February 12 of the following year.

Meanwhile, Shanghai continues its course and the valuable triumph of Tsitsipas – the second against Nole, and one against Nadal and Federer – was accompanied by Daniil Medvedev (6-3 and 7-6 to Fabio Fognini) and the fall of the Swiss before Alexander Zverev 6-3, 6-7 and 6-3. The duel between Federer and the young German left an unusual image, with the exchange of words between the winner of 20 greats and the referee, who penalized him with a point for throwing a ball in the direction of the stands after sending a setback to the net; yes, without bad intention.

* Results and picture of the Shanghai Masters.