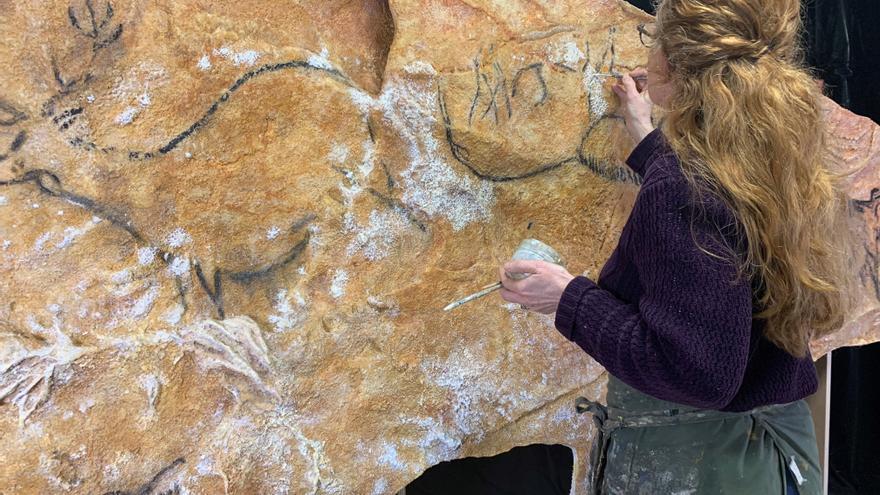 Toulouse (France), March 28 (EFE) .- Experts in prehistoric art work around the clock to maintain the memory of the paintings in the Cosquer underground cave, flooded by rising sea levels, and whose more than 500 works are being lost for the global warming.

The specialists working on the creation of the replica of the grotto want visitors to "be as impressed as possible" when they see a natural environment that was previously inaccessible, explains the artist and prehistorian Gilles Tosello, who acknowledges that since the beginning of the project has never stopped dreaming.

One of the peculiarities of the Cosquer cave, located in the southeast of France, are the paintings of marine animals, such as jellyfish, seals and penguins; although it also houses a bestiary of eleven species, with oxen, horses and deer, among others.

Another of the singularities of this prehistoric site are the sexual scenes, which appear together with engravings of human figures; and the numerous negative red and black handprints that are drawn on the walls of this cavity.

Geometric representations that "have nothing to do with humanity or animality" are also frequent, and that function "as a third crossroads in the iconography of that cave, of which their meaning is still unknown", Tosello describes.

And, only a fifth of the cave is known, whose total area is 2,500 square meters, although most of it is already submerged.

The rise in sea level due to thawing attributed to climate change raises concerns that more paintings will be submerged and progressively destroyed.

When prehistoric man occupied the cave, between 33,000 and 19,000 years ago, the sea level was 120 meters lower than today, but due to the thaw after the end of the Ice Age, the cavity has been gradually submerging in the depths of the Mediterranean.

The discovery of this ornate cave occurred between 1985 and 1991, when the diver Henri Cosquer, who gives this cave its name, visited it several times through an underwater tunnel 175 meters long and submerged to 37 meters deep.

A REPLICA OPEN TO THE PUBLIC

Now, the Provence-Alpes-Côte d'Azur region has started a project together with the Kléber Rossillon society to show the general public the pictorial wealth of the Cosquer cave, which remains closed due to its extremely difficult access.

Specialists from the Déco Diffusion artistic workshop in the city of Toulouse participate in this project, and they are in charge of recreating the Cosquer cave paintings using photographs and 3D technology.

Gilles Tosello, one of the people in charge of this workshop, makes the outlines and coloring of the engravings with charcoal and Roussillon ocher, while other artists work on the details of the walls of the grotto.

In one of these walls, made of resin, the Argentine plastic artist Lorena Acin operates, who is in charge of molding the fissures, textures and other reliefs with acrylic paints to achieve an almost exact representation of the rock.

"The challenge is to be able to work in the most faithful way possible so that when people enter they think that they are inside the cave (...) and with great respect to these wonderful men who did this work 30,000 and 20,000 years ago," he explains Acin.

The replica, which is scheduled to open in October 2022 in the Mediterranean Village of Marseille, will serve to show the importance of preserving archaeological heritage and raising awareness about the effects of global warming.

Visitors will be able to view reproductions of Cosquer's works from a small navigable vehicle to recreate in the most authentic way possible the atmosphere that its explorers described when they discovered it.

In addition, the complex will have an archaeological interpretation center where there will be a permanent exhibition dedicated to prehistory and the rise in sea level since the end of the Ice Age.