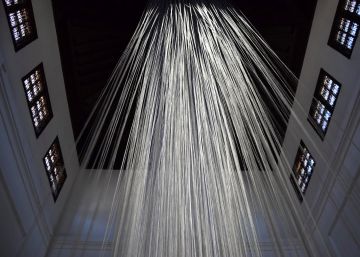 Sometimes in Morocco large paradoxes emerge that reflect the tensions of society. Last Monday, the same day that the manifesto of 490 women and men who declare themselves out of the law was made public because they understand that precisely Article 490 of the Moroccan Criminal Code punishes hypocritically with jail to who maintain relationships outside of marriage and they are also imprisoned at women who abort... That same day, the first Rabat Biennial was presented to the press, which has turned to the art of women.

The meeting offers works by 63 art creators from 27 countries. In total, there are 106 including Moroccans and the directors of the films on display, in front of 21 men. That is, they account for 83% of the sample, in the absence of closing the list of participants in the literature seminars. Because during the two months that the biennial will last, it is celebrated under the motto An instant before the world Until December 18, in addition to painting exhibitions, sculptures, street art shows and film exhibitions, there will be debates and seminars distributed in 11 different venues.

On the facade of the Mohamed VI Museum of Contemporary Art, the main exhibition site of the Biennial, a phrase written in English and Arabic can be read from this Monday that says: “The more important it is to follow our rules than to follow our hearts I will be feminist". The Austrian Katarina Cibulka explains that the work belongs to a series where she tries to answer the question of why it is necessary to be a feminist. Cibulka began his work in 2016 and since then he has been hanging it in various European buildings. Already installed on the cathedral of Innsbruck, in his country, another phrase for which he received all the support of the bishop, Herman Gletter: “As long as God has a beard I will be a feminist”

The curator of the exhibition is a man, the Algerian art historian Abdelkáder Damani. “The commissioner's work is totally subjective,” explains Damani. “If you are fair and analyze your work, you realize that what the world offers you is 90% of male artists and 10% of female artists. So, when you make your selection you choose few women without even being aware. That's why I made the decision to change things. I have made a conscious list, I have forced myself to discover other artists, although I already knew others before. ”

For starters, the biennial has wanted to honor the egyptian singer Um Kalthum, the greatest figure of the Arabic song, who died in 1975 at age 76. Commissioner Abdelkáder Damani, has reserved a place of honor in the Mohamed VI museum, where you can watch the legendary video of a concert in Rabat where he improvised up to 47 variations on the same topic before an audience that rose again and again from their seats to applaud him. "A look that I have taken for a greeting," the song said in Arabic. “A look so furtive and bearer of promises and oaths. Then, separation and pain. A look that I have taken for a greeting ”.

Among the guests at the Biennial is Zaragoza Lara Almarcegui, who was the Spanish artist selected at the Venice Biennale in 2013. If in Venice she presented a mountain of rubble over four meters high, in Rabat she decided to weigh Morocco. Almarcegui has done a study on the whole Moroccan territory, including Western Sahara, since the Moroccan authorities conceive that area as their own. Once the composition has been ascertained, it has exposed the list on one of the walls of the Mohamed VI museum. “I was interested to know what the country is made of. And what would happen if everything exploded. I like to think about the origin and end of the territory. I am obsessed with materials, I like to observe them as a child does when he breaks a toy to see what is made inside. ”

Among the Spanish artists is also the architect María Mallo, as well as the members of the TAKK study, formed by the couple of architects Mireia Luzárraga and Alejandro Muiño.

Since King Mohamed VI inaugurated in 2014 in Rabat the Museum of Contemporary Art that bears his name, the country is making a great effort to become an obligatory cultural reference within the African continent. Mehdi Qotbi, president of the National Museum Foundation, which enjoys the direct support of the Royal Palace, has been developing a great work in the cultural scene. In just five years of life the Mohamed VI museum in Rabat has organized Picasso exhibitions, has exhibited works by great Spanish painters, belonging to the Bank of Spain collection. And this year it hosted 42 impressionist paintings donated by the Orsay Museum in Paris.

At the first Rabat Art Biennale there are 63 women artists from 27 countries. But the only foreign Minister of Culture who attended the official opening last Tuesday was the Spaniard, José Guirao. When asked why, he replied: “There are three Spanish artists and one Spanish who have very interesting trajectories and projects. And we wanted to support his presence. In addition, we have a very good relationship with the Moroccan Museum Foundation and we are preparing two projects. We will present an exhibition of Moroccan contemporary art in the Reina Sofía museum in the coming months. And in addition, another joint exhibition with Morocco in the National Archaeological Museum, in Madrid ”.