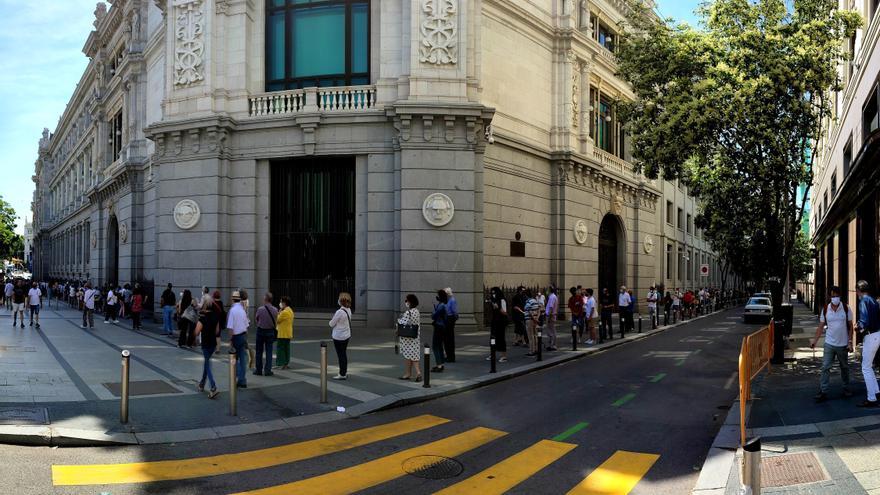 The few tourists who went out on Tuesday to walk through the center of Madrid taking advantage of the few hours in which the temperatures give a break in the summer of the capital were surprised by a long queue to which they did not hesitate to take photos. The line, with several hundred people, left the entrance of the Bank of Spain and meandered through the back streets, keeping safe distances and respecting the use of the mask, although it is no longer mandatory in open spaces. Those who waited their turn to enter the emblematic building kept large-scale bags, tightly tied bags or even freezer bags where they kept packages. "Are you all up for the pesetas?" Asked a newcomer at the end of the long line.

Indeed, all those present had responded to the call of the public body. This Wednesday, 19 and a half years after the entry into force of the euro, pesetas lived their last milestone, before becoming objects of no value beyond the sentimental or, who knows, numismatic. This June 30 is the last day that citizens can exchange the pesetas they still have for euros. This deadline is the final one, after several delays due, among other issues, to the coronavirus pandemic itself. The government decided in November to extend the agreed deadline, which was December 31, until June 30.

According to the estimates of the Bank of Spain last spring, there are still 1,584 million euros in pesetas in Spanish households, 799 million euros corresponded to banknotes in pesetas and 785 million to coins. Although the figure is high, it is significantly small compared to the more than two trillion euros that banks keep from their clients in deposits, according to the agency's own statistics. "Most of what we all bring is junk," admits a woman who holds, in addition to the bag with the coins, a book borrowed from a library, which she reads while waiting in line for a long time. She has arrived at the Bank of Spain at 8.30 in the morning and, as a man who is right behind her in line explains, they have been "an hour and ten minutes". They are lucky, they have barely fifty people ahead to enter the building.

The wait this Tuesday in Madrid reached two hours. "Let's see if we have time," they said among some of those who were at the end of the line, with doubts that they would reach the door before closing. One of them had already gone the day before but when he saw a long line, shorter than this Tuesday, he decided to leave it for the next day. Now, resigned, he points out that there is nothing left but to wait. Some of those present even doubt whether to wait when they realize what lies ahead. "Maybe it's not worth it," he says.

No one dares to recognize how many pesetas they have on them. "Something I carry," concedes a retiree who has just arrived in line, pretending that it is a good amount. Some do point out that they have to change little money, they are the ones who most doubt whether to keep the queue. A row that is very heterogeneous. Although older people are the ones who star in a good part of the line of citizens who wait to change their currencies, there are younger people. Some of them even admit that they had tried to sell their tickets online as a collector's item, before assuming that their only way out was to go to the Bank of Spain.

But why, after almost two decades since the euro was established, some have hurried until the last few days to change pesetas? The reasons expressed by those who have delayed the operation the most are multiple. There are those who did not know that it could still be done and had already given up on the opportunity and kept the pesetas as a relic. "I found out on Sunday, when talking to a relative told me that I could still change the coins I had at home," says a woman from outside Madrid who has taken advantage of some negotiations in the capital to go to the Bank of Spain.

"The truth is that we are a disaster, there has been time and we have left it until the last minute," says a woman about to finally enter the window for the exchange. "The truth is that I have come out of curiosity to see what the process is like, almost like a sociological experiment," he emphasizes. Although not everyone has taken management with the same philosophy. "They should have given more time, instead of doing it quickly now," defended a pensioner, unhappy with having to wait for the long queue ahead. Some even point to COVID-19 as the reason for delaying the process until the last day.

The truth is that there have been many years during which the Bank of Spain has allowed the exchange of coins and there have been several dates that it had set as a limit for the exchange of coins and bills that are still in Spanish homes. Despite this, there are many who in recent days have been annoyed with having to wait for more than an hour and a half to change their currencies. The information about what can and cannot be changed was also another criticism that citizens have angry with the process. The officials of the organization spend the morning in the convergence of several streets through which the line continues to answer the doubts of the citizens.

Queues have not been the general trend in recent weeks, since it was necessary to make an appointment to go to the different offices that the Bank of Spain has throughout the country, due to the limitations caused by COVID-19. However, in recent days he was allowed to go without the need for that prior appointment. The agency has been accepting peseta bills since 1939, including some from the Civil War period. However, the norm for coins affects only those that were in force in 2002, including commemorative ones and those of 2,000 pesetas.

This Wednesday, at 2:00 p.m., the offices of the Bank of Spain will terminate the grace period granted for the exchange of the old Spanish currency, which will now only remain as a relic of the past and without monetary value.