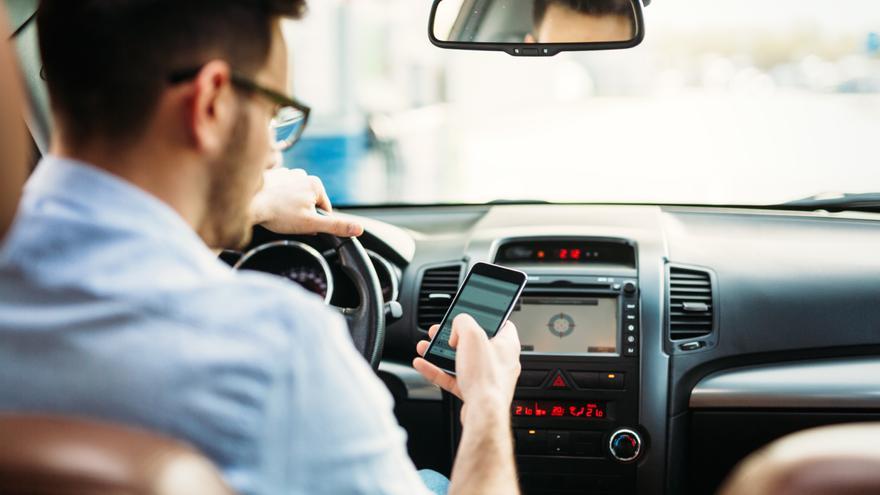 What happens if you drive and pick up your mobile phone?

The mobile behind the wheel is a time bomb, one of the main causes of mortality on the road. Distractions with the phone are behind 20% of deaths in a car. Despite this, almost 2 million motorists take selfies while driving, 2.3 million use social media and almost 10 million send WhatsApp messages while driving, according to a recent report by the Línea Directa foundation in collaboration with the University Institute for Traffic Research and Road Safety of the University of Valencia (INTRAS). “When we approved the card for points, there was no WhatsApp. It is very important to drive with both hands ”, explains the head of the General Directorate of Traffic (DGT), Pere Navarro, to argue the reform of the traffic law. Congress will give the green light this afternoon to the regulatory change, thanks to which from now on driving while manipulating the mobile phone - in addition to the corresponding economic sanction - will be punished with the loss of six points and not three, as has happened until now.

What is the penalty for not wearing a seat belt?

Wear the belt life jacket on the highway. It is by far the safety system that has proven to be the most effective in preventing death and serious injury in any type of crash. After a collision, reduce driver death by 50%. That of the copilot, by 45%. And of the passengers behind, by 25%. Hereinafter, not wearing the seat belt will be penalized with four points, instead of three. The same consequence will imply, in the case of carrying children in the car, not to use child restraint systems, as well as not wearing a helmet in the case of motorcyclists.

Can I have a device to detect radars?

No. Until now, using a radar detection mechanism was classified as a serious offense (withdrawal of three points plus the financial penalty). When the rule goes into effect, what will be penalized will be the simple fact of carrying one of these devices in the car.

What happens if I am caught cheating on the driving test?

The text classifies as a very serious offense the use of "unauthorized intercom devices" in the tests for obtaining and recovering permits. It is, according to the DGT, the most common fraud. The fine will be 500 euros and the applicant will not be able to re-appear to the aforementioned tests within six months.

How can I get my card points back?

If you lose points and want to recover them, an option offered by the new regulations is take and pass a safe driving course. It is a possibility that will allow you to obtain two additional points. You can take advantage of it as long as you have a positive balance of points. At most, you can attend a course every two years and you cannot have more than 15 points on your card. If after an offense you lose points - as long as you do not stay at zero - you can automatically recover the initial balance of 12 points once they pass two years without any infraction.

Is it mandatory to wear a helmet if I go on a scooter?

Yes. The rule establishes that drivers of personal mobility vehicles, such as electric scooters, will be obliged to use protection helmet in the terms that are determined by regulation, a measure that was not in the text that the Government approved in the Council of Ministers and that has been included in the parliamentary process.

Can I accelerate up to 20 km / h over the limit allowed to overtake?

Yes. Despite the insistence of the DGT - which wanted to ban it to increase road safety - parliamentary groups have opted for the rule to continue as it has been until now. Since the late 1970s, in Spain it has been authorized to accelerate up to 20 kilometers per hour above the limit allowed for overtaking on two-way roads, which for passenger cars are capped at 90 km / h. In those years there were no motorways and this license was granted to facilitate the flow of traffic. However, all countries in the European environment have eliminated this possibility to prioritize security. The DGT took the opportunity to do the same in the reform of the law, but it has not been successful. We will have to wait and see what happens in the Senate.