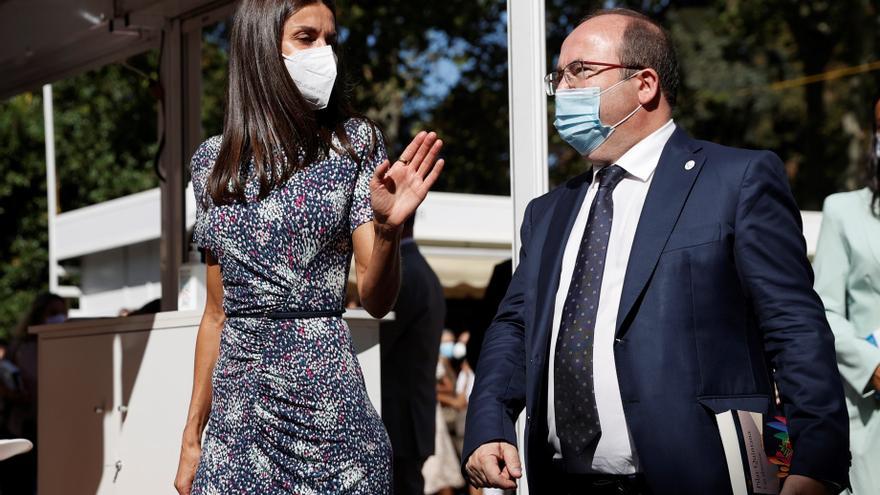 Queen Letizia opened the 80th Madrid Book Fair this Friday, from which she left loaded with several best sellers for her and Felipe VI and another batch of works and novels for young people of different themes for his daughters, Leonor and Sofía, a great fan of the "Los Futbolísimos" collection.

For an hour, the queen has toured more than a dozen booths, of the 320 installed at the fair, which has returned to the Retiro Park after two and a half years after the stoppage caused by the pandemic.

Doña Letizia, who is used to opening the great Madrid literary event, has been accompanied by the Minister of Culture and Sports, Miquel Iceta, and by the Vice President of Colombia, Marta Lucía Ramírez, as the guest country.

The capacity control established by the organization, limited to a maximum of 3,900 people, has streamlined the walk of the entourage, which has departed from the booth of the Madrid City Council and the annex of Colombia.

As in other years, the queen has stopped at the SM display stand, where she has taken two works of youth literature, "Amar es como se llama" and "Los Jóvenes COUNTRY", destined for Princess Eleanor and Infanta Sofía.

On this occasion, no book has been taken from "Los Futbolísimos", of which the youngest daughter of the kings is an enthusiastic reader, as its author, Roberto Santiago, has revealed.

"Infanta Sofía is especially a fan of 'Los Futbolísimos'. He has read the entire collection, and there are 19 books, which is saying a lot. It is an enormous satisfaction and pleasure ", has revealed Santiago to the journalists, who has added that another of the favorite collections of the daughters of the kings is the one of" The outsiders of the time ".

In Turner's booth, the queen has been given "Democratic Alphabet", by Manuel Arias Maldonado, a compilation of concepts from A to Z on the political model aimed at young people.

During her tour of the 80th Madrid Book Fair, the Queen has visited different exhibitors from bookstores, publishers, collaborators, institutions and entities that meet again in this # FLMadrid21. #LaFeriaDelReencuentro➡️https://t.co/ckHWhbljhZ pic.twitter.com/pwxJTVb0V4

This work has been complemented with another classic such as "Los Romanones: The Failed Transition to Democracy ", by Guillermo Gortázar, from Planeta, from where Doña Letizia has taken a bag full of the great bestsellers of this publishing house.

Among them, the new novels of Maria Dueñas ("Sira"), Fernando Aramburu ("The swifts") and Antonio Muñoz Molina ("Return to Where"), as well as "You and I, Invincibles", by Alice Kellen, a youth romance novel.

Before his eyes he had the book "Felipe VI: a king in adversity ", by the journalist José Antonio Zarzalejos, but this has not been part of your lot.

At Random House, they have given him "Los abismos", by Colombian Pilar Quintana, awarded this year with the Alfaguara Prize.

They have also offered the queen "The extraordinary years", by Rodrigo Cortés, but he has not taken it after ensuring that he had already read it.

Other stops on the route have been the Italian booth, on the occasion of the 700th anniversary of the death of the Italian poet Dante Alighieri; that of the ONCE, that of the Community of Madrid, and that of Paulinas, where they have given him "To reach love", a book about the first Jesuit fathers.

In addition to chatting with editors and booksellers, Mrs. Letizia stopped before the microphone of Onda Cero presenter Carlos Alsina, during the live broadcast of her program.

"All the culturetas are there. May the fair go well", the queen has told the announcer and his collaborators.

Among the authorities who have attended the opening of the fair, have been the mayor of Madrid, José Luis Martínez-Almeida; the director of the Book Fair, Manuel Gil, and the Secretary of State for Ibero-America, the Caribbean and Spanish in the World, Juan Fernández Trigo.