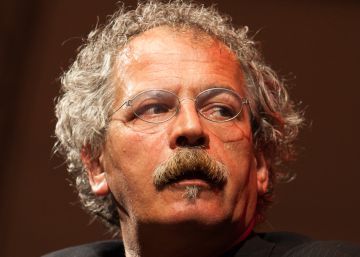 Gianmaria Testa is an Italian descendant of Brassens, of the chanson French (in fact his career started in France) and since Brassens had already been honored repeatedly by his other Italian "son", Fabrizio de André, Testa dedicated a disc to the other great of the French song, Léo Ferré, a gem titled À Léo, in the company of Paolo Fresu and some other Italian jazz players.

His songs are of naked and disarming sincerity, of a poetry full of images that seem to come out of an old Tintin comic. I dedicate Give this part of the sea to emigration. Finally triumphed with Il valzer di un giorno. He has written some of the most beautiful songs of the 21st century. Inside the bar I gave a qualunque matino or An airplane under sail They have a tenderness full of humor that gets you inside from the first time you hear them.

Self-taught, he was the son of peasants, and was station chief for years. He died 57 years old, in 2016. I have chosen a live concert, alone, with his guitar, which has a special emotion for me. I hope you like it.