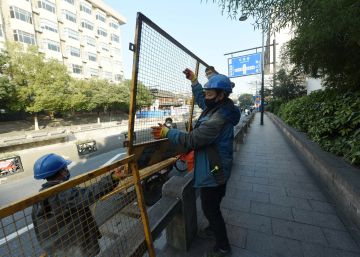 Each family must give the name of a person. It will be the only one authorized to go out, only every two days and only to buy food or medicine. A guard stationed nearby will take care of taking the temperature to see that he has no fever. It will also check the name, identity card and the reason to be away from home. It is one of the measures that Huanggang, a dormitory city of 7.5 million inhabitants neighboring Wuhan and the second most affected in all of China by the coronavirus epidemic, has adopted since last Saturday to try to contain the spread of the outbreak. The only exception: those who fall ill, who may go to a doctor to see them.

“Yes, they have become very strict. At home, my mother is authorized to leave. But, luckily, on my street we have the supermarket under the house, before we get to where the guard is, so she or I go down indistinctly. ” For Loski, a 20-year-old student at Hubei University of Technology, these outings have lately become the only adventure that breaks the routine. Everything is closed to lime and song. Pharmacies and supermarkets, as in almost the rest of the country, are the only exception. Not even their suppliers can enter the city: the cargo is left at the checkpoints at the entrances, and is distributed in authorized vehicles.

Like 700,000 other residents of Wuhan, capital of Hubei Province and origin of the epidemic, Loski had moved a few days before the lunar New Year to Huangang, his maternal home, to spend the family parties. On the 23rd, the sudden closure of Wuhan first, and Huanggang and another fifteen cities of Hubei later, left him trapped like another 46 million people in a quarantine that doesn’t know when it’s going to end.

Wuhan, with eleven million inhabitants, has become synonymous with this epidemic. The appeals of his medical staff completely overwhelmed, begging for donations of masks and other protective materials, have moved the entire country. Among the nearly 560 dead and more than 27,000 affected throughout China, more than 360 among the first and 8,300 between the latter correspond to that city. But another 35 million people also remain blocked by quarantine in a fortnight of smaller cities, with less basic medical facilities and services.

In the case of Huanggang, eighty kilometers from Wuhan following the course of the Yangtze River, the infected are 1,645 and 25 people have died. His doctors have discharged 52. But the city has also warned of serious problems of shortages of protective suits and masks and the risk that infections can soar. Last weekend, Hubei Governor Wang Xiaodong himself launched a distress call: “Let’s not let Huanggang become another Wuhan!”

An investigation of the magazine Caixin He found that “many patients are simply waiting for the necessary tests to confirm whether their symptoms are due to the new virus, but the resources are either in transit or are directed primarily to Wuhan.”

“It’s a very strange situation. No one leaves home. No one is seen on the street, and the only noise is that of the ambulances in the distance or the trucks that pass to disinfect, ”says Loski, in a conversation on WeChat, the Chinese WhatsApp. As in Wuhan, road traffic is prohibited, with the exception of official vehicles or taxis for emergency services. “At first I was very afraid. I was very suggested thinking that maybe I had been infected, ”he admits from there, in a conversation on WeChat, the Chinese WhatsApp. Until then, nobody had taken the news about infections very seriously. At first, not even the local authorities, who minimized the importance of the outbreak and tried to hide information for political reasons.

In this section, Huanggang has an unbelievable record: that of more officials reprimanded or dismissed for incompetence in the management of the crisis, 337. Among them his head of Health, Tang Zhihong, after he ran like gunpowder in social networks Chinese a video in which he was unable to specify how many patients were admitted to one of the local hospitals.

To prevent further spread of the epidemic, since Saturday Huanggang hardened the conditions of his quarantine. The prohibition of leaving the house imposed since then also extends to the towns of its periphery, which depend on the city administratively and where entry to outsiders has been prohibited. There, according to the official newspaper People’s DailyIf a family member or friend from abroad wants to bring food or any other type of supplies to their inhabitants, they will have to leave the packages at one of the access controls, so that their relative can pick them up.

Like many other Chinese citizens, Loski is very critical about the management of local authorities. He has had plenty of time to find out about mistakes, through the Internet, in these dead days he devotes to watching movies and playing on-line. “At the beginning things were hidden, and that was a serious mistake. If measures had been taken then, now perhaps the situation would not be so serious. It is very frustrating, why can’t they be transparent? ”On his home confinement, he is more contemplative. “It’s a drastic measure, but necessary to be safe.”

Before the spread of the epidemic, which already reaches all the provinces of the country, the quarantine in which this fortnight of cities live is spreading beyond Hubei and the original focus. This week, several cities in Zhejiang Province, including six million inhabitants Wenzhou, and several districts of the Hangzhou tourist, have also cut off their accesses abroad. To a lesser extent, a semi-quarantine state paralyzes the entire country, from the big cities to the farthest corners. The territory of Macao, the world’s gaming capital, the casinos have closed for two weeks. In Heilongjiang Province, on the northeastern border with Russia, several cities have announced that whoever leaves will not be able to re-enter. In villages of Henan, a central border province with Hubei, the inhabitants have closed from own motu their roads with improvised barricades. In this same province, a district of the city of Zhumadian has offered a reward to those who report the presence of people from Hubei.