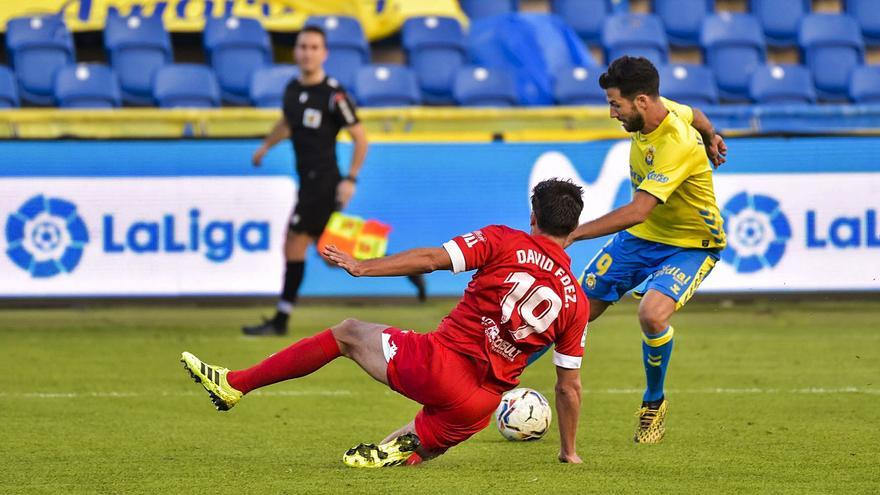 The error is part of the game –and a lot–, but when one becomes the leader, asks for the ball and ignores the request of the teammate –Rober, who had received the foul–, the failure sings more. That is why the possibility of UD advantage disappeared when he had done much less than his rival to get it, and at the same time it served as the starting point of a debate that, beyond the Tenerife, Pepe Mel continued after the meeting, on whether the team does not give for more due to a quality issue or if, on the contrary, it is due to a lack of ambition.

The technician is more of the second aspect, that his people do not take the step forward that they should take in terms of intensity and attitude, but the facts more support the theory that the squad gives for the objective that was requested, permanence, but not for bigger things. He added his fourth game without losing – a victory and three draws – and is in positions of salvation. The other reading, however, is that he has left behind six points against three rivals who did not put him too much trouble, which concludes that reaching the playoff today is little less than a chimera.

Even Mel himself fell into a contradiction: he said in his appearance that the players did not lack desire, but they did lack ambition, words that can pass for synonyms. Beyond semantic issues, that the UD is a vulgar team when it has to dominate is a glaring fact.

Because although Las Palmas finally registered 60% possession at the end of the first half, and 55% at the end of the game, it was useless. And it is not a question of style, but of quality. With three of the best players out due to injury –Pejiño, Araujo and Sergio Ruiz–, go ahead, nothing that Mel tried came out. Of thirteen crashes in which he scored, only in six did he have the ball longer than his rival –Fuenlabrada, Logroñés, Albacete, Lugo, Ponferradina and Alcorcón–. If it’s time to send, bad.

The Madrilenian once again dispensed with the pure extremes, which instead of taking their place fell more through the center, as in the last crashes. Thus, the objective was to give prominence to the full-backs and that is why, in the absence of Lemos due to suspension, he opted for Cedrés, but he got a frog and changed him to rest. On the left side, Dani was less than Jonathan, punished for his absurd penalty in the Anxo Carro, which also points to the coach.

The entrance of Fabio by Loiodice in the intermission did not suppose a solution either, as neither the one of Espiau by Iemmello, who showed once again that he is in another wave. He had a clear opportunity to shoot at the quarter of an hour after a good uncheck, but he got scared and preferred to feint and then center. The other imprint he left was a head comb inside the area that also came to nothing. For their part, Maikel and Benito, who replaced Kirian and Clemente, respectively, failed on their entry just as their predecessors had done before leaving.

Behind, the defense did not offer any security either in the center or on the sides – Alcorcón finished up to nine times – and only Álex Domínguez, who was the best, was saved from the burning. Mel, self-critical without explaining why, beyond the recognition of his inability to change the mentality of the players, attributed the fiasco to the lack of ambition of his own, above all, and still obviated that, with what he has, he does not gives for more. Perhaps between silences and contradictions he has called for reinforcements in winter, and then maybe the quality will make all the players seem hungrier. The problem for you is that you pay for it.