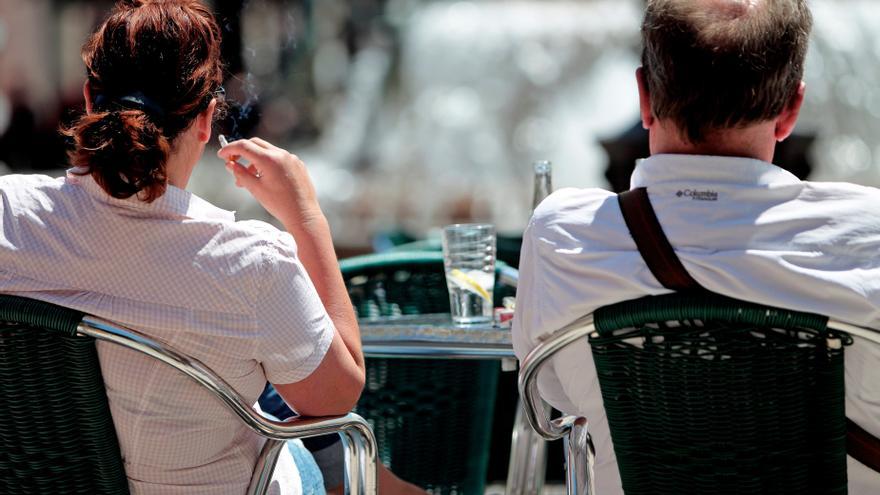 The Spanish Society of Pulmonology and Thoracic Surgery (SEPAR) warns that smoking on terraces makes them unsafe places for both users and hotel workers due to the risk of covid contagion, since the virus can spread with smoke up to eight meters away.

In addition, SEPAR also warns, before the next approval of the Decree on passive smoking and terraces, that other diseases associated with tobacco that passive smokers have can also originate.

This scientific society, which has its headquarters in Barcelona, ​​has already submitted to the Ministry of Health five "indispensable" measures that should be included in the reform of the current Anti-Tobacco Law, one of which is that the terraces remain free of tobacco smoke and the toxins released by the electronic devices used to vape.

In addition, the society of pulmonologists considers that "this measure should not be approved only circumstantially, to avoid the spread of COVID-19 on the terraces, but permanently, so that it helps to prevent the spread of this and other respiratory infections" .

Pulmonologists have recalled that tobacco kills 60,000 people a year in Spain, of which a percentage corresponds to exposure to smoke in non-smokers, and that it is estimated that, in Europe, at least 22,000 deaths a year are due to passive smoking.

According to SEPAR, in recent years there has been an increase in air pollution from tobacco in open environments such as the terraces of catering establishments, with a percentage of tobacco toxins in these spaces that ranges between 30 and 50%. for each smoker who uses these environments to smoke.

Pulmonologists warn that the harmful gases and particles contained in tobacco smoke in these places not only come from the smoker's exhalation and the combustion of the cigarette, but also from the butts or from the mixture of these toxins from the smoker with gases. of the atmosphere.

"These chemical agents remain over time, as they adhere to clothing, objects or other facilities on the terraces, and even remain residual in the smoker's exhalation for at least 10 minutes after finishing their last cigarette," he adds. the SEPAR.

According to the society of pulmonologists, this exposure in non-smokers carries a higher risk of developing diseases such as ischemic heart disease, neoplasms or exacerbations of chronic respiratory diseases, especially in hotel workers or vulnerable populations such as children or pregnant women.

SEPAR also warns that there is solid scientific evidence that demonstrates a dangerous association between COVID-19 and tobacco, since exposure to tobacco toxins is related to more serious presentations and a worse outcome of this disease.

"The presence of a history of smoking increases the chances of needing admission to the ICU or of dying by 79% and of developing severe COVID-19 by 96%," according to SEPAR.

"The spread of the SARS CoV2 virus is caused by aerosols when breathing, being greater when carrying out activities such as smoking or vaping. In spaces with smokers or vapers, coronaviruses with diameters of 0.1 microns can join larger tobacco smoke particles, being able to these aerosols loaded with viral particles reach distances of 8 meters", they emphasize.

"Therefore -summarizes the medical society-, the smoke exhaled from conventional tobacco and electronic devices represents an excellent vehicle for the transmission of virus particles between people."

On the other hand, smokers and non-smokers remain on the terraces for a longer time without masks, with the risk of transmission being greater, concludes SEPAR, which insists on the "indispensable" need for the reform of the Anti-Tobacco Law to extend the prohibition of smoking in open public spaces such as terraces.