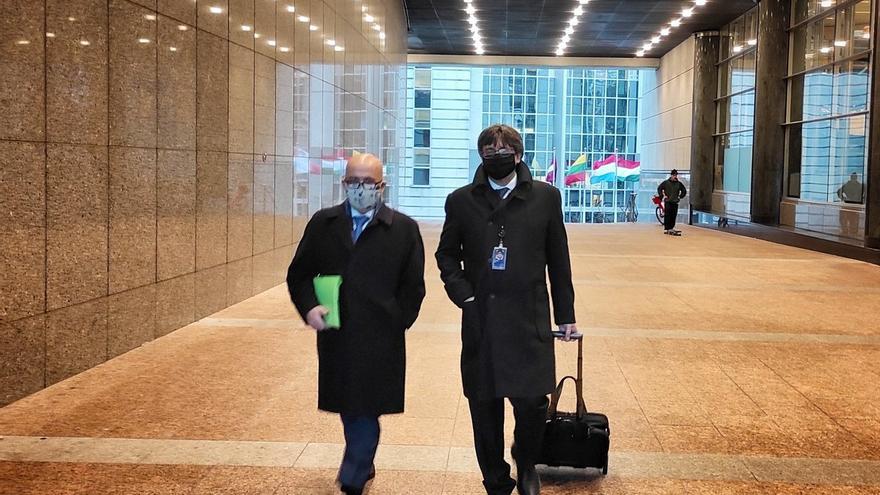 Carles Puigdemont, Toni Comín and Clara Ponsatí have defended their immunity before the European Parliament on Thursday and have rejected the request requested by the Supreme Court, among other arguments because the Belgian justice considered that it was not the competent court in its rejection of the euro order of the former minister Lluís Puig. The three have entered together to appear this Thursday afternoon before the Legal Affairs committee, which has fully entered into the Catalan case: first Puigdemont and then Comín, both in French, and Ponsatí, who spoke in English. After each intervention, there has been an exchange of questions and answers with the members of the commission. All this has been in camera, as they say in the European Parliament. That is, behind closed doors. From now on, the future of the request to lift immunity is in the hands of the European Parliament.

The appearances have been lengthened by the numerous questions from the MEPs and the answers without a time limit, and have concluded this Thursday around 8:00 p.m. Thus, a subsequent debate between the members of the Legal Affairs Committee without the three MEPs has been pending for this Friday morning, report parliamentary sources. And the vice president of the popular in the European Parliament, Esteban González Pons, who has predicted a majority support for the lifting of immunity, has acknowledged that the rejection of the Belgian justice to the extradition of former Minister Lluís Puig has been discussed in the room. consider that the Supreme Court is not the competent court to judge it. Some statements answered by Puigdemont: “Any comment on this breach of the confidentiality rules, President Adrián Vázquez?”

But not only from Puig, the room has ended up producing a political debate on the process, the 1-O and the court case, as confirmed by elDiario.es.

Indeed, the declaration of the three MEPs, who have argued that they are victims of political persecution, came just seven days after the Belgian Appeals Chamber rejected Puig’s Euro order. “The sentence is a sentence of the Judicial Power of a member state, of Belgium, and right now we are talking about a legislative process of the European Parliament”, said the president of the Legal Affairs committee, Adrián Vázquez (Citizens / Renew Europe) this Thursday morning: “They are two absolutely different things that have nothing to do with each other. The Legal Affairs Committee is not a court. I am not a judge. The members of the Committee are neither lawyers, defenders nor prosecutors in the procedure. We do not get to the bottom of the matter. We do not assess whether they are guilty or innocent. All we do is assess whether this request by a Member State is based on a vote or an opinion issued by MEPs in parliament, or if there is an interest in political persecution due to their work as MEPs. Neither more nor less. It is not our job nor is it my job to judge or issue opinions on judicial decisions. No no We rely on judicial decisions from Member States because it is not our role and just as we do not affect what they say, what they say does not affect the parliamentary process that is now developing. They are absolutely different things. ”

“I do respect the confidentiality rule of a committee chaired by a person who does not know if he respects them exactly the same,” said Puigdemont upon arrival, alluding to Vázquez: “It is a closed session and my duty is to keep silent I am calm. We are going to fight, just like when they said we were not going to be MEPs and they were wrong. ”

One of the elements of the defense is, precisely, the Belgian rejection of Puig’s extradition by the Supreme Court, considering that it is not the competent court, the same court that has requested the request of the European Parliament to judge the pro-independence leaders.

In this sense, Vázquez has acknowledged that the Legal Affairs Committee asked “the presidency of this Parliament to confirm which was the competent body to request the petition, not to judge them, which is what it is alleging from the Belgian ruling. it was done in December, and President Sassoli responded to me on December 21 confirming, with the support of the legal services of this chamber, that everything was in order. ”

Sources close to MEPs say: “One thing is the competent authority to transmit the request, which is what they consulted with President Sassoli, and another is the competent authority to request the lifting of immunity. Who requests the lifting of immunity it is the Supreme Court, specifically Judge Llarena. The one who transmits the request, until now, has been the Ministry of Justice, and this time the president of the Supreme Court has done it. ”

And the judgment of the Belgian Appeals Chamber concludes: “Since, on the one hand, it is established that Lluis Puig i Gordi was not a deputy of any (state) parliament so, in principle, he should be tried by a Catalan court and On the other hand, on the basis of the information obtained by the Public Ministry, it is established that the Spanish Supreme Court (national) has repeatedly declared itself competent to try all the co-defendants on the basis of the close connection between the crimes charged to each one of them without there being an explicit legal basis to extend this competence, it is found that in this sense there are well-founded reasons to believe that the execution of the European arrest warrant would harm the fundamental rights of the person concerned “.

“Regarding the times”, said the president of the commission “today it is very difficult to fix them due to the third wave of the coronavirus. There is still a lot of process left and now, after today’s hearing, that report will come that will also have to be translated into the official languages ​​of the Union and then it will have to be debated again in the Committee. Being very cautious and without being definitive, I think that by spring the process should be finalized. ”

Another issue that the lawyers of Puigdemont, Comín and Ponsatí allege is that in the three files the person in charge of writing the report that will collect the opinion of the parliamentary commission that, ultimately will be submitted to the vote of the plenary, is the ultra-conservative Bulgarian Angel Djambazki, from the group of the European Conservatives and Reformists (ECR, the Vox group). “It is a rotating system and I have to adjust to the rules,” said Vázquez. Djambazki arrived so late this Thursday to the session, that he entered the room when Puigdemont had already consumed half of his initial exhibition.

Sources from the Puigdemont, Comín and Ponsatí team question whether a single speaker has been appointed for the three MEPs because the regulation states that there must be one “for each immunity file”, as well as the political and legal implications that a deputy entails that he shares a group with Vox –but also with the Flemish nationalists of the N-VA, political allies of the independentistas in Belgium–.

“The decision of the rapporteur was taken in February and, basically, since the three reports were on practically the same situation, it was decided to focus them on the same one so as not to generate a comparative grievance between deputies. It is something that we see as natural and that in his day no group opposed. That is something for the committee and the rapporteur to decide, “says Vázquez, who adds:” I understand that the three deputies will want to influence the outcome of the deliberations. This is what they are doing through their lawyer, sending emails that I do not know exactly what their purpose is, because they are things that we cannot analyze, debate, or explain. We really cannot go into that. We cannot go into the substance or the form of the matter. a person who has always respected the law and I believe that the law is fundamental and that the norm has to be respected. Point by point. And that is my only task here. And I will try, of course, that within the committee, which is where me I have a certain authority, because that does not become a circus. Nothing else”.

The rules of the European Parliament allow rejecting a request if it is motivated by opinions or votes of the MEP in the exercise of their functions and also if there is a case of fumus persecutionis, that is, when it is concluded that the intention of the petition is “to damage the political activity of a deputy and, consequently, the independence of the institution.”

Thus, the basis of the defense of the legal team from Puigdemont, Comín and Ponsatí will be to argue that there is “political persecution” and that, as a consequence, they want to prevent them from serving as MEPs. They will also put on the table that the Supreme Court “is not a competent body” in all this, and that the three MEPs cannot be accused of acts that in other countries of Europe do not exist or are not a crime, and they remember that there are precedents in this point. “There are European courts that have already said that sedition does not exist, that the facts do not constitute a crime, like Germany,” they point out from the legal team, which warns that, depending on how the entire procedure is developed, the case it could end up in the Court of Justice of the European Union.