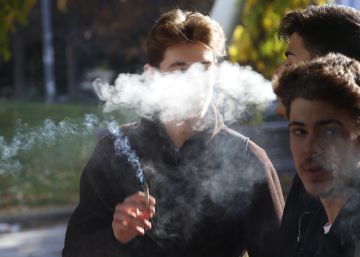 The National Health System will include for the first time a smoking cessation drug, which may be prescribed after a new protocol in primary care centers and from which the Ministry of Health estimates that some 70,000 people may benefit from the outset. The announcement was made by the acting Minister of Health, María Luisa Carcedo, who attends different summits on universal health in New York that have been convened around the UN General Assembly. So far, only Navarra has subsidized treatments against smoking.

The Ministry addresses an addiction that causes about 50,000 deaths a year in Spain, with the subsidy of the active substance of varenicline, whose trademark is Champix. The minister assured that she will take the varenicline to the next interministerial price commission, which is held on Monday. This is the last step to allow financing as a drug to undo tobacco. "It is a matter of weeks that enters the service portfolio," said Carcedo. Once approved, primary care physicians will have a prescription protocol in patients under treatment.

The National Smoking Prevention Committee, which brings together about 40 scientific and medical societies, has been claiming for two decades that the treatment of nicotine addiction should be part of the portfolio of primary care services. Because, he adds, proper treatment can multiply up to 10 the chances of quitting smoking compared to when the effort is done personally and without the right help.

"What we find with these new products of vaping is that we are not only facing medium and long-term damage, as with traditional tobacco," Carcedo warns. In the United States, the authorities have declared an "epidemic" by electronic cigarettes, which have caused severe pneumonia and even deaths Among the young population. States like New York have banned the sale of the flavored vapers, as well as it is proposed to impose Donald Trump. Countries and that already It has been taken in India.

The minister rejects the theses of multinationals such as Philip Morris, who market what they call "smokeless products": "It is being sold that they are to quit smoking, when for that there are scientifically proven and effective methods, which we now address in the National System of Health in an orderly, systematic and scientific way, with the appropriate treatments ".

"What we propose to the public, for which we are fighting and it is our responsibility, is that we want to breathe clean air, not air with other different pollutants, new pollutants on which there is a lot of uncertainty and serious doubts about its safety for health, "says Carcedo, who has been at the UN General Assembly these days to defend an improvement in air quality and universal health.

Carcedo recalls that his Ministry is working with the idea of ​​modifying the tobacco law and regulating new products related to vaping, places of consumption and advertising: "We will have to expand the content and scope of the law to respond to the new reality" .