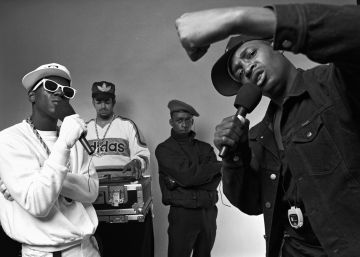 The new of Public Enemy It is not a record, it is a survival exercise. More than 30 years after blowing it all up with a couple of albums absolutely anchored musically and thematically at the moment, they not only keep their heads afloat here, but they do so using a series of weapons that on paper seem like a perfect recipe for be immediately banished to the corner of eternal irrelevance.

Those of Chuck D have been making mistakes in almost everything for more than a decade, unable to take advantage of the political situation and also inoperative when the musical trends insist on sending them messages so that they attend the great party of the hip hop of the XXI century. They are not asked to bring wine and / or dessert, only to arrive on time and participate in the after-dinner. But nothing. Insubstantial fights, parallel musical adventures based on just what you should never do (mixing rap and rock is discouraged by nine out of ten professionals) and even a totally outdated way of doing activism were about to turn the parents of the hip hop political in that type of parents with whom you start to think that it is best not to tell them anything about what you do, because they will not understand. Or worse yet, they are going to give you a lesson on how this was done in the eighties. You protest badly. And you dance worse, young people.

On paper, this What are you gonna do when the grid goes down? It seems like another nostalgic proposal made by some older gentlemen in the field of a genre that sooner or later we will have to begin to admit that, like rock, it begins to show old photos because it has not yet found a way to make its iPhone work . Factotums of the old sound like George Clinton and contemporaries like Cypress Hill, Nas or Mike D and Ad Rock from Beastie Boys collaborate. There are reviews of house classics, like Fight the power, and topics whose title is a play on words based on another historical cut, such as Public Enemy Number won. Everything seems cooked for a long and painful session of ‘do you remember …’. But no. For reasons that might escape reason, the disk works.

State of the Union (STFU) harnesses the unbridled wisdom of DJ Premier and the folly of Donald Trump to become an instant classic. GRID It is that success that their label offices knew they needed to make them stars in 1989 but that no one dared ask of them. Public Enemy Number won he appeals to nostalgia in all its forms, but he does it with festive emotion, almost dancing with tears in his eyes. You have to be very insensitive so as not to fall into their trap. In Go at it They do what they did and they manage to extract the last drops of creativity that remain after squeezing it for decades. In Rest in Beats Y RIP blackat they even suggest that they have understood the Run The Jewels records.

Public Enemy is unlikely to gain school-age adherents and a Tik Tok account with this collection of songs, as this is a record of redemption, not affirmation. It is greatly appreciated that they have poured so much energy into not losing respect and even had some strength left to run a few meters and catch that bus towards the relevance that in recent times they have so often missed. The past is theirs but the future holds almost nothing for them. Of course, the present has made a place for them to settle down. They can always say what they want, but on the condition that they also listen a little. 2020 is not going to last forever.

Public Enemy. What are you gonna do when the grid goes down? Def Jam / Universal