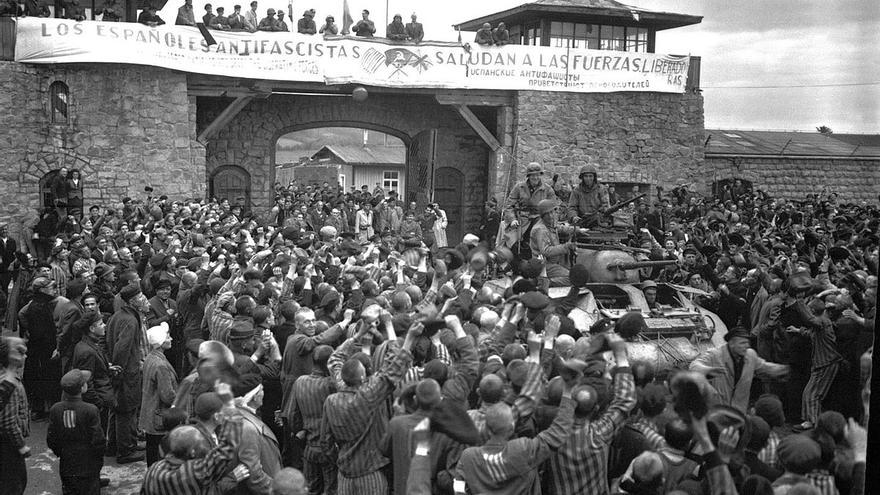 The Congress of Deputies will not hang on its façade a reproduction of the banner that the Spanish deported in the Nazi camp of Mauthausen unfurled when they were liberated by the allied troops and which read "The anti-fascist Spaniards salute the liberating forces". This was decided by the Congress Table at its last meeting, on April 5, with the votes against the PSOE, PP and Vox. The proposal of a group of relatives of those killed in Nazi camps, grouped in the Blue Triangle collective, only had the vote in favor of United We Can, parliamentary sources report.

The organization, which is part of the Association for the Recovery of Historical Memory, registered the petition on March 23 with the aim that around the beginning of May, and in commemoration of the liberation of Mauthausen, which occurred the On the 5th of that month of 1945, Congress will hang a copy of the poster. In the response sent in writing, the Congress Table informs the group that "it is not appropriate to grant the request [...]. Taking into account that it does not meet the criteria established by the same [la Cámara]”.

Blue Triangle regrets that "the votes of the PSOE, PP and Vox" refused to support the proposal, and with it, "rejected the commemoration of a momentous event in history," they assume in a statement. Sources from the PSOE leadership in Congress justify their position by assuring that the formation has not wanted to "make political use of the institutions." "We understand that it is something that has to be transversal," the same sources assure this newspaper.

The Blue Triangle collective and the Association for the Recovery of Historical Memory have already reproduced the banner in two sizes, six and ten meters, which they assure they will display in an act in front of Congress to "recognize those who sowed the seeds of this democracy ”, explains Emilio Silva, president of the ARMH. More than 9,000 Spanish citizens were deported to Hitler's terror camps. "The memory of the men and women who fought against fascism and never stopped doing so should be a source of democratic pride for Spain and an exemplary heritage for humanity," continues Silva.

The organizations have been very critical of the decision of the Congress Table and with the parliamentary groups that have voted against: "It seems that some political parties in the Congress of Deputies have not approved the first of the basic anti-fascism, which is the same than getting a bad grade in democratic culture”, affirms the president of the ARMH.