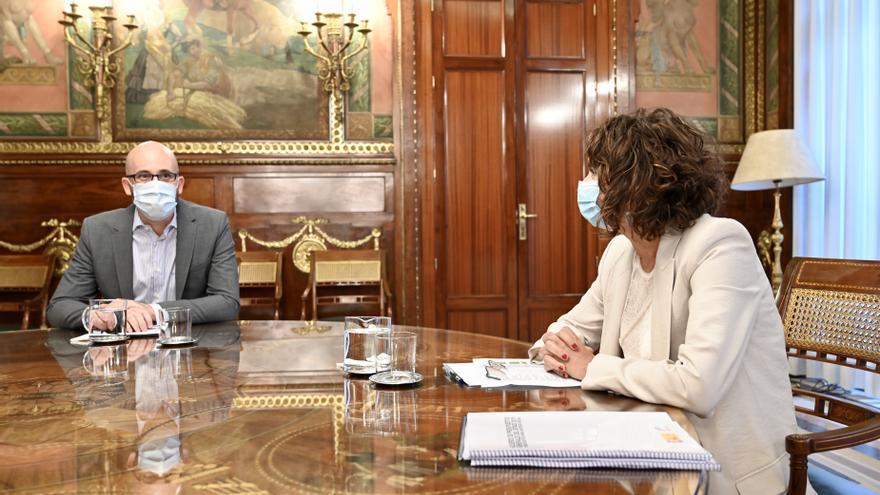 This Tuesday was one of the dates set on the calendar for the Council of Ministers to approve the draft General State Budgets for next year. It will not be like that, but it seems that it is a matter of days. PSOE and United We can have been negotiating for weeks to be able to unblock the public accounts for the next year, marked by the arrival of financial aid from Brussels. Two points hindered the agreement: the housing law and the tax reform. On this second point, both parties have shown in recent days a rapprochement around the measure of setting a minimum rate of Corporation Tax of 15%.

The proposal would mean raising the floor of what companies pay for this tax in Spain, in line with the international agreement sealed at the beginning of summer in the G7, the G20 and the OECD around a minimum of companies at a global level. If a consensus between the two parties that make up the Government goes forward, it would mean that this measure will be included in the next State accounts, instead of waiting for the tax reform that should arrive next spring.

The Ministry of Finance continues to refer to that date, once the report of the expert committee is available, which should analyze the alternatives to improve the Spanish fiscal framework, without having to advance the tax reform to the next budgets. However, sources from the socialist wing of the Government acknowledge that it is possible to advance some fiscal measures to the accounts that must be approved in the coming days and, among them, an agreement on this minimum type of companies could appear.

The Minister of Economic Affairs herself, Nadia Calviño, responded affirmatively this Monday in an interview in El País to the possibility that the minimum rate of 15% is a reality in the General State Budgets. "Yes [sería razonable]. It is an issue that we are defending at the international level and that does not imply a significant change in our tax system, "stated Calviño in the aforementioned media. Regarding the Housing law, where the agreement seems more distant, the first vice president of the Government defended that the plan was to have it before the end of the year and that the two issues should not be linked.

This Tuesday, Txema Guijarro, spokesperson for the Congressional Finance Commission, assured during the processing in the Lower House of a non-law proposal (NLP) on corporate tax reform that "we are close to reaching an agreement of the minimum rate 15% ".

During the last days, different Podemos members had redoubled public pressure for the Government to make the decision to apply this measure in the general budgets that are being gestated. The Minister of Social Rights and secretary general of Podemos, Ione Belarra, assured on social networks this Sunday that "it is the best news that the PSOE opens for the first time to set a minimum tax of 15% on budgets."

The deputy secretary general of the PSOE, Adriana Lastra, said for her part this Monday that "there will be agreements shortly" in matters of General State Budgets. Lastra did not want to advance the progress under the premise that it corresponds to the members of the Government, but assured that the understanding is close in response to the journalists' question about Calviño's words. "There are many debates but the important thing is that there are agreements," said Lastra.

This Tuesday the Finance Commission in Congress had to vote on an NLP proposed by United We can, demanding that the Government have an "active participation" in organizations such as the OECD in the debate and the implementation of this global minimum tax. The measure had been presented last June, before the international agreement came to fruition, and it did not value the implementation in the General State Budgets of this proposal. However, it has served to show the harmony in this matter between the two groups that make up the Government, having been approved with the support of the socialist group.

The objective set out by the President of the Government, Pedro Sánchez, for the General State Budgets was to have us approved within the formal calendar for the processing of public accounts for next year. However, the absence of the agreement between the two Government partners has forced it to be carried over to the next few weeks and there are those who speak that the process is in the cut-off time before its approval in the Council of Ministers, at the same time that the the Minister of Finance, María Jesús Montero, and the Minister of the Presidency, Félix Bolaños, are working to get the accounts going in Congress.

The Government has already carried out the steps prior to these accounts, such as the approval of a new spending ceiling. The new limit, although it represents a record in Spain protected by European aid and the still persistence of the Government's social shield, is only slightly higher than the one reached in 2020. In addition, they have also been suspended, with the endorsement of Congress, the fiscal regulations that established a mandatory deficit for the Autonomous Communities, which remain in recommendations.