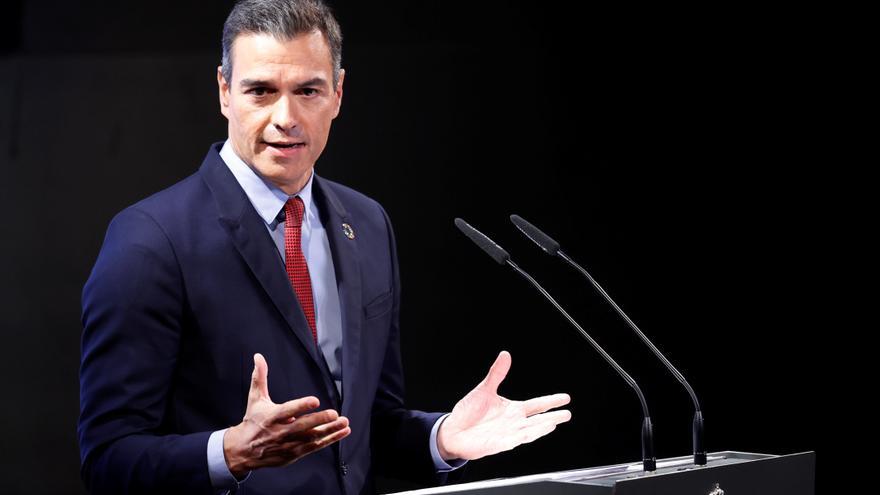 Pedro Sánchez considers the conflict that the coalition government has undergone in recent days to be settled as a result of the imminent negotiation of the 2021 General State Budgets. President parked the differences with Pablo Iglesias in a meeting this Monday in Moncloa in which they agreed that the draft of the budgets will be agreed by the two factions of the Executive and that the minority partner will be involved in conversations with the rest of the political groups. In this way, the malaise that United Podemos had due to the attempt of Inés Arrimadas to put aside those of Iglesias in the negotiations and that had caused a threat of rupture on the part of the formation of Iglesias, which assured this Friday to be “incompatible “with Citizens.

“There has been no veto,” the president assured in an interview on Cadena SER this Tuesday in which he assured that both the PSOE and United We can are “aware that budgets have to be progressive and cannot be exclusive”. That is to say, Iglesias assumes that all political groups will be discussed, including PP and Ciudadanos, although it is the Arrimadas party in which the PSOE has pinned its hopes to carry out the project that is essential for the durability of the legislature. At the same time, Iglesias ensures that he is involved in the negotiation of public accounts with the rest of the political actors. “All interlocutors have to recognize that this is a coalition government,” Sánchez declared.

After the discrepancy that the leaders of Podemos verbalized and that motivated a meeting between Sánchez and Iglesias to settle the problem, the Minister of Finance María Jesús Montero, will sit down this Tuesday with the Secretary of State for Social Rights, Nacho Álvarez, to start the budget preparation work, as reported by Moncloa in a statement early this Tuesday.

Sánchez has emphasized the need to update public accounts, which have been extended since 2018 to have the capacity to “absorb” and “convey” the funds that will arrive from the European Union to reactivate the economy after the COVID-19 pandemic, as is as the twenty-seven agreed in July. “We dragged some 2018 budgets that had nothing to do with an economic and social emergency, which were approved by the conservative party and which do not include elements to deal with social emergencies or to convey the funds that are going to come from Europe,” explained the President, who has assured that “it is urgent” to carry out a new budget project.

The president will address the negotiation of the accounts with the political leaders in the meetings that he will hold during Wednesday and Thursday. Although it will be transferred to Pablo Casado, the government is aware that the PP is not willing to pave that path. Sánchez has defended himself from criticism from the opposition leader, who accuses him of not having kept him informed during the pandemic. “I am willing to make amends, to be a person who recognizes mistakes; but two do not dance if one does not want to,” said Sánchez, who recalled that the coalition is experiencing the same “ruthless opposition” that José Luis Rodríguez Zapatero and José Luis Rodríguez Zapatero had in front of. Felipe González.

The hope for the socialists for the budgets is in Arrimadas, who has shown willing to support the public accounts. However, the preference of United We Can is to bet on the parliamentary majority of the investiture. That was also the intention of the PSOE, but now the Socialists admit that the ERC path is almost impossible.

“The government agreement will be the proposal that materializes in that draft, but we will have to speak with strategic partners for the stability of the Government, such as the PNV and many other parties of the parliamentary arch,” the president said. Asked if he no longer trusts ERC, Sánchez has not wanted to rule out that route that he has not mentioned when talking about those alliances in which he has pointed to the Basque nationalists. “On many occasions I listen if we do not want to dialogue, there we are willing to meet in September, whenever the Government wants,” he said about dialogue with the Generalitat, which is a requirement of the Catalan Republicans, but which President Quim Torra has frozen .

Sánchez has not wanted to enter another of the main discrepancies between PSOE and United We Can: the monarchy. “It is clear that the PSOE and United We can have a different political culture,” he said about the debate on the state model proposed by those of Iglesias and that he discarded: “We defend the constitutional pact and it is not divided.” On the abandonment of Spain by Juan Carlos I, the president did not want to pronounce himself beyond highlighting the “work that the Royal House is doing and the effort it has made to separate itself from these supposed non-exemplary practices.” Asked if he tried to prevent the king emeritus from ending up in Abu Dhabi, he appealed to the “confidentiality” of his dispatches with Felipe VI, although he acknowledged that “they were not the terms of the conversation.”

On the evolution of the pandemic in Spain, Sánchez has valued the management that the central government is doing by making available to communities material resources -such as military trackers-, digital -such as the Covid Radar application-, legal -the offer of a territorialized state of alarm – and economic – the non-reimbursable fund of 16,000 million. However, it has acknowledged its concern about the epidemiological situation in the Community of Madrid, which is the one with the worst data. “Strategic capacities have to improve,” he warned the Government of Isabel Díaz Ayuso.

In addition, he has defended Fernando Simón from the criticism of the regional president, who accused him of “cruelty” for highlighting that the Community of Madrid is the one with the most contagions and showing his concern. “If Simón sent that message from Health, I believe that what we are transferring is that we are concerned about the state of public health and the evolution of the epidemic in Madrid,” said Sánchez, who has again appealed to the need to park the “fight partisan “and” strengthen public institutions “:” There is no virus of the left or of the right, there is an enemy that is the virus. ”

He has also defended himself against accusations of inaction in the management of some issues such as back to school, which he has ensured that it will be safe. “The risk in the epidemic is not zero, but there is a risk that we do have to avoid, which is the risk of social exclusion due to not going back to school,” said Sánchez, who assured that with the guide of recommendations approved by the last Thursday Education and the autonomous communities “parents and the educational community can be sure that their children and workers will be much safer in educational centers than elsewhere.”

Regarding the conciliation measures for parents who have to take care of their children in case they have to quarantine, Sánchez has assured that “there is a disability leave that is regulated by Social Security and parents who have this eventuality they will be able to take advantage of it “.